New York artist Sophia Wallace wants you -- and everyone you know -- to be cliterate.

"It's appalling and shocking to think that scientifically, the clitoris was only discovered in 1998," Wallace told The Huffington Post from her Brooklyn studio last week. "But really, it may as well have never been discovered at all because there's still such ignorance when it comes to the female body."

The clitoris, described as the only human body part that exists solely for pleasure, is not merely a little "button" hidden between a woman's legs, but rather a large, mostly internal organ many people don't know about, Wallace explains.

According to a 2011 post by Museum of Sex blogger Ms. M, the internal clitoris (highlighted in yellow in the images above) is a complex erectile structure consisting of two corpora cavernosa (that are said to wrap around the vagina when erect), two crura (erectile bodies that branch out from the clitoral body), clitoral vestibules or bulbs, and the clitoral glans (the part that you can see).

In 1998, Australian urologist Helen O’Connell published a paper in the Journal of Urology describing the sheer scope and size of the clitoris. She wrote that the unerect clitoris, most of which is not visible, could be up to 9 centimeters long -- longer, as some have described it, than an unerect penis.

As Robert King, professor at Ireland's University College Cork, explained in a July post on Psychology Today, the true anatomy of the clitoris had actually appeared in scientific literature as long ago as the mid-1800s. However, King writes that O'Connell's research shed light on the clitoris like no one had before.

Last year, during her tenure in the Art & Law Residency, Wallace started work on a multi-media project that she hoped would serve to challenge these misconceptions and to lift the veil on this enduring ignorance about the female body.

Aptly entitled "Cliteracy," the project, which is ongoing, includes Wallace's "100 Laws of Cliteracy," street art about the organ, as well as a "clit rodeo" that involves an interactive installment of a giant golden clitoris.

Scroll down to learn more about Wallace's project:

"I wanted to talk about female genitals in a way that I felt wasn't really being talked about," Wallace said. "For me, this word 'cliteracy' perfectly breaks down the idea of the project. It's this pithy, wonderful little word that encapsulates so much so quickly and so simply. It illuminates this idea of total illiteracy and incompetence when it comes to the female body." 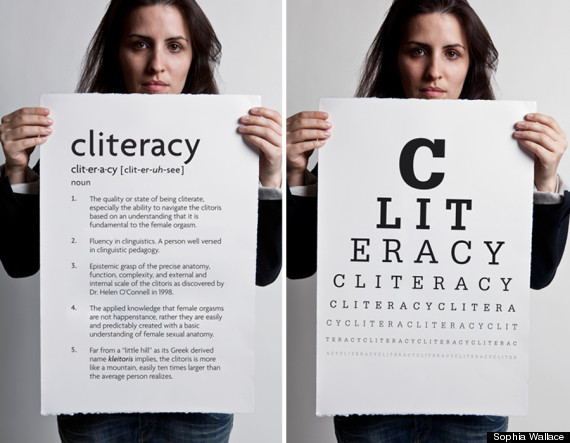 The "100 Natural Laws of Cliteracy"

Spanning 10 feet by 13 feet, with a 6-foot neon "Cliteracy" sign suspended from the ceiling, Wallace's "100 Natural Laws" installation is, as she describes it, "monumental in scope and scale."

"I wanted to create something so big that it would make everyone, including a football player or basketball player, feel small next to it," she said. "You can't just glance at it and expect to have gotten it. You have to spend time with it and think about it." 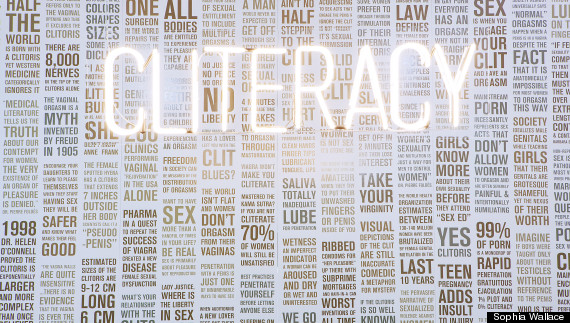 "I chose to use the language of Natural Law because its authority precedes the mandate of states, countries and religious bodies. Natural laws are inalienable. In much of the world women do not hold dominion over their own bodies, and even in this country, women are too often acquiescing to sex acts that do not give them pleasure," she told Creem. 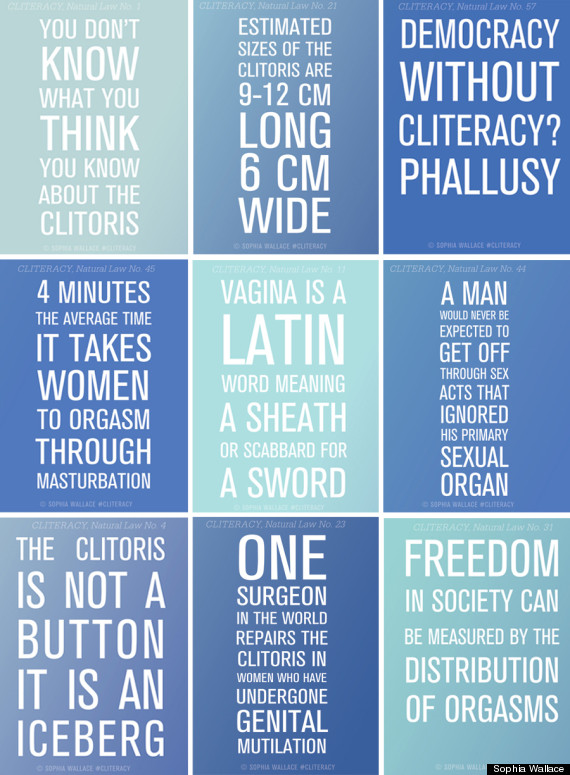 One of the most fascinating of Wallace's "100 Laws" references the story of a French doctor named Pierre Foldes who, thanks to recent research into the anatomy of the clitoris, came up with a method of repairing the damage caused by female genital mutilation. By removing scar tissue from the vulva and lowering -- and revealing -- a portion of the internal clitoris, he has been able to restore pleasure to thousands of women who have been circumcised.

Until recently, Foldes is believed to have been the only doctor in the world who was carrying out this particular surgery. More doctors have since adopted his methods.

“When I returned to France to treat genital mutilation, I was amazed that they were never tried," Foldes said, according to a 2011 Museum of Sex blog post on the internal clitoris. "The medical literature tells us the truth about our contempt for women. For three centuries, there are thousands of references to penile surgery, nothing on the clitoris, except for some cancers or dermatology -- and nothing to restore its sensitivity. The very existence of an organ of pleasure is denied, medically."

To get people talking about the clitoris, Wallace has been taking to the streets of New York City, plastering walls with cliteracy-related posters and slogans.

"This is an advertising campaign for the clitoris," she said of the unauthorized street art installations. "After all, who needs an ad campaign more than the clit?"

"This work has never meant to be behind the white walls of a gallery. It's really about cliteracy becoming a meme and creating new language for bodies and sexuality," Wallace said, adding that she wants to soon take her street art project global. 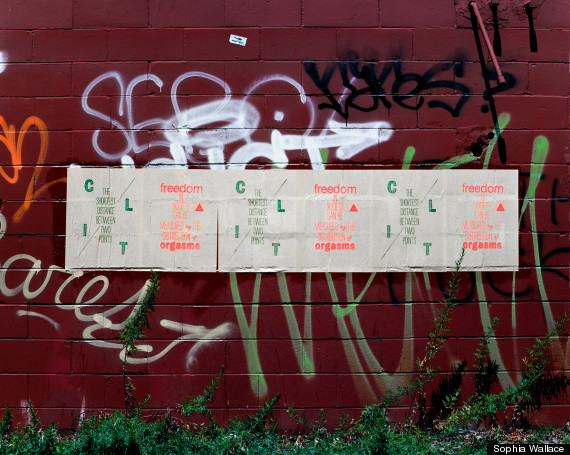 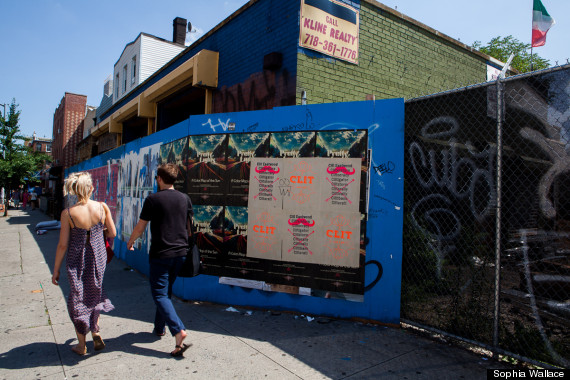 With the help of sculptor Kenneth Thomas, Wallace created an anatomically accurate -- and rideable -- golden clitoris that debuted at the Wassaic Project Summer Festival in New York, earlier this month. The giant organ was the star of the "Clit Rodeo," an interactive performance that involved members of the public performing and dancing with the giant clitoris for prizes.

"[It was] an invitation for audiences to experience a space free from traditional shame, taboo and silence usually cloaking conversations around sexuality, particularly female genitals," said Wallace, who intends on bringing the "Clit Rodeo" to other parts of the U.S.

"People couldn't stop looking at [the clitoris], touching it riding it, being around it," she added. "It just had this aura about it. It wasn't just women on the clit, it wasn't just the men, everyone was engaged." 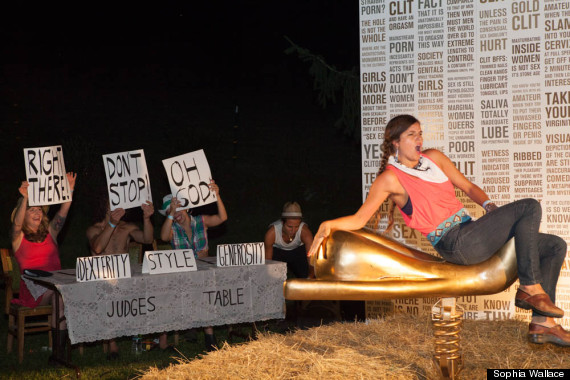 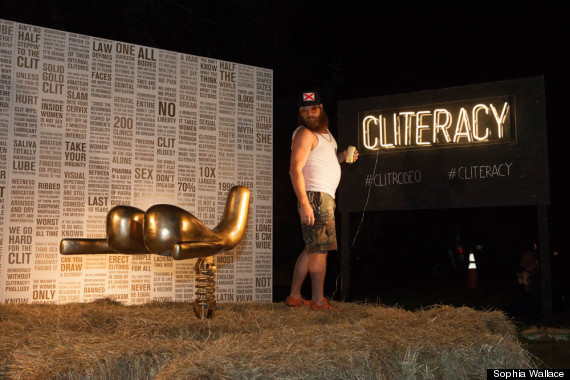 "If you see a man walking around with a 'solid gold clit' shirt, it creates this social experiment -- what does it mean to have a 'clit' on your shirt? It's just interesting to see these words out in the world and to see how they operate and how people respond," Wallace said of her line of clothing featuring cliteracy slogans.

"It's cool to see how much dialogue can be opened up. Ultimately that's what the goal is -- to open up a conversation," she added. 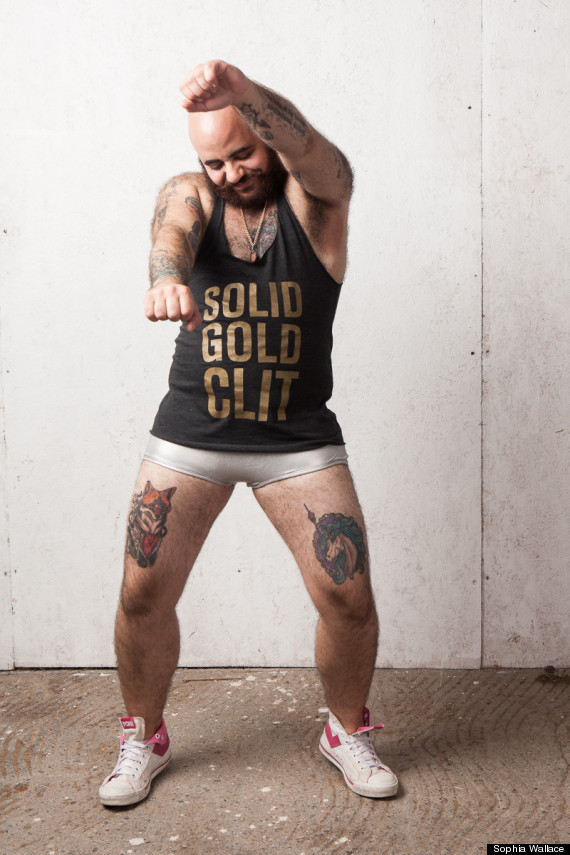 Wallace says that her cliteracy project has gone viral since its launch, triggering a great public response both at physical exhibitions, as well as online on social media platforms like Tumblr.

"It's been a showstopper wherever its been shown. People are hungry to be able to talk about this," she said. "I'm thrilled that it's gone viral and I hope it'll continue to be shared. I absolutely want people to talk about it -- and really, the effect is only beginning."

Cliteracy, says Wallace, is really something that everyone should care about.

Though the project may seem limited to the discussion about women's bodies and female sexuality, Wallace insists that it's really much, much bigger than that.

Not only is the project for everyone ("I love seeing men standing up for the clit," Wallace says, adding that this is a conversation that liberates people of all genders), but she says that the clitoris can be seen as a "metaphor for freedom, body sovereignty and citizenship."

"Cliteracy is about not having one's body controlled or legislated," she said. "Not having access to the pleasure that is your birthright is a deeply political act."

"To me, this has always been about a bigger conversation. It's about breaking down walls."

For more about cliteracy, watch Wallace explaining the details of her project in the video above and click through this slideshow listing some of the "100 Laws":