The new issue of In Touch Weekly has a bathing suit photo shoot of Cloris Leachman and an interview about her looks.

Here is a release sent out by the magazine, for the full thing pick up the issue.

While it's hard to believe the always-animated Cloris Leachman could ever be shy in front of a camera, slipping into a bathing suit at 83 years old managed to trigger some nerves. But after a few test shots -- and a margarita -- Cloris found her groove. "It felt good," she tells In Touch. "I couldn't believe it. It's not like I feel like I did when I was 20, but I was completely comfortable." She believes her healthy lifestyle keeps her feeling and looking young. "I've taken care of myself all my life," she reveals. Cloris shares her swimsuit secrets and much more with In Touch.

In Touch: Well, you look incredible -- what's your secret? 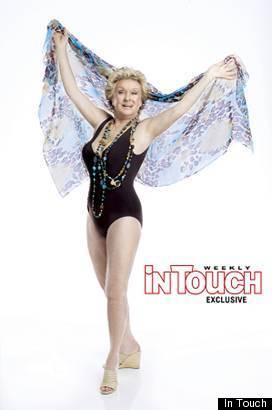 Cloris: It's from making the right decisions. I always wanted to be healthy and look good. I taught myself in my mid thirties about eating right. I actually became a vegetarian at 35. Eating right really is the secret.

In Touch: What's the best diet tip you've ever heard?

Cloris: Well, if you brush your teeth, you don't want to eat something right after because your mouth feels so fresh. So brushing your teeth actually prevents you from eating until later.

In Touch: What do you think about all the young women getting Botox and other procedures in their twenties and thirties?

Cloris: It's a shame. I like that we're able to improve ourselves, but most of the time, I think people go too far.

In Touch: Have you ever done Botox?

Cloris: Well, one time, yes. I was shocked. And my daughter just started laughing because I'd lift up my forehead and there wouldn't be any wrinkles except high above. And it lasted about six months.

In Touch: Would you do it again?

Cloris: No! It was ridiculous. You can't just have part of your face not moving and the rest moving everywhere. That doesn't work.