Rising popstar iRAWniQ and innovative director JB Ghuman Jr. (SPORK) have just made one of the most visually arresting videos ever, with ALIENPU$. ALIENPU$ is about having an intimate encounter with a woman for the first time," explains iRAWniQ, "about being introduced to foreign territory... about being an alien to the p***y." The duo previously collaborated on her first single, No One Said It Would Be Easy. This time around the mission was different. Says Ghuman Jr., "There are seven looks total in the video: Rosa Parks Raw, Reptilian Raw, Flower Power Raw, North Pole Princess Raw, Emerald Energy Raw, Orion's Belt Raw and Pastel P***y Raw... each chapter is titled for easy reference in the video, for anyone whose interest is piqued, so they can figure out the bigger picture if it doesn't slam dunk you in the face."

Long time Ghuman collaborator and legendary actress Tatum O'Neal guest stars alongside interactive animation by Dave Woodman (He-Man, The Little Mermaid). I spoke to the superstar duo about the song and video. 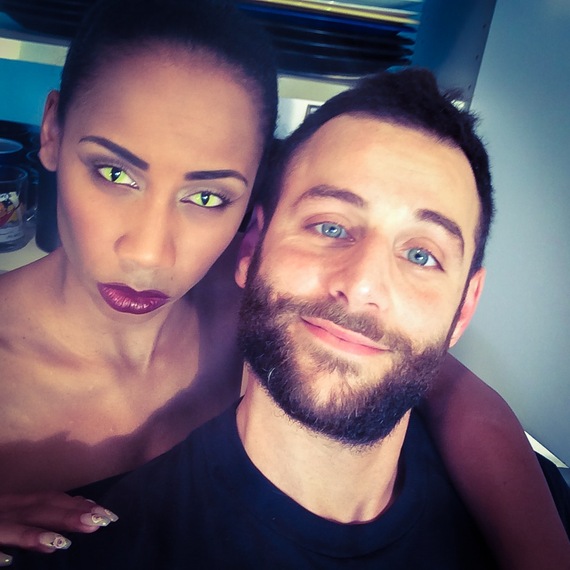 What's changed artistically since your first single/video No One Said It Would Be Easy?

iRAWniQ: No One Said It Would Be Easy was one of the first songs I wrote
when I moved to Los Angeles, from Grand Rapids Michigan. Although I had bits and pieces of the song composed, I didnt have the instrumental. It was when I was introduced to Yotam Da Prophet (sick ass hip hop producer) in LA that I knew the song would soon be completed. NOSIWBE is about the struggle. The adversity. The ambition. It was and is very real. I've been in LA a couple years now. I'm learning the way of things..the culture..art scene...the people. I'm more familiar with my surroundings and it makes it easier to create when you have a better grasp on things... when you have more stability. Alien Pu$ is more of a celebration... freedom... awareness... security. It's not only about being one with yourself but being able to make someone else feel comfortable with themselves. I've had my share of chicks that I've made feel comfortable (smiles).

Where did the iRAWniQ handle come from?

iRAWniQ: iRAWniQ has been my alias for about 10 years now. When I started writing it was under the name "Charizma," which is similar to my first name, Carissa. But it wasn't edgy enough. It wasn't RAW. iRAWniQ is the RAW. The Real. She has charisma but she also doesn't take shit. She's humble but aware.

How do you self identify?

iRAWniQ: Self identify? I don't know what that means (laughs). I identify with myself. Are you asking if I like women? Because I do. I mean don't we all? Women are QUEENS and I love, appreciate and uplift and empower my fellow Queens whenever possible. I love all people, although I appreciate GOOD people. It's almost the IN thing to say "I hate labels"... and honestly I don't hate much of anything; great character goes a long way with me.

How does your work dovetail with being a mom and what's the biggest impact your son has had on your life?

iRAWniQ: Being a mother and being three thousand miles away from family isn't easy, let me tell you. It can be frustrating at times. I don't have the convenience of grandma to drop D off when I'd like. Spare time is a blessing. I have to make constant decisions whether to hit the scene or stay home. But it's really all about balance. I'd rather stay at home though to be honest. I'm a recluse. When you have an amazing child... the responsibility to prepare him for life, that's a blessing... there isn't much that trumps that situation. I used to write songs on my phone with one hand while rockin' him to sleep with my other arm... I know I need to get out and network more... I'm told that... but I love spending time with my son. I love watching him grow and picking his amazing little brain. My next venture is to create an amazing home studio. That way I can create and still be home with my son. That would be amazing.

JB, how you synthesize all of this into visuals?

JB Ghuman Jr.: I went from being an installation artist to a film director so the way my 3rd eye works is I tend to layer visuals first with the artist then allow my own hidden slant to merge with it. I had been seeing lots of Hollow Earth theory visuals in my mind, on top of other things, while I was hiking through the location where we shot all the nature scenes. As the track was floating in my skull, I knew, as soon as I came upon it, that I'd found the perfect spot to shoot the video. RAW and I are not just creative allies, but close friends. On an intimate level, RAW likes to keep her body and sexuality in the zone of the masculine and a bit hard. It's no surprise with her name, that once meeting RAW you quickly find out she's a "take-no-bullshit" type of gal. No wind machines, no beat face, no long legs. More like a mic, a single light, an oversized snapback and a beat... that's her swag. I asked if she'd go nude, given that underneath all of that, there lies this super soft and sensual women that she keeps safe from the world. I had asked if she'd hang naked upside down... she laughed and said "no" on the spot. Time went on... and eventually she said "yes" to it, though only under the terms that she look strong as opposed a typical video hoe begging for attention. I saw all the giant brown rocks and thought of her tough exterior and beautiful chestnut colored skin. She understood the connection of the rock to her own energy and boom... the video was green lit.