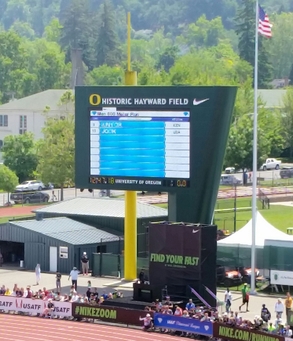 Eugene, OR - A capacity crowd of 13,278 filled Hayward Field on a perfect sunny day with temperature in the mid-70's for the Prefontaine Classic. This year marked the 40th anniversary of Steve Prefontaine's passing and the Diamond League event bearing his name did not disappoint. Quite a few meet and national records fell and many events ended in thrilling finishes.

In the signature event which closed the competition, the Bowerman Mile, Djibouti's Ayanieh Souleiman edged local favorite Matthew Centrowitz and Kenyan Asbel Kiprop in a time of 3:51.10. The top three finishers crossed the line within .15 second of each other. Centrowitz "felt good with 200 to go, thought (he) was going to pull it off but (knew) Souleiman has that extra gear...so wasn't underestimating (his) finish by any means."

Another local runner, Oregon Track Club Elite's Ben Blankenship made a late surge on the inside to win a photo finish in the men's International Mile in 3:55.72. Blankenship topped two Kenyans, Timothy Cheruiyot and Jonathan Kiplimo Sawe at the tape, beating Sawe by .04 of a second.

The most impressive performance was in the women's 5000 where Genzebe Dibaba of Ethiopia blew away the field, winning in a time of 14:19.76 which was a meet and field record, the fourth fastest time ever as well as the fastest time ever run in the United States. Dibaba finished ahead of her closest competitor by over 12 seconds and was voted the Most Outstanding Performer of the event. Boulder, Colorado's Jenny Simpson held off Kenya's Mercy Cherono in the women's 1500 meters in 4:00.98, by .28 of a second. In that race 18-year-old Alexa Efraimson, from Camas, Washington and running as a professional, finished seventh but broke the American junior record in a time of 4:03.39 topping Mary Cain's mark by over a second. 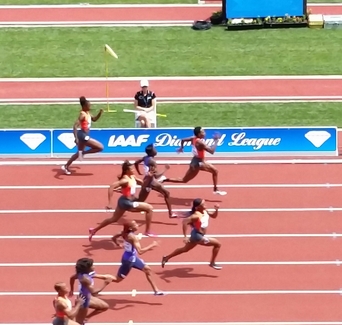 Both women's 100 meter races were also photo-finishes. Five-time world champion Shelly-Ann Fraser-Pryce of Jamaica won the Elite 100 by edging out Ivory Coast's Murielle Ahoure by .01 second in a time of 10:81. Prior to that, another local favorite, former Oregon runner English Gardner, won the International 100 nipping Jamaica's Elaine Thompson with both runners finishing in 10:84. Gardner came back from a lost 2014 in which she suffered two torn hamstrings and was emotional in the post-race interviews. "I don't think people realize how rough this sport is," Gardner said, "I feel like I was on top of the world...and fell all the way to the bottom".

There were several anticipated head-to-head rivalries. In the men's 400 meters Grenada's Kirani James blew away the USA's LaShawn Merritt by .56 of a second. Merritt is still coming back from a knee injury and James was on the top of his game in winning the event for the second straight year. Allyson Felix outlasted Sanya Richards-Ross in the women's 400, winning in 50:05 seconds to Richard-Ross's 50:29. It was Felix's first 400 of the season while Richard-Ross came into the event with the top mark in the world this season of 49:95.

Tyson Gay, running after receiving a one-year ban after a positive drug test, won his first Prefontaine Classic event, edging fellow American Michael Rodgers in 9:88. Rodgers finished in 9:90. Bingtian Su became the first runner from China to finish under 10 seconds in the event with a time of 9:99. Justin Gatlin had the second most impressive showing with a dominant 200 meters, winning in 19:68 seconds, well ahead of Jamaica's Nickel Ashmeade (20:18).

Frenchman Renand Lavillenie highlighted the field events with a meet and Hayward Field pole vault record 19 feet 10 1/4 inches. He failed three times at his world indoor record of 20-2 1/2. Lavillenie was competing after injuring his right shoulder in a fall two weeks ago.

In all, there were five meet records, four national records and 13 world leading marks of the season. It was a memorable day at historic Hayward Field.