Our parks are in crisis. As cities and states across the country face record-breaking budget deficits, Parks and Recreation Departments are being forced to reduce hours, lay off staff, trim back maintenance efforts, and close some parks altogether.

The situation is so severe that "America's State Parks" are number one on The National Trust for Historic Preservation's "11 Most Endangered Historic Places" list. According to a recent survey, as many as 400 state parks are in danger of closure. Here are some other depressing numbers:

On the city level, the outlook is equally grim:

It may even be worse for smaller towns, many of which have frozen their capital budgets. Montvale, N.J., which has a population of about 7,500, is cutting its Parks and Recreation budget by 53 percent, the largest of all its budget cuts.

Like any living thing, parks need care and attention to thrive. Back in January, The Denver Post outlined the heartbreaking situation in Colorado Springs:

The parks department removed trash cans last week, replacing them with signs urging users to pack out their own litter. ...Neighbors are encouraged to bring their own lawn mowers to local green spaces, because parks workers will mow them only once every two weeks. If that. ...Water cutbacks mean most parks will be dead, brown turf by July... 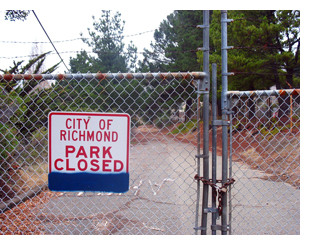 A closed or ill-maintained park becomes vulnerable to vandalism and crime. A playground covered in graffiti invites more graffiti; a field scattered with trash invites more trash. A single park closure can launch a vicious cycle that changes the entire character of a neighborhood. It can also lower property values and deter tourists.

In fact, as parks writer Anne Schwartz points out in Gotham Gazette, "...when parks are well-maintained, attractive and accessible, the economic boost they provide - in increased real estate values, tourism dollars, jobs and tax revenues -- far outweighs the cost of upkeep."

Money talks. Why aren't the axe-wielders listening? Why slash park budgets when they have the potential to bring in more money than they cost to run?

It's tough to close a deficit. I appreciate the challenges that city and state officials are up against, but the money saved in the short-term isn't worth the long-term damage. Parks, wrongly considered a "luxury," are the first to be cut and the last to recover. Even when the economy eventually turns around, the costs involved in re-opening parks and stepping up maintenance efforts are going to be staggering. By forcing closures and deferring maintenance, we're not only failing to invest in our communities and children, but we're also failing to make a sound economic investment.

How can we take matters into our own hands? Perhaps we can turn to private-public partnerships, which, by avoiding the webs of government bureaucracy, leave more room for agility and innovation. As one of many examples, Central Park's zone management system, headed by the privately funded Central Park Conservancy, holds gardeners fully accountable for one of 49 designated zones. The system has vastly improved park maintenance efforts, and by also involving volunteers, has strengthened community stewardship.

Private-public partnerships present some interim solutions, but in the long-term, charging down this road is fraught with perils. If we want a park system that truly serves the public good, we can't let private interests dictate which parks receive money and which do not. Ultimately, government must step up to the plate. Perhaps this means intervention on a federal level to ensure that our local parks not only survive, but thrive.

One thing is clear--hundreds of parks have already closed, and hundreds more will soon meet the same fate. Park declines mean parallel declines in our health, our neighborhoods, and our local economies. Wringing our hands won't do any good--how can we put our heads together and act now?