It may seem strange to find connections between cardiovascular physiology and the Quran, but I found myself linking the two while learning about the jugular vein in medical school. I remembered the Quranic verse:

"And indeed We have created man, and We know whatever thoughts his inner self develops, and We are closer to him than (his) jugular vein." (Quran 50:16).

I was amazed that a document first recorded nearly 1400 years ago would make reference to such a specific part of the human body, and I began to reflect on how the clinical significance of the jugular vein might relate to Islamic beliefs.

There are actually four jugular veins, one internal and one external, on both right and left sides of the neck. These veins carry deoxygenated blood from the brain towards the heart. 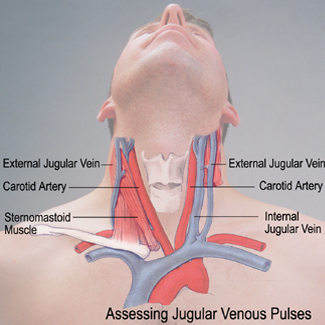 Since they are quite large and located in the neck, jugular veins are vulnerable to attack: severing them can cause death due to rapid loss of blood. First, the Quran may be implying that one should trust in God's absolute power; even at the most vulnerable point in your body, God is there to protect you. This is similar to Psalm 23:4 in the Bible, when King David remarks, "Though I walk through the valley of the shadow of death, I will fear no evil, for thou [God] art with me."

I find it interesting that the Quran mentioned critical veins of the head, rather than those of other organs that are just as important. Indeed, severing other large veins in the thigh, heart, or liver, for instance, would also cause death. Many Muslim traditions hold that humans are inherently special because of our intellect and ability to use reason. Indeed, science shows that our highly developed brains are what distinguish us from other animals. Perhaps the Quran is suggesting that faith is closely intertwined with rational thought.

The jugular veins, due to their high internal pressure and prominent appearance, are also useful places to put intravenous lines when treating patients. Intravenous lines can provide nutrition and medications, and allow a physician to obtain blood samples that are useful in diagnosis. Thus, the Quranic verse may also be implying that you will need food, water, medicine, and other material things to sustain life, but faith is also critically important. Everyone will die at some point, and when modern medicine is no longer sufficient to sustain your physical body, faith may be able to provide some comfort.

To me, this Quranic verse enjoins humility, one of the highest virtues in Islam. One must be extremely careful around jugular veins; although they can be sites for IV medications and nutrition, complications such as thrombosis (formation of a blood clot that obstructs blood flow) can be life threatening. Sometimes, health providers are unable to save patients despite their best efforts. In these situations, we must take comfort in knowing that some force beyond our control (whether we believe in God or not), was involved.

Whenever I need a dose of optimism, I remember a saying attributed to the Prophet Muhammad (peace be with him), "There is no disease that Allah has created, except that He also has created its treatment" (Sahih Bukhari). While this quote may be far too optimistic (at least for my lifetime), it reminds me that choosing to study medicine was one of the best decisions of my life. I look forward to finding more connections between my future profession and my faith as I learn more about the incredible human body.