After a journey of more than nine years and about 3 billion miles, NASA's New Horizons spacecraft has made its closest approach to our solar system's beloved dwarf planet. Next, the spacecraft is expected to beam back the most detailed images of Pluto ever taken.

Pluto sent a love note back to Earth via @NASANewHorizons. This is the last image taken before today's #PlutoFlyby. pic.twitter.com/a2AE20LHcR

The unmanned New Horizons spacecraft got within 7,690 miles of Pluto -- which was closer than expected -- zooming by at about 30,800 miles per hour. Scientists plan to analyze data and images that the spacecraft's suite of seven science instruments gathered during the flyby.

"I can't wait to get into the data and really start making sense of it. Right now, we're just standing under the waterfall and enjoying it," Dr. Alan Stern, principal investigator for the $700 million New Horizons mission, told BBC News. 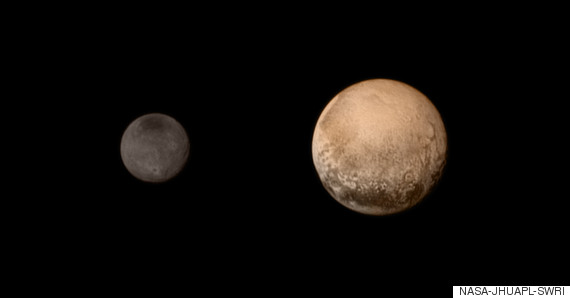 Pluto (right) and one of its moons Charon (left) display striking color and brightness contrast in this composite image taken on July 11.

New Horizons not only has set out to investigate Pluto but also the icy world's five moons: Charon, Styx, Nix, Kerberos and Hydra.

As Dr. David Grinspoon, astrobiologist at the Library of Congress, said at the American Museum of Natural History after the spacecraft made its closest approach to Pluto, "We have now expanded our idea of the universe we live in."