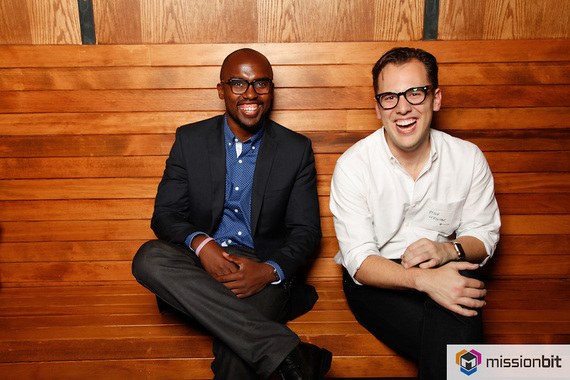 "The best way to predict the future, is to create it" - Abraham Lincoln

San Francisco is the epicenter of the innovation economy. These 49 square miles that I know and love are considered the premier international gathering place for those looking to impact the world through the latest technology. Many have likened the tech-fueled surge in new residents to the growth the city experienced during the 1849 gold rush, where settlers from all over the world sailed to the city by the bay to strike it rich. It goes to show that our city has long been a place for dreamers, the ambitious, and a place where ideas are tested and brought to fruition.

For some, however, the opportunities that draw so many from around the world to San Francisco can seem specious. I was born in San Francisco and am one of its rare native sons. Having grown up in a family of meager means, the city I experienced as a young man was not the same one that attracted people from all over the world with its promise of opportunity. I grew up in public housing, attended low-performing public schools, and my parents received welfare. My worldview was shaped by low-skilled workers from my neighborhood, conversations with my teachers, and thunderous sermons validated by screams of "AMEN" from the pews of black churches. Life wasn't easy growing up in the city, but I have fond memories of the San Francisco that helped mold me into the man I am today.

It wasn't until I began to travel in search of more education and new experiences around the world that I really understood that the city had a global reputation that differed greatly from the experience I had growing up there. Upon returning from my travels, I discovered this more resource rich, incredibly beautiful, fast paced, and big ideas San Francisco that had been moving along without me. I hadn't been introduced to this side of the city, but I wanted to be a part of it and I wanted to play a role in extending the opportunities it can provide to more residents who were interested in taking part.

Even in the epicenter of the innovation economy, the digital divide and a lack of access to computer science courses persists for low-income communities. In San Francisco, low-income communities and seniors have the lowest levels of access to the internet. In our public schools, only 5% of students this year were enrolled in a computer science course.

While these steps taken by the Board of Education are critical to creating access, it is important to recognize that they are taking place in an education system that has consistently failed low-income black and brown students and their families.

With these concerns in mind, I joined Mission Bit as CEO a few months ago. Mission Bit is an organization committed to closing the technology divide through providing computer science courses and job training skills to all youth and young adults who want access to careers in the tech industry. We place a special emphasis on women, students of color and youth from low-income communities. Most organizations focus on short-term or one-off hackathons and exposure activities.

We offer semester-long project-based courses in java, python, android mobile game development and ruby. This allows Mission Bit to provide students with a multi-year course pathway that offer students the hard skills that align with what industry professionals are using. As a result of participating in our program, youth get hired as interns at tech companies, build products they can sale online and use technology to solve the biggest issues in their communicates.

At Mission Bit, we focus on giving youth and young adults the tools to build through technology. We leverage the resources and expertise of San Francisco's tech industry to provide courses that are developed by professional software engineers and taught by industry professionals and college computer science majors. Recently, we teamed up with co-founder of Instagram Mike Krieger to throw a fundraiser and expand out reach.

This summer, I am leading a group of leaders in various industries to introduce coding courses at public housing sites in San Francisco and developing countries like Northern Uganda and Southern Nicaragua. My team is using the principles of human centered design to create a learning experience that will dramatically expand computer science education and disrupt generational poverty.

We have the leadership, partnerships, and relationships to create serious inroads in low-income communities across the Bay Area. We won't rest until we've created jobs for thousands of people. Deeper than that, we have a commitment to the people of low-income communities, like the one I was raised in and other similar communities around the world. We are using Mission Bit to create a place for dreamers and the ambitious, a place where their ideas are tested and brought to fruition.