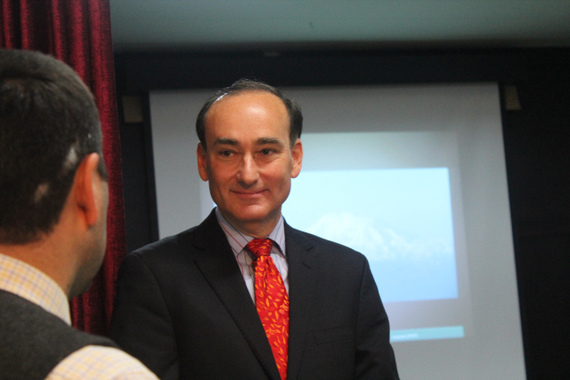 The week before last I was in Manhattan and emerged alone on a Friday night from the subway station in Union Square. It was a little before eight. Instantly three young men surrounded me in desperate need of help: They said they had left their phones on the train in from New Jersey and were lost without their map app. They were trying to find a small venue nearby where they had tickets for a concert, but couldn't find Irving Place. I pointed out to them that the address was on the other side of the park. (I didn't inquire how all three of them had managed to lose their phones, because I was a teenager once. At that age, I could have lost a moose in a petting zoo.)

Then a German couple asked me how to get to Herald Square from where we were standing. I told them.

Finally, four-fifths of a family of five was in the city for their son's college graduation, and were meeting him at the Strand Bookstore. I pointed them toward Broadway.

This all happened in well under 90 seconds. Why was I the go-to guy in that corner of Union Square? Because I was wearing a crisp black suit and I was alone. In other words, I looked competent and they would be troubling only a single individual.

On the other hand, when I'm home in Vermont, I often look like the person you cross the street to avoid. I am rarely dressed up. I might start work at 6 in the morning, but I don't climb out of the pajama bottoms and hoodie in which I write until close to noon. Some days, I don't bother to shave. My hair looks like Christopher Lloyd's in Back to the Future. And in the afternoons, I am wearing ripped jeans or bike shorts most of the time. Yup, my wife is one lucky lady.

When I travel for work, however, I'm a pretty smart dresser. Part of the reason I always wear a suit and tie when I speak is out of deference to my audience and readers. If someone is going to give me some of their time, either by reading my work or listening to me speak, then I am going to show them some respect in return by dressing up.

There is actually a term for this: "enclothed cognition," or the influence that clothing has on how we think about ourselves. In other words, the black suit didn't just make me look competent to others because it was well tailored. It may have led me to conduct myself a little differently and project a more confident vibe.

Years ago, when I was working for an ad agency in Burlington, we brought in a consultant to help us with new business. He was a big guy with a big presence who encouraged us always to dress "one click above" anyone we were approaching. (Just for the record, we were never to dress "two clicks above," because then we would look like overdressed morons.) He was, I have come to realize, a pretty astute psychologist. He wanted us to grow into the persona of our clothing.

So, does this mean that I should start dressing up to write in the morning? Maybe. But it's not happening, and there are at least two reasons why:

In any case, the next time you see me around the 802 in bike shorts, tattered jeans, or a hoodie with coffee stains, feel free to ask me directions. I may not be as competent as that guy in the black suit, but chances are I can still point you in the right direction.

(This column appeared originally in the Burlington Free Press on May 31, 2015. The paperback of Chris's most recent novel, "Close Your Eyes, Hold Hands," went on sale the last week in May.)