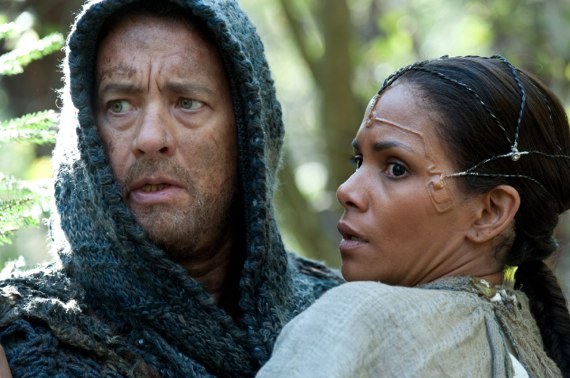 This weekend, a nearly three-hour long movie called Cloud Atlas will open in theaters. Cloud Atlas is based on a book (that takes more than three hours to read) also titled Cloud Atlas. The film version stars a plethora of actors that you've heard of -- Tom Hanks (The Man With One Red Shoe), Halle Berry (Boomerang) and Hugh Grant (Mickey Blue Eyes) -- but, does that ensure your enjoyment of Cloud Atlas? As a service, we answer every question that you could possibly have about Cloud Atlas.

A: I have not read the book, yet I was never particularly more confused than I am during any other movie. (Full disclosure: I'm easily confused.)

A: You're thinking of Atlas Shrugged (and, unrelated, Boiler Room).

A: Yes, it does. Maybe a little longer.

Q: Does this mean that Cloud Atlas is boring?

A: No. Though, it is dense. I mean, there's a lot going on in this movie. It's actually one of the most remarkable films that I've ever seen. But just because something is remarkable doesn't necessarily mean that it's also an enjoyable experience.

Q: What are the chances that someone at Warner Bros. is thinking about using, "One of the most remarkable films that I've ever seen," as a pull quote?

Q: Can you make a bad analogy that not at all relates to what we're discussing to explain what you mean by that?

A: Sure. A black hole is certainly remarkable. But the process of being spaghettified by that black hole once crossing over the event horizon is not an enjoyable experience. (I assume.)

Q: What is Cloud Atlas about?

Q: Are you not going to explain the plot of Cloud Atlas?

Q: OK, can you at lest summarize the plot of Cloud Atlas in less than 100 words?

A: Oh, good grief, fine. There are six stories that are all loosely related: A post-apocalyptic journey to a mountaintop; a late '70s journalistic investigation of a corrupt nuclear power plant; the process of composing the perfect piece of music; the freeing of a slave; an escape from a retirement home; and a futuristic clone's fight for freedom.

Q: Well, who does Tom Hanks portray in Cloud Atlas?

A: It might be easier to explain who he doesn't portray. The actors in Cloud Atlas portray multiple roles.

Q: Was a good amount of your time watching Cloud Atlas spent thinking to yourself, Wait, who is THAT?

A: It's almost impossible not to play the "which famous actor is in the crazy makeup" game while watching Cloud Atlas.

Q: What did you assume that you would never see, yet you saw it in Cloud Atlas?

A: Hugh Grant wearing war paint on his face.

A: Jim Broadbent's escape attempt from a retirement home.

A: An annoying creature of some sort that haunts Tom Hanks throughout the film.

A: No. Hooch was a nuisance, but not particularly annoying. Hugo Weaving portrays a goblin, or something, that constantly taunts Hanks' post-apocalyptic character.

Q: How long have you been dreading the thought of writing about Cloud Atlas?

A: For almost seven weeks.

Q: On a scale of one to ten, how ashamed are you of making a Turner & Hooch reference?

Q: For no reason in particular, will you embed a video of Tom Hanks rapping and dancing to the theme song for Dragnet?

Q: Do any of the stories in Cloud Atlas feature Pep Streebeck?

A: For better or for worse, no.

Q: What's the biggest difference between the book and film versions of Cloud Atlas?

A: From what I understand, the book spends more time with each story. In that it there are shifts between stories, but a lot less of them. The movie shifts back and forth between stories at almost a breakneck pace.

Q: Is it possible to break your neck from just watching a movie?

A: With the constant shifting between stories, it never stayed on one long enough for me to connect with any particular character. Or, if I felt that I was starting to connect, the film would shift to a story that was not as appealing.

Q: Did you want to like Cloud Atlas more than you did?

A: First, I think I want to like everything more than I do. I feel like this should be a goal in life -- more enjoyment. And, yes, I really wanted to like Cloud Atlas. It's so obvious that Andy Wachowski, Lana Wachowski and Tom Tykwer put their hearts and souls into this movie. And, as mentioned, it's a remarkable piece of filmmaking -- just not particularly enjoyable.

A: In the respects of, "You will probably never see anything quite like this again," yes. But, just know there's a chance of spaghettification.