Vaping has apparently become a sport.

With e-cigarettes gaining popularity and dedicated vape shops popping up in cities all across the country, perhaps it won’t come a shock that there are so-called “professional vapers” out there who compete against one another to blow the biggest, baddest clouds of smoke. The activity is known in the vape world as "cloud chasing."

In the video above, posted online by Mashable last week, watch as vapers compete in what’s known as a “cloud competition” in the Henley Vaporium in New York City.

During the event, dubbed the "X-Games of vaping” by an attendee, contestants took turns exhaling clouds of epic proportions. To win the competition, a vaper had to create the biggest and densest cloud.

According to Mashable, the professional vapers at the event weren’t smoking e-cigarettes, per se. Instead they used modified devices to burn vegetable glycerol and liquid nicotine. (In April, a manager of a vape shop in Arizona told the Arizona Republic that some "cloud chasers" don't even use nicotine.) 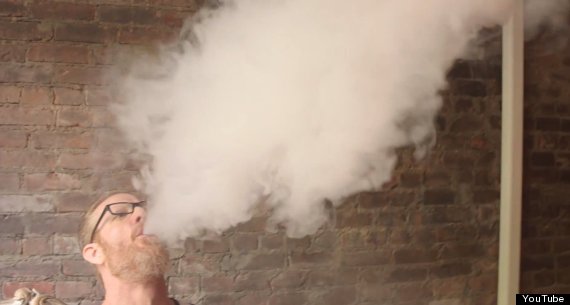 Competitive vaping is actually not a totally new phenomenon.

The “sport” apparently started as a West Coast trend, but cloud competitions have popped up in recent months in New Jersey, Illinois and New Mexico. Earlier this year, an International Cloud Championship was held in California; and in March, vapers competed against one another at Vape Blast 2014, described as "the first Texas vape convention."

Some people have given the sport a thumbs-up. “It's kind of impressive,” wrote Digg.com.

But others have pointed out potential hazards associated with the activity: The jury is still out on whether or not e-cigarettes are safe; and vaping enthusiasts on Reddit, vaping forums and blogs have pointed out the danger of meddling with a vaping device to produce more smoke.

In short: We wouldn't recommend trying this at home.

Instead, watch the vaping masters in action in the video above.