PALO ALTO, Calif. -- In a throwback to the Cold War and Sean Connery-era James Bond films, the New York Times reported this week that there is mounting concern amongst U.S. military and intelligence officials that Russian submarines and spy ships are operating near critical undersea cable infrastructure. These officials are concerned that Russia could tap into these undersea cable lines, or worse, sabotage them.

For those of us who rely on cloud services like Dropbox or Gmail, it may not be very concerning if Russia submarines are spotted off the coast of Cuba or halfway across the globe. What does it matter if a few physical cables get cut? After all, the benefit of "the cloud" is that it's removed from the limitations of physical equipment. Gone are the days when spilling coffee on your laptop meant all files were lost. Through the cloud, you can access your files and messages from your phone or any other Internet connected device while mopping up your coffee-drenched laptop. But although the cloud allows users to rid themselves of physical storage devices and other equipment, the cloud itself is wholly dependent on a highly vulnerable physical network of almost 300 cables that crisscross the ocean floor. An attack on these critical undersea cables could have disastrous effects on our increasingly cloud-based economy. In short, without physical undersea cables, the cloud as we know it could not function.

Although the cloud allows users to rid themselves of physical storage devices and other equipment, the cloud itself is wholly dependent on a highly vulnerable physical network of almost 300 cables that crisscross the ocean floor.

It is easy to be fooled by the word "cloud." When you store a photo to a cloud storage service like Google Drive, for example, the idea of the "cloud" suggests that your photo floats up into the ether and lives alongside all your other files (in said cloud) until you call it back down again. In reality, when you store a file to the cloud, you are storing it on a physical server, often far from you, perhaps even in a different country. You might think your files are transported to that foreign server over the air via satellite -- literally in the "clouds." But there is really very little that's cloud-like about cloud computing. It is estimated that satellites only have the capacity to carry around 7 percent of the total Internet traffic to and from the U.S.. Instead, your files are most likely carried via undersea cables to those physical servers across the globe. In fact, the undersea cable network carries 95 percent of daily communications.

What does this physical network of cables look like? Today, there are close to 300 fiber optic cables, totaling over 600,000 miles that run along the ocean floor. The longest undersea cable spans over 8,000 miles, and connects 32 different countries. These cables are owned by traditional telecom companies such as Verizon and AT&T, and more recently Internet companies such as Google and Facebook, whom it should be noted, rely very heavily on the cloud. 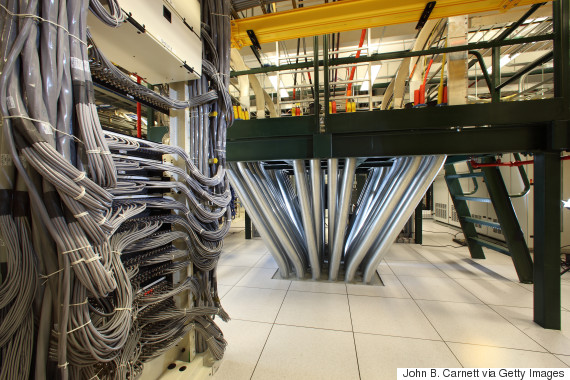 With so many miles of cables, why is the U.S. concerned about the potential threat posed by a few Russian submarines? In reality, the technology required to disrupt an undersea cable need not be nearly as sophisticated as a Russian deep sea submersible. Each cable only has a diameter the size of a garden hose. While often armored with a steel sheath or laid in depths exceeding 1,500 meters, there are still an average of 200 cable faults worldwide each year, mostly accidental faults caused simply by anchors and fishing equipment. If a fault can be so easily caused by a ship's errant anchor, one can only imagine how much damage a calculated attack by a weaponized submarine could do. And it is not as if any party looking to disrupt cables would have trouble finding them. The location of most cables along the ocean floor is made readily available to mariners, commercial bottom fisherman and undersea seabed developers so that they do not accidentally damage them. In short, these vital cables are both easy to find and easy to break.

Granted, the effects of a single cut to a single undersea cable may not be felt by users in places like the United States, which is connected to the outside world by networks relying on numerous cables that are able to compensate for each other when one goes down. However, as more cables are cut, the amount of data traffic that is lost increases exponentially. Take, for example, the undersea cable lines connecting Europe and India. While the disruption of one or two cables would not have a large effect on India's Internet resiliency, nearly 70 percent of traffic to and from India would be lost with just three concurrent cable disruptions. A disruption in Asia provides an unsettling case study: in 2006, an earthquake along the coast of Taiwan triggered undersea landslides and broke nine undersea cables. Internet telecommunications in Southeast Asia were so seriously impaired that trading of the Korean won was temporarily stopped.

The technology required to disrupt an undersea cable need not be nearly as sophisticated as a Russian deep sea submersible. Each cable only has a diameter the size of a garden hose.

To put all this in perspective, it is important to realize how much we rely on the cloud, and consequently on the undersea cable infrastructure the provides us access to it. Over one exabyte of data, or one billion gigabytes, is currently stored in the cloud. In 2013, Amazon announced that its S3 cloud storage service, which provides the cloud storage space for companies like Dropbox, was storing more than 2 trillion objects. As Amazon itself pointed out, the Milky Way is estimated to contain up to roughly 400 billion stars. In other words, Amazon stores five data objects for every star in the galaxy. It is estimated that by 2016, users will store more than one-third of their digital content in the cloud and by 2018, "more than 60 percent of enterprises will have at least half of their infrastructure on cloud-based platforms." With such reliance on the cloud, reliable access to it is critical. And at least for the near future -- until Facebook rolls out its Internet-via-drones-and-lasers plan on a wide basis -- that access depends on undersea cables. So those Russian submarines? Might be time to call James Bond.