STATEN ISLAND — A mysterious clown has been roaming the streets of Staten Island and freaking out local residents.

Staten Islanders have been posting pictures and videos on social media of a person dressed up like a clown wearing a yellow outfit, red shoes and a mask while holding balloons and waving to the cameras, the Staten Island Advance reported.

The clown has been spotted at night near the Richmond Valley and Grasmere train stations and in front of a Chinese restaurant during the day on Richmond Avenue, according to the Advance and online posts.

"I wish I was joking dude, it scared the heck out of me," Michael Levy posted on his Instagram photo of the clown behind a tree at night. "I thought it was like some dummy or cardboard standup thing at first until he pointed at me."

Others were just as terrified.

"I just got freaked out coming home from the studio in Tottenville," musician Vin Innocente posted on Instagram, with a picture of the clown waving in front of a detour sign.

Even Staten Island Borough President James Oddo got in on the action by clowning around on Twitter.

"I reference Krusty the Clown in a tweet last week & now all hell is breaking lose," he wrote. "And they say BPs have no power."

Staten Island isn't the first place to have a mysterious clown roaming the streets. Last year, a clown dressed like Pennywise from the Stephen King book and film "It" was spotted in the small British town of Northampton. He was later identified as a 22-year-old college student and filmmaker.

The earliest online sighting dates back to earlier this month. And even though there's only been a handful of sightings, the clown has some scared for their life.

"This Staten Island clown guy roaming around... has me locked in my house with all my sharp objects near me JUST IN CASE," @moeownzyourface posted on Twitter. 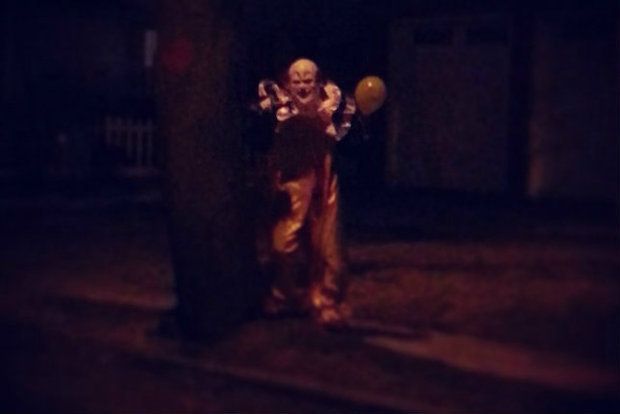