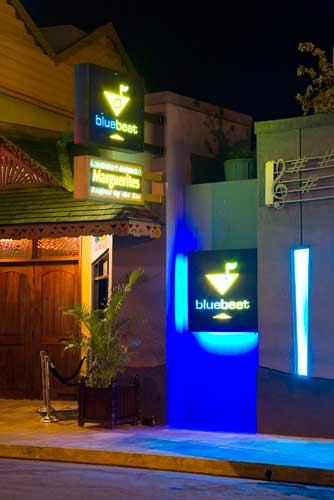 It was 11PM, well after my bedtime, as the bus pulled to a stop along the "hip strip" in Montego Bay, Jamaica. To some, Friday night had just begun. I, on the other hand, forced myself to stay awake just to get inside the club.

When I travel, I like to push the envelope. I like making my vacation memorable by doing something different. Maybe I pushed too far: I am 20 years removed from my last club visit, in my mid-40s and have a complete lack of hipness (who says black socks are not happening beach attire?).

Standing in front of the doors of Blue Beat, the thought of going "clubbing" intimidated me. The thought of going clubbing in Jamaica, surrounded by the folks who invented cool and laid back, made me rethink wanting something memorable. I imagined walking into a thriving party and hearing the record needle abruptly scratch across the LP (LPs? I told you I was old) into complete silence. All eyes are on me. Then someone in the crowd yells, "Who let in the Methuselah wearing sandals and black socks?" Still, I took a deep breath and pushed passed the doorman, velvet ropes and my fear of the unknown, and made my way inside.

The music in the darkened club continued to play and I managed not to destroy the vibe. Blue Beat is known more for jazz, blues and martinis, making it a nice starting point for us 40-somethings. However, on this night, I found more DJ and salsa beats filling the room. The crowd was a comfortable mix of young and old, local and tourist, and beige and brown people standing near an outdoor dance floor that extended over the Caribbean Sea. I fought the infectious rhythms of the club by ignoring my toe wanting to tap. After all, I wanted to look cool. 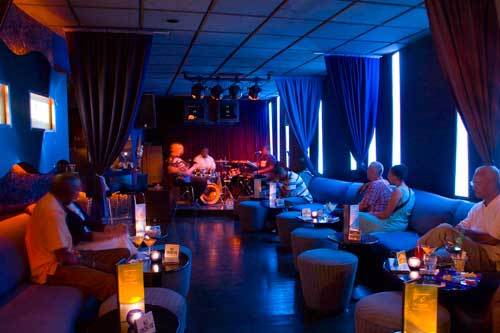 An hour later, next door to Blue Beat, I arrived at Jimmy Buffet's Margaritaville, which has absolutely nothing in common with the sleepy, 1970s tune. This place has a large, square bar, cold and colorful slushy drinks, a hip-hop theme and a younger clientele. I think Blue Beat loosened me up enough to at least relax. The floor was packed and the dancing, which leaned toward nuanced and decidedly hip (versus my flailing), was enthusiastic. Before I knew it, I was dragged onto the floor by a happy local, and I had to do something. So I danced. Not with wild abandon or with the intention of later picking a honey (uncool and outdated noun for attractive female), but I danced, fit in well enough and had fun.

By the time I arrived at Pier 1, it was late. The place was mobbed. The music pulsed. The beer flowed. People spilled out on to the pier from the back of the club toward a calm sea for fresh air and a quieter experience. Pier 1 is where the locals come to party. I enjoyed seeing the people, culture and a bit of unrestrained behavior. There were also tourists and a few folks my age running around.

By the time the night was over, I learned exactly how cool the Jamaicans were. They are lively, passionate, welcoming and have great taste in music. They shared their scene with my older, uncool, overdressed self in my quest for something memorable. I got what I wanted.