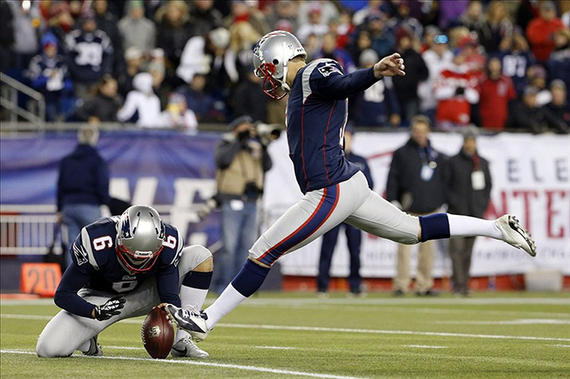 It was a clutch game that the Patriots nearly didn't win. It was also about the team and Tom Brady proving that they could shake off the curse of the Giants once and for all. In the end, it all came down to a last-second clutch field goal kick from 54 yards.

Steve Gostkowski would be the winner in this big match-up, sending a clean kick that arched slightly to the left across 54 yards of space to bring the Patriots out on top at 27-26 over the Giants with one second remaining in regulation. The look on Tom Brady's face spelled it out nicely: Payback sucks for the loser but feels really good for the giver.

On course to match their 2007 perfect season, the Pats now stand at 9-0. But they almost didn't. Julian Edelman was out early in the game due to a broken foot (and likely will be sidelined the remainder of the season). While this last-minute victory certainly felt great, it still doesn't staunch the bleeding of losing two Super Bowl titles to the Giants over the past decade. But it does retain their current perfect record.

"It was a fun game. Obviously those guys have had our number," kicker Steve Gostkowski said. "Any time you can beat a good team on the road and have the fans go home quiet, it's a blast. You're one kick away from being public enemy number one," he said. "You're one play away from trending on Twitter as the number one loser in America."

Early in the game, the Giants looked on course to set the Pats back once again, taking an early 10-point lead. This would last until about the middle of the third quarter, when Brady and company decided to fight back with all their might and not a lot of time on their side.

"That was quite a game. So many elements to it, back and forth, the offense and defense, special teams, turnovers, big plays, penalties," said head coach Bill Belichick.

"In the end our guys made the plays they need to make. A big stop down there on the goal line. Barely had enough time to get into field goal range and Steve made a great kick. That's the way these games are. Can't worry about what happened in the first 58 minutes, 59 minutes. The game comes down to a certain point and it's how the two teams play from there on in, whether it's the last minute, the last 30 seconds."

While the Patriots certainly squeaked out a close one out this time, we'll see how Brady fares without two of his top targets coming down the final stretch of the regular season. Knowing Belichick's prowess for turning bench-warmers into superstars, expect to see a few new names turning heads with the stats in the weeks to come.

Up next, the Patriots play a Monday night game against Buffalo on their home turf. If it's reminiscent of the last time these two teams met up, back in week two, when Tom Brady put of 466 yards and three touchdowns with no interceptions. Seeing them play the rematch at home instead of away this time around is assuring that we'll also get to see the Pats come away from the MNF match-up at 10-0 exactly a week from now.