CHICAGO -- On Tuesday morning, a group of about 50 protesters gathered at the Board of Trade -- home of the CME Group -- to deliver a "golden toilet" to the biggest operator of U.S. futures exchanges.

The toilet was meant to represent a reported $15 million deal approved in 2010 by the Chicago City Council, which would give CME money for Board of Trade renovations if the corporation agreed to create a few hundred jobs and keep its headquarters in the city until 2017. The money would come from the city's controversial tax increment financing, or
TIF program, a fund made up of property tax revenues intended to stimulate the city economy and create jobs.

"CME was awarded a $15 million TIF to renovate their bathrooms, build a fancy employee cafeteria, a fitness center for employees and a high-end audiovisual digital conference room," Catherine Murrell, communications coordinator for Stand Up Chicago, told The Huffington Post Monday. Murrell's group, along with Arise Chicago, organized the Tuesday protest, where dozens of activists gathered to criticize the deal.

Though the City Council did approve the funds for renovations, the money was never given to CME, according to Tom Alexander, assistant press secretary at Mayor Rahm Emanuel's office.

"It was approved but they never signed the deal," Alexander said. "There is no active TIF deal in place." Activists, however, feel that the funds should not have been approved in the first place.

"The best way to use [TIF] money would be for things our community needs, like parks and schools," said Maria Hueramo of the Brighton Park Neighborhood Council, which last week was denied TIF funds to improve Albany Park. "We also need services for senior citizens, for people who don't have a lot of income to help them with their nutrition."

Hueramo, who attended Tuesday's protest, said she believes it is an "injustice" for a company like CME to receive any taxpayer money when schools, parks and social services are struggling with funding.

CME, as well as other large Illinois companies, has become used to the presence of protesters. Occupy Chicago has railed against massive tax breaks that the state approved in order to keep CME, Sears and Chicago Board Options Exchange in Illinois.

"It's getting old," Nick Allen, who works in the CME building and was watching the demonstration, said of the Tuesday protest. "I don't think it's proving a point."

THE IDEA BEHIND TIFS

Alexander said the primary goal for the city's tax increment financing or TIF districts is to create jobs and stimulate the city's economy, and Mayor Emanuel has echoed that sentiment publicly. When announcing a TIF deal with Sara Lee in December, Emanuel said he was "so proud" that the company was moving "home" to Chicago after being based in the suburbs.

The deal will give Sara Lee $5 million to $6.5 million in tax incremental financing money -- after it proves to the city that it will bring at least 500 jobs to Chicago and move to the Southwest Loop, which was described by Crain's Chicago Business as a "sleepy and largely vacant warehouse district" that could benefit from the business.

For years, former Mayor Richard M. Daley was criticized for approving TIF projects downtown, allegedly diverting the funds from blighted areas where aid was more needed. When Emanuel took office and created a TIF panel to recommend changes to the controversial program, he said he would avoid approving downtown TIFs. But, the mayor said, job creation was the ultimate goal.

The mayor's office would not comment on the merits of the $15 million CME deal approved by the City Council for Board of Trade renovations, saying only that the deal is "not active."

"The Mayor has recommitted the City to using TIF for the purposes of job creation and economic development, and all TIF deals are being evaluated with these objectives in mind, first and foremost," Alexander stated via an email.

Alexander also explained that for any company or project to receive the funds, it must follow through on the commitments that are part of that deal. In this case, CME was set to get $15 million over 10 years if it retained 1,750 positions and created 638 jobs in Chicago, as the Chicago Tribune reported:

The company said it needed the funds to fend off its main competitor when it bid for the Chicago Board of Trade. The funds also persuaded the firm to stay in Chicago after it acquired NYMEX Holdings Inc. in 2008 instead of moving to that exchange's offices in New York.

When asked about the fact that CME had not accepted the TIF money for the Board of Trade renovations, Stand Up Chicago policy analyst Elizabeth Parisian said it should return the $77 million-per-year tax break from the state of Illinois as well. CME's Grams said the tax deal allowed his company to be on "equal footing" with other Illinois firms and global exchanges and ensured that Chicago will remain the "risk management capital of the world."

Parisian said that while in some cases TIFs may create jobs, CME has not done much of that in Chicago or elsewhere.

"Let's talk about CME and jobs," Parisian said. "This company takes home $1 billion per year, and they have 2,500 employees worldwide. That's about how many people went to my high school ... The idea that CME is a job creator, that's a huge stretch."

For years, media coverage of the city's TIF program has been scarce, aside from some in-depth reporting from the Chicago Reader's Mick Dumke and Ben Jovarsky.

But when the city started to face budgetary challenges over the past two years, including layoffs and cuts to city services, TIFs took center stage.

"At a time when everybody from the police to the schools needs more money, the city is stockpiling hundreds of millions of dollars," Cook County Commissioner John Fritchey told the Chicago News Cooperative over the summer. "It escapes me how city officials can talk about the importance of education while taking money from schools and giving it to car dealers and grocery stores."

Since the City Council approved Mayor Emanuel's budget, residents and community activists have staged protests over everything from cuts to mental health services to Monday library closures -- and many say TIFs can help close budget gaps without cuts to services. But the city says TIFs and the budget are two different things.

"TIF deals are individualized and reflective of the rules governing the TIF program, the specific TIF district, the level of market interest, and numerous other factors," Alexander said in a statement. "Individual TIF deals have nothing to do with the city's 2012 budget." ( The Chicago News Cooperative has reported that TIF money over the years has been pretty evenly distributed between private companies and public works projects. )

Donna Roberts, an Englewood resident who helped deliver the "golden toilet" to CME on Tuesday, said she has watched her neighborhood deteriorate over the years and was outraged that CME could even ask for TIF money.

"We need it in the blighted areas," Roberts said. "The areas that the mayor is talking about -- he wants to see change. Change in Englewood. Change in Lawndale. Those are blighted areas, and that's where the TIF money is supposed to be spent."

Parisian said union members and activists are well aware of what TIFs are, and with record unemployment, foreclosures and poverty, they will make their opinions heard.

"It's time everyone get their priorities in the right place. There are places that need this money much, much more," Parisian said. "Give back all the corporate welfare." 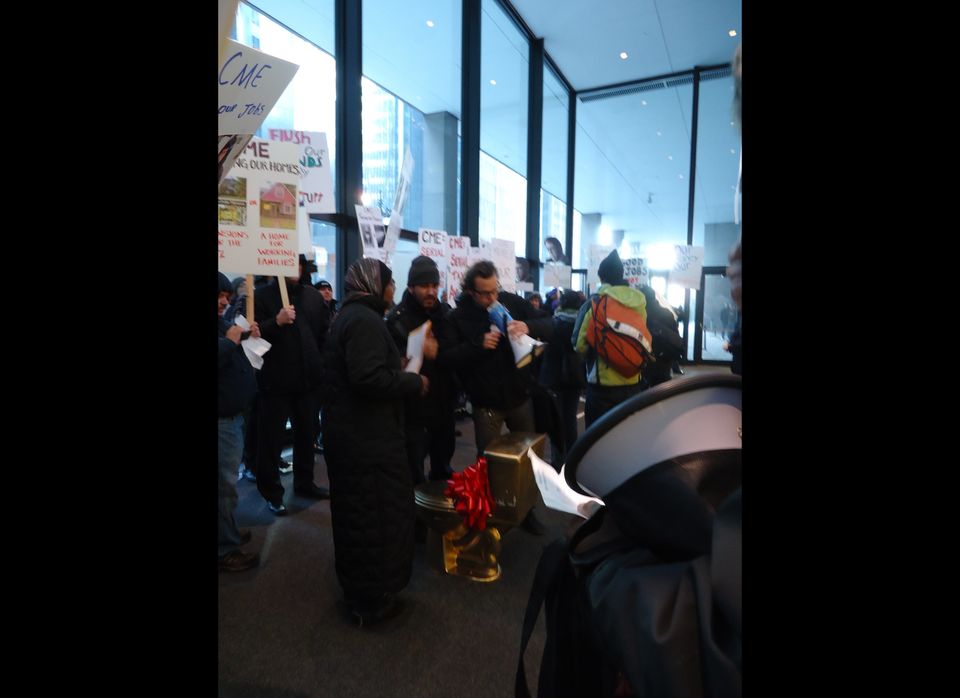