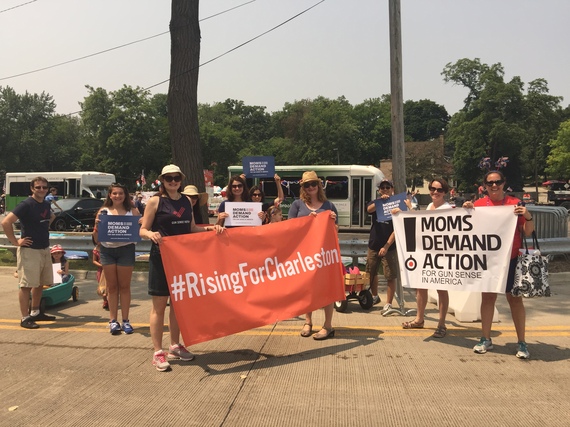 It was the Fourth of July in our little Mayberry town and for the first time in our ten years living here, I marched in the annual parade. I was marching with the group Moms Demand Action For Gun Sense In America. These are not exactly radical ideas I'm marching for--just common sense gun reforms--but I felt self-conscious putting my views out there on display, in public.

I didn't know anyone in the group and none of my children would march with me (if you want to know how much your children love you, make them choose between you and candy. I totally lost. "I want to get the candy from the parade, I don't want to hand it out!").

I called my 85-year old Dad to wish him a Happy 4th of July and told him what I was thinking: how I wanted to march but I didn't know anyone in the group, I'd have to go there by myself...I don't know, it'd just be easier to stay with my husband and kids, right? Maybe I'd do it another year?

"Get out there and do it! You think it's important, don't you? You believe in it? Then go! Maybe you'll meet some new people which is always good." So I jumped up and went. Thanks, Dad! It was the nudge I needed.

I headed up to the parade staging area by myself and found them: a small but mighty group of people in matching "MOMS DEMAND ACTION" shirts. I had seen them marching in last year's parade and was stunned to find that there were activists in my little town, located in a notoriously more conservative county. Though times, they are a-changin'. I had joined their online group and told myself that I'd march with them next year...and here I was. I took a deep breath, walked up and introduced myself.

Everyone was friendly, and we got into position. I carried the banner that said #RisingForCharleston with an awesome, interesting, funny woman that I was happy to meet (Dad, you were so right!). We started marching.

The crowd lining the parade route was amazing: they clapped, cheered, stood up for us when they read our signs and saw us coming. They called out, "Go Moms!" "We're with you!" "Thank you!"

One older gentleman, wearing a veteran's hat and shirt shouted, "I'm in the NRA and I agree with you!" That made us all laugh.

It's been a really tough summer for people of a certain mindset, from the lowering and banning of the Confederate Flag to the SCOTUS and their history making decision regarding marriage equality. I imagine that for this certain group, this must be similar to how the dinosaurs felt when they looked up into the skies and saw the meteors heading right at them: "Uh oh. This can't be good for business." So much change happening so fast. Creatures used to dominating everything around them, now facing their own mortality.

You could see those people along the parade route. They were sitting with long faces, lips pressed together and arms folded across their chest. We smiled and waved anyway. It was only a few feet of awkwardness until someone else stood up and started whooping and hollering.

There was only one negative comment during the parade. Apparently, it was in front of the same house as the only negative comment that was heard in last year's parade, too. One young, backwards-baseball-hat-wearing, tank top-sporting, sunburnt dudebro cupped his hands around his mouth and shouted "BOOOOOOOOO!" at us, as loud as he could.

I was shocked, I admit, but I managed to look upon this manchild with kindness, as an angel might gaze down upon a sleeping baby, offering nothing but love and compassion, straight from my heart.

Nah. I totally blurted something really stupid back at him. Apparently, I have no self-control when being booed--who knew?

As soon as the words (not swear words, at least, there is that) were out of my mouth, I was shocked and ashamed of myself. I confessed to my husband after the parade and he was shocked, too, but for a different reason: "Wow. Usually, you're so quick-witted and fast with awesome comebacks, but that was just...bad, like not even funny or clever." I KNOW.

Now, let's talk about why don't we have more Moms marching and why I was so hesitant and even a little uncomfortable getting out there and joining in the march.
The only reason I can think of is-- we Moms are being too polite.

"Never discuss politics and religion" is what we've always heard. At some point, however, we really need to discuss delicate subject matters openly in our polite society.

Like, for example, when someone open fires on a classroom full of children.

Or, say, when someone walks into a church and shoots the entire Bible Study Group dead.

So, ladies...Moms...we need to talk. We need to talk about the impolite topics of gun legislation and gun violence; about politics and policies; about racism and bigotry. The most interesting people I know are those I can have a real conversation with. The ones who are up on their current events. Who have an opinion and aren't embarrassed or afraid to share it. People who have a voice. We need to find our voice.

We need to find the courage to walk up to people, introduce ourselves and put our faces and our names to whatever cause we believe in. You get to choose your cause, but you have to choose something.

Towards the end of the parade, another person stepped in front of our #RisingForCharleston banner with a very different message: she asked if we would stand still so she could take our picture. When she was done, she told us that she was from Charleston. Her sister was friends with one of the victims in the church shooting. She thanked our group for our support and told us she was going to send the picture out to everyone back home.

This issue impacts everyone in our country. This problem can be solved with sensible legislation. There need to be more Moms marching and demanding; we all have a horse in this race. The days of sitting quietly and politely smiling in the face of unpleasantness are over: we are smarter than that, more interesting than that and braver than that.

More:
Gun SenseCelebrity MomsMomscharleston shootingGun Control
Newsletter Sign Up
Raise the kind of person you'd like to know
Subscribe to our parenting newsletter.
Successfully Subscribed!
Realness delivered to your inbox