Nobody can be 100 percent sure about who's going to win on Election Night on Tuesday, but people predicting some new digital geegaws from CNN would probably win any bets they made. The network is as famous for its random CGI tricks as it is for Wolf Blitzer's beard. Remember the Iowa caucus "weebles"? The Jessica Yellin hologram?

The network hasn't unveiled all of the gadgetry it has planned for the big night. Presumably it's saving any of the robots or 3D bouncing ballot boxes for showtime. But on Sunday, viewers did get a slight taste of things to come.

Lately, correspondent Tom Foreman has been acting as the Q to the Bonds of the network. Placed in vast expanses of the CNN "virtual studio," Foreman is tasked with navigating whatever new thing the computer types have come up with, such as the "virtual convention center" in March.

On Sunday, Foreman previewed the "Virtual Senate" he'll be handling on Tuesday night. It was, indeed, a computer model of the Senate chamber -- except that graphics of political issues popped down from desks when Foreman touched them.

On "State of the Union," he also unveiled a slightly bewildering graphic which he said showed "all these different ways in which the battleground states can come together to produce an electoral tie." 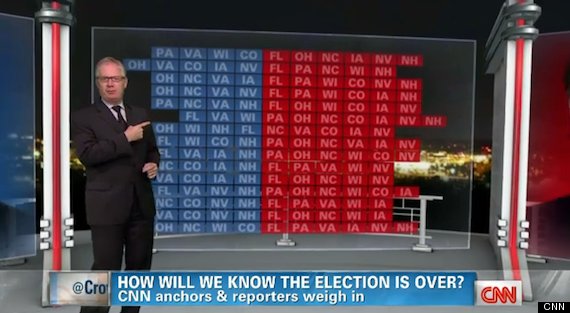 All that was missing was a skeptical Anderson Cooper. If we know our CNN, he's bound to turn up too.