NEW YORK, March 25 (Reuters) - Two CNN journalists were arrested for trying to sneak past security at the World Trade Center in New York City on Tuesday in an attempt to report on recent security lapses at the site, police said.

Yon Pomrenze, 35, and Connor Fieldman Boals, 26, first tried to talk their way in through the main gate to the center in lower Manhattan, much of which is still a construction site, according to the police account. One was holding a video camera, the other had a video camera strapped to his head.

Foiled, Boals then twice tried to climb over the perimeter fence. That did not work either.

A few minutes later, the men were attempting to force their way through an electronic gate about a block away when police arrested them.

The two men, identified as CNN producers, were filming a report on recent security breaches at the World Trade Center, a spokeswoman for the news network said.

The Port Authority has spent millions of dollars on security measures for the World Trade Center, which is due to open later this year on the site of the Twin Towers that were destroyed by Al Qaeda hijackers on Sept. 11, 2001.

Four men were arrested on Monday for organizing a late-night parachute jump from the top of One World Trade Center, the tallest structure in the United States, after sneaking through a hole in a fence in September.

And a 16-year-boy with a camera was arrested a few days earlier after evading capture by security staff at night and getting to the skyscraper's 104th floor.

On Tuesday afternoon, the two CNN producers had said to the officer at the main gate that if a 16-year-old was able to get in, then so should they, said Joseph Pentangelo, a spokesman for the Port Authority Police Department.

"He had enough sense to try it at 4 o'clock in the morning," he said of the 16-year-old. The CNN producers commenced their less successful attempt shortly after lunchtime on Tuesday.

"This is very wasteful of valuable law-enforcement time and energy," Pentagelo said.

The men were arrested on charges of criminal trespass, obstruction of governmental administration and disorderly conduct, police said.

Barbara Levin, a CNN spokeswoman, said in an email the two producers were on assignment but "were not asked to sneak onto the WTC site."

"They were in the surrounding area to do a story about the recent incidents at the WTC and other sites," she wrote, "and the notion that daredevils are being drawn to them."

It was not immediately clear if the men had lawyers on Tuesday. (Reporting By Jonathan Allen; editing by Andrew Hay)

PHOTO GALLERY
View From Atop One World Trade Center Observatory 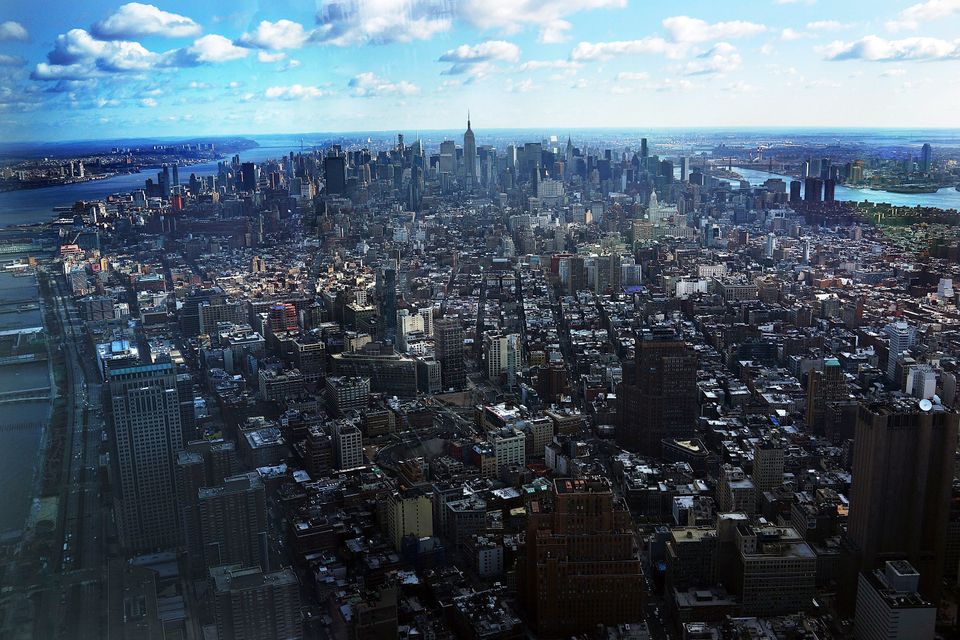 1 / 29
Port Authority Offers Media Tour Of One World Trade Observatory On 100th Floor
NEW YORK, NY - APRIL 02: Manhattan is seen from One World Observatory from the 100th floor of One World Trade Center at the Ground Zero site on April 2, 2013 in New York City. One World Observatory, which is situated more than 1,250 feet over lower Manhattan, will open to the public in 2015 and will include a pre-show theater, multiple spaces that allow for panoramas of the New York City region and numerous dining options. When completed, One World Trade Center will be the tallest building in the Western Hemisphere at 1776 feet. (Photo by Spencer Platt/Getty Images)
Getty Images