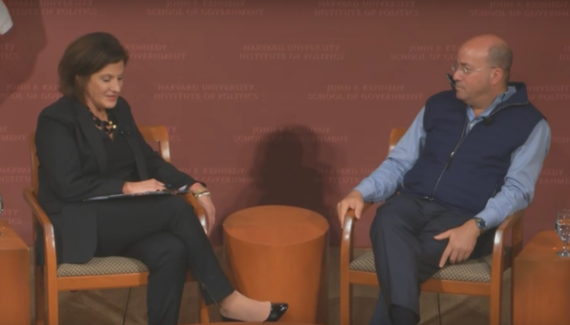 On Friday, October 14th, CNN President Jeff Zucker visited the John F. Kennedy Forum at Harvard's Institute of Politics to share his thoughts about the current election and the state of the media. Interviewed by the masterful Lois Romano, a longtime political correspondent for The Washington Post, Zucker provided insight into whether he thought CNN was responsible for Donald Trump's success.

Recently, pundits and journalists have written about the role media may have played in Trump's rise. Some critics argue that as of March 2015, Trump had received over two billion dollars in free advertising through news networks' extensive coverage of his rallies and frequent interviews. Washington Post media columnist Margaret Sullivan recently called out Zucker in particular for his "singular role in promoting Donald Trump's rise." Zucker forcefully rejects the assertion that he and CNN are responsible for Trump. He made his case in the hour-long Forum.

While the extent to which CNN played a role in Trump's rise is unclear, it is clear that "the media" has been a subject of criticism from all sides this season. There are many, like Sullivan, who blame the media for Trump's rise but also many who claim that the media is unfairly biased in support of Hillary Clinton. To get an idea of the barrage of criticism Zucker faces, I searched his name on Twitter and unsurprisingly found tweets attacking him for everything from his employment of former Trump campaign manager Corey Lewandowski to allegations that CNN actually stands for Clinton News Network. I wanted to get an idea of what we, as college students, could learn about leadership from Zucker's experience.

Before he took to the stage, I had the opportunity to sit down with Zucker and talk about criticism and leadership. To my surprise, he does not see the criticism as an exclusively bad thing.

In other words, he appreciates the many sided criticism because it affirms that he is not acting unfairly to one side.

Even so, I wondered how it is possible to take so much criticism and still be able to go about one's daily life. I know that if I was in a similar position I would be second-guessing myself left and right. What advice did Zucker have for me and future leaders who might be in similar positions?

2. Have some thick skin.
"Have the courage of your convictions to not be swayed by attacks, especially in a social media world where everyone is attacking."

3. Acknowledge your mistakes.
"If you make a mistake don't be afraid to own up to it. I think it's a sign of leadership to admit mistakes."

If there is one thing his critics can agree on, it is that Zucker faces criticism constantly. Given this position, Zucker is uniquely suited to advise those who may follow in his footsteps.

I would like to thank Jeff Zucker, CNN, and the JFK Jr. Forum at the Institute of Politics for giving me this opportunity and encourage you to watch Jeff Zucker's Forum with Lois Romano.

Teddy Landis is a freshman at Harvard College and plans on concentrating in Sociology. In addition to being a member of the JFK Jr. Forum Committee, Teddy works with the Harvard Public Opinion Project at the Institute of Politics.