You know, back when we put up this video of the media inviting a bunch of weird old white dudes on to debate the merits of celebrating Confederate history -- most of which boiled down to one side complaining that Virginia Governor Bob McDonnell glossed over slavery and the other side saying, "Slavery? Was that important to the Civil War? Could you refresh my memory?" -- we sort of thought it would enable the media to see that some "debates" are, in fact, "televised swamps of toxic stupidity."

But over at Gawker, Alex Pareene nabs a screengrab of CNN's webpage, where they are undaunted in pursuit of a balanced debate on the matter.

By the way, arguing on behalf -- and by "arguing on behalf" I mean "asking a series of escalatingly strange rhetorical questions" -- of Confederate history commemorations is S. Waite Rawls III, the executive director of Richmond, Virginia's Museum of the Confederacy, so it's not like he has any controlling personal financial interest at stake here, at all. 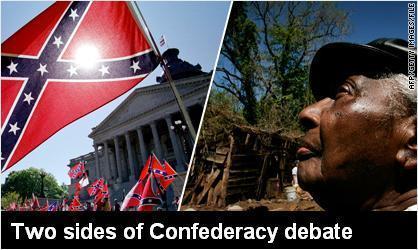 PREVIOUSLY, on the HUFFINGTON POST:
Media Debates The Merits Of Celebrating The Confederacy [VIDEO]