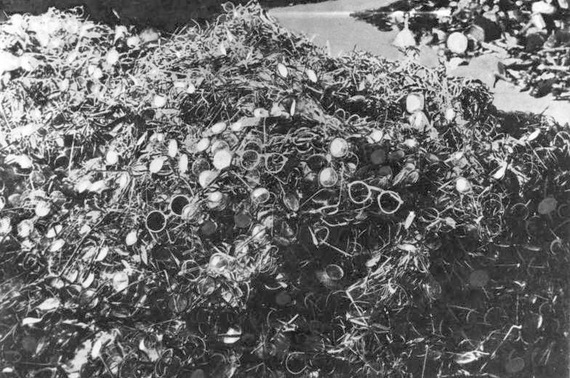 What is the difference between showing films of the allies liberation of concentration camps with their piles of corpses, body parts, teeth, glasses and other artifacts and the decision of Fox News to show a still of the burning Jordanian pilot on TV and the whole video on its website, ("Jordan executes 2 prisoners after ISIS video shows pilot being burned alive,"Fox News, 2/4/15). CNN has taken a holier than thou attitude about the showing of such violent videos, feeling that they are propaganda for ISIS ("Why does CNN refuse to show ISIS video?" CNN, 2/3/15). But propaganda about what? How could the sight of masked ISIS soldiers looking on while their captive is burned alive in a cage be looked at as positive propaganda? Films of animal cruelty have yet to attain such heights of brutality. Granted, in the 19th century hangings were forms of public entertainment. But there are still no shortage of those who deny the reality of the Holocaust and though it's hard to believe, there are going to be apologists for ISIS somewhere who will only be chastened by the reality of horrifying videos that the organization itself produces. For Heidegger one of the means by which a human being can attain an authentic existence is through the awareness of death. The CNN anchor Carol Costello made the point that the network will show a plane crash, but not show pictures of a human being actually dying. Sure, these are tough calls since there are instances where the broadcasting of such images is an invasion of privacy that takes away from a sacrosanct moment in human life. Media outlets like CNN and the Times gain credibility by creating an aura of equanimity that eschews sensationalism. But is there any point in hiding searing images of torture, mass murder and genocide? Are we sparing the victims and the families, or the perpetrators of these atrocities?