CNN made headlines in 2008 by introducing holograms to its election broadcast, and it's upped the virtual ante for the 2010 elections with virtual, graphical, 3-D displays of exit poll data.

As Ali Velshi reports on the data from the CNN set, a Lego-like display of the data appears in front of him. 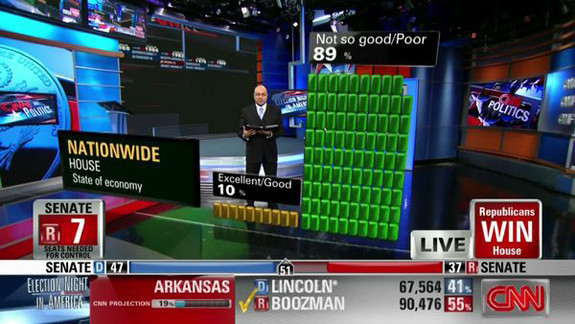 "I see absolutely nothing," Velshi told the Huffington Post Tuesday night. "That's the interesting part. I like it, but it's weird: there's nothing in front of me at all."

Velshi added that he controls what shows up on the TV himself, using his iPad.

"Instead of it being controlled in the control room, I reset the software right from the iPad."

Velshi, who first debuted the technology Sunday night, said it helps him tell a story more in a conversation with the viewers than before.

"It's amazing," he said. "The depiction is between me and the viewer because that's how people talk. To actually have that there is quite a leap in being able to tell the story."

But still, there's the issue that he sees absolutely nothing in front of him.

"I could accidentally walk through something at any point," he said. "I'm digging it, so to me doing that little dance and positioning myself by looking at a monitor is a lot of fun."