The Outdoor Co-Ed Topless Pulp Fiction Appreciation Society started "making reading sexy" in mid-August, venturing to city parks and leafing through fantastical fiction together while exposing their bare breasts in the summer sun.

It's legal for women to go topless in New York City (just don't remove your G-string) and a member of the OCEPFAS tells The Village Voice:

"The overall purpose of the group is for girls who want to take advantage of the legality of being topless in New York to be able to, while reading books. Along with bare-breasted sunbathing being something that we enjoy, we also have noticed that despite female toplessness being legal, there are very few who take advantage of it. We are hoping to go from this being something taboo to something of social inconsequence."

As a genre, the group thought pulp fiction paired well with a "bold, topless outing."

(For those unfamiliar, pulp fiction refers to a large swath of American literature popular in the mid-20th century that was printed on cheap "pulp" paper, and is often considered to be the genesis of the hard-boiled detective and science fiction genres. The covers often depicted scantily clad women in lurid poses.) 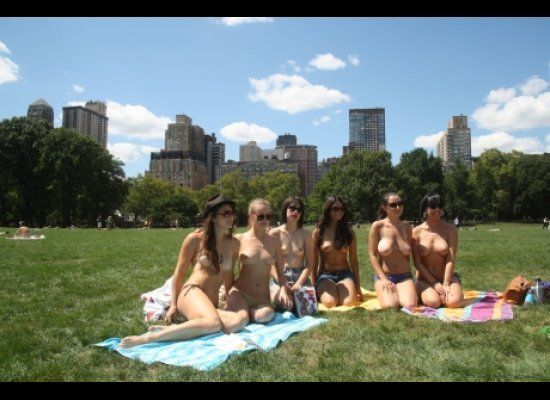