The city of Milwaukee, Wisc., is taking a "raw" approach at warning parents of the dangers of co-sleeping with their babies.

SERVE marketing designed an advertisement for the city's Health Department that features a baby sleeping next to a knife. The text above the photo reads: "Your baby sleeping with you can be just as dangerous," the Milwaukee Journal Sentinel reports.

Bevan Baker, Milwaukee's Commissioner of Health, acknowledged that some might find ads to be a bit extreme.

"Is it shocking? Is it provocative? Yes. But what is even more shocking and provocative is that 30 developed and underdeveloped countries have better [infant death] rates than Milwaukee," he told the Journal Sentinel.

The Milwaukee Health Department hopes the ads will help lower the city's infant mortality rate, which was "10.4 deaths for every 1,000 live births" in 2009, the Journal Sentinel points out.

Co-sleeping is a common practice in other cultures in Asia, Africa, Europe and Central and South America, but it has been a topic of much debate in the United States.

The ads were discussed on the "Today Show" Wednesday morning, where NBC's Chief Medical Editor Nancy Snyderman pointed out, "their message is absolutely important, this is not the right way to do it."

The Mother Nature Network points out that some parents consider the decision to co-sleep a personal one that shouldn't involve government interference.

While many experts and parents denounce co-sleeping, the practice also has outspoken (and sometimes closeted) supporters who say it has emotional benefits for parents and babies.

Dr. William Sears, who wrote about co-sleeping, in "The Baby Book," says it is safe to co-sleep as long as parents take the appropriate precautions.

"Put yourself behind the eyes of your baby," Sears told The Huffington Post during an August interview. "Ask, 'If I were baby Johnny or baby Suzy, where would I rather sleep?' In a dark lonely room behind bars, or nestled next to my favorite person in the world, inches away from my favorite cuisine?"

Christie Haskell, mother and writer for Cafe Mom's "The Stir" wrote that co-sleeping "can be a fantastic bonding family decision." She wrote she was "outraged" after seeing the Milwaukee Health Department's ad, and pointed out the babies in the photos weren't positioned correctly.

"They made sure there were tons of poofy and loose blankets and pillows that look like they're going to swallow the baby (who is on his/her stomach, not back)," Haskell wrote. "The suggestion is not only that co-sleeping is dangerous, but that parents who co-sleep must be ignorant of all safety precautions of any kind."

Milwaukee's decision to move along with the ad campaign was reinforced when a medical examiner announced an infant died after sleeping with his or her mother, the Journal Sentinel points out.

Although the ads have created a lot of buzz on the internet, a spokesperson for the Milwaukee Health Department told Ohio's WNWO that the city ran "similarly provocative ads" in the past and received a good response. Parents can call the phone number on the advertisement to receive a collapsible crib free of charge, the spokesperson added. 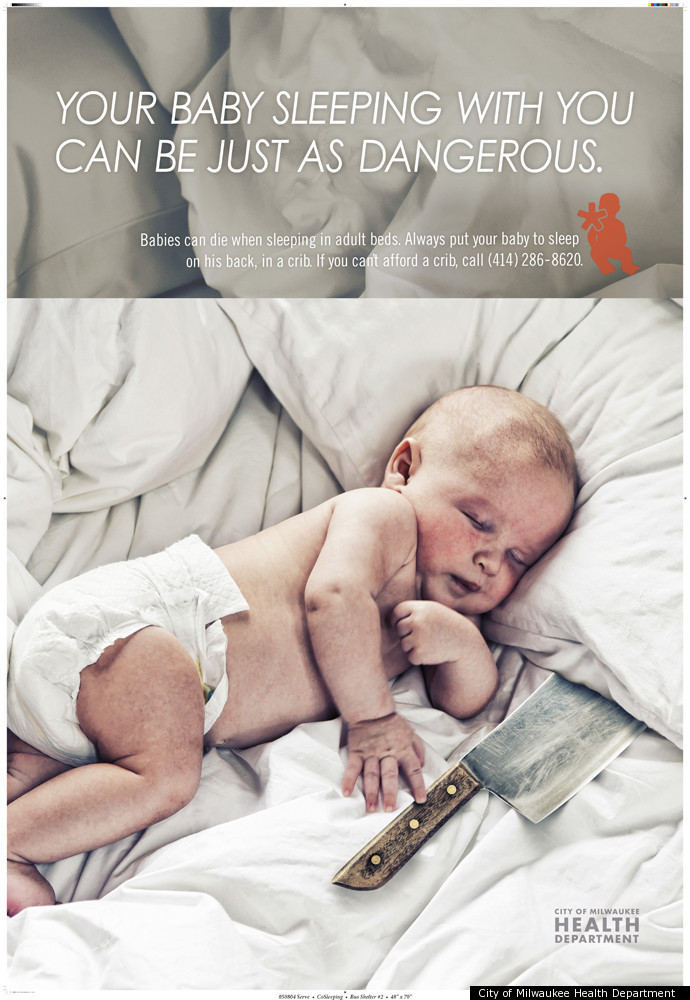 Related: Vintage Ads Targeted To Parents That Made Us Gasp