Coachella Music Festival released their official 2013 lineup in a tweet on Thursday evening, and the headliners for each day are Blur, The Stone Roses, Phoenix and Red Hot Chili Peppers as the closing night act.

This will be Coachella's 14th hurrah and its second year of splitting the festival into two identical weekends in order to accomodate their vastly multiplying audience. Weekend 1 will take place April 12-14 and Weekend 2 will be April 19-21.

Festival passes for both weekends go on sale Tuesday, January 29th at 10AM PST. Festival passes for Weekend 1 must be purchased with a shuttle pass or a car camping pass. New for 2013, the price you see is the price you pay — $349 for a GA ticket and $799 for VIP. Prices reflect all fees included. Layaway is no longer an option for either weekend. Last year's tickets sold out online in under two hours. 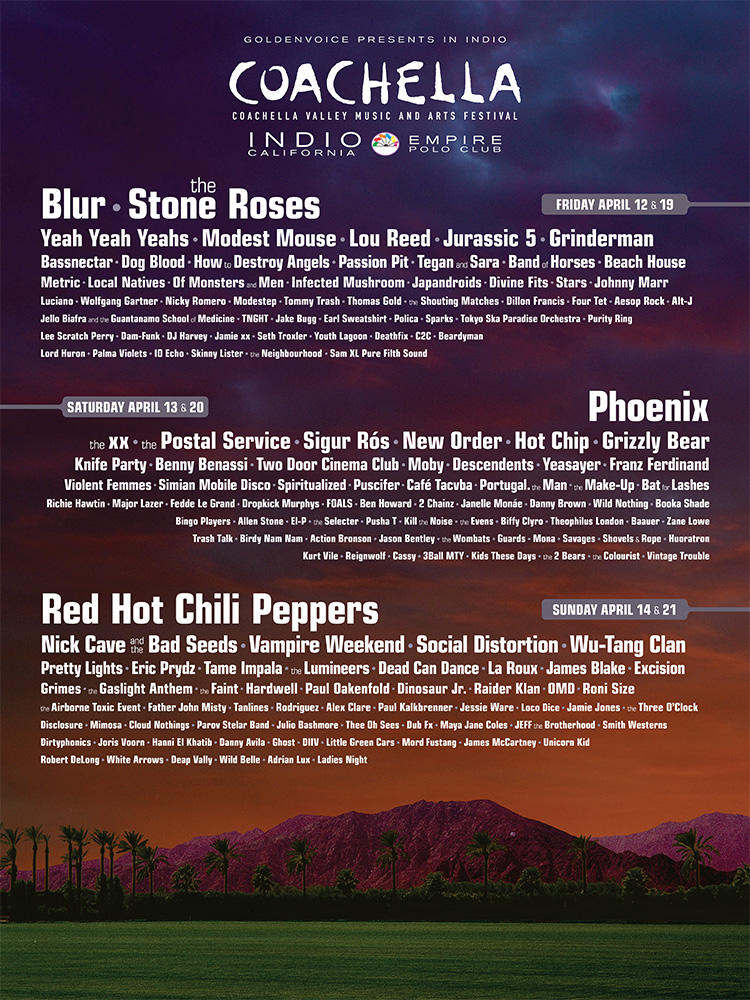 In mid-December, rumors of the lineup started swirling as Songkick, an event ticket site whose tagline is, "Be The First To Know About Concerts," sent out an email blast listing The Rolling Stones, Daft Punk, Phoenix and the Yeah Yeah Yeahs at Coachella 2013.

Coachella also posted a photo on their Facebook wall Jan. 4 of what appeared to be a rolling stone in the Coachella field, which further ignited squeals of joy across the internet that the famed rock and roll band might headline this year's festival.

But on January 22, Rolling Stone magazine announced that the Stones will in fact not appear at Coachella. On the same day, the music festival released a mysterious video featuring Radiohead's song Bloom, but with no further clues about the impending lineup.

Last year's headliners included The Black Keys, Radiohead, Dr. Dre, Snoop Dogg and, of course, the most famous hologram of all time -- Tupac. Over 80,000 people attended.

UPDATE: A rep for Coachella confirmed to The Huffington Post that people who already bought Weekend 1 tickets will still have in-and-out driving privileges. The only available tickets left for Weekend 1 include the purchase of a car camping pass or a shuttle pass. However, if one purchases a shuttle pass package for Weekend 1, you are not obligated to use it if you still prefer to day park like in year's past. General Admission tickets for Weekend 2 are still available.