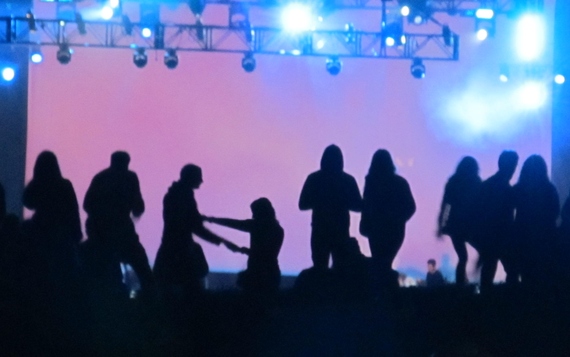 Hours and days after appearing at this year's Coachella Valley Music and Arts Festival, three major bands, in separate concerts, came to Berkeley to kick off the Greek Theater's 2015 concert season.

With the dust of Indio still on their shoes, alt-J, Alabama Shakes and Belle and Sebastian brought their Coachella sets (and then some) to the Bay Area for the venue's dazzling opening week.

Of the three, British group alt-J (performing on April 16 and 17) generated the most buzz. Redolent of Radiohead and Portishead, but sometimes playing material that seemed without precedent, alt-J has taken the sound that began with "OK Computer" to a whole new level.

And the fans, comprised mostly of a generation that has never known a world without Radiohead, sang along to every word of "Matilda" as if it were an anthem. And then they turned the hills above the theater (where I heard the show) and the parking lot below into dance floors as soon as they heard "Breezeblocks."

There was such demand for tickets, by the way, that an extra show was added - and they probably could've added a third, judging by the mob outside the venue (where you could hear everything perfectly). But a third night would have conflicted with their second appearance at Coachella.

Alt-J started with a track from its latest album ("This is All Yours") that kicked up a "Kid A" sort of ambience. Then a couple tracks from the first album, "An Awesome Wave."

"This is a song called 'Something Good,'" said lead vocalist Joe Newman, provoking the first of many loud cheers from the crowd.

That track was one of the highlights (and featured one of the most magical piano figures created in the Tens that I've heard).

Other high points were the eccentric a cappella number "Ripe and Ruin" and "Taro," which almost had "Baba O'Riley" intensity.

But the band saved the best for last with "The Gospel of John Hurt," a hypnotic stand-out from the new album; and "Breezeblocks," embraced by the crowd as if it were a classic.

Five nights earlier, on April 11, the Alabama Shakes, in the Greek season kick-off, performed the best modern soul I've heard in concert since Mayer Hawthorne opened for Foster the People at the same venue a few years ago.

When Brittany Howard belts it, you can almost believe Otis Redding or Janis Joplin, informed by the innovations that followed, has come to life in 2015. It's almost as if she's constantly on the verge of breaking into "Try a Littler Tenderness," or "Cry Baby," or a Rascals classic. .

And the new stuff, previewed here and set for release this month, is some of the strongest. Encore "Don't Wanna Fight," released in February, was particularly impressive, instantly seductive.

But, for me, the highlight was the rarely played (on this tour) "Hang Loose," which hit a fresh CCR-ish groove that got everybody going (even in the hills above the theater where I heard the show).

All told, they started strong, finished hot, but sagged a bit in the middle.

The next night, Belle and Sebastian, fresh from Indio, played a fabulous set (4/12). Frontman Stuart Murdoch was jazzed, charged, chatty, in rare form -- and in a decidedly Bay Area mood.

"We wanted to play the national anthem at the opening game," Murdoch said playfully, referring to the San Francisco Giants' home opener the next night in S.F. The crowd cheered. "...We were ready to sing the 'Banner.'"

Then, barely audibly, a cappella, Stuart took the mike and sang the lyrics that launched an indie juggernaut: "Make a new cult every day to suit your affairs...."

That led into the greatest "Stars of Track and Field" I've ever heard, complete with a brilliant horn solo that resounded way into the hills above the theater.

To think: that breakthrough track -- rarely played in concert, so it was a real treat -- is now almost 20 years old. I remember hearing it for the very first time on KCRW's "Morning Becomes Eclectic" show around Thanksgiving 1996. I immediately walked down Sunset Blvd. to the nearest record store, where I plunked down the better part of twenty for "If You're Feeling Sinister," a CD I still own and listen to. At the time, it felt like a new Ray Davies had arrived.

And it sort of still feels that way. The set here was packed with wonderful melodic gems. Highlights included the new single "Party Line," which got everyone going, "Dirty Dream Number Two," "The Power of Three," "Sukie in the Graveyard," and encore "La Pastie de la Bourgeoisie." Frankly, there wasn't a slack spot.

At set's end, Murdoch seemed taken aback a bit by the enthusiasm of the crowd. "It's so funny, we [scheduled] this around Coachella, but this is the one, isn't it?" Huge applause.

There were finds among the five opening acts at the three shows, too. The best of the bunch was New Jersey band Real Estate, who, at their best, hit a sweet spot where the Feelies, Death Cab for Cutie and the Grateful Dead intersect.

The other openings acts were Neko Case (whose band is sounding more like Blondie these days); an enjoyable London funk/soul group called Jungle; the interesting Perfume Genius (a.k.a. Mike Hadreas); and San Francisco's Tycho (who I missed).

(I should reiterate that I heard the concerts from the hills above the theater, where sightlines are limited, but the audio is loud and clear!)