There was a line of lawyers waiting to talk to me and I promise crime had nothing to do with it.

I'd just wrapped up an hour-long session on Coaching 101 for a group of lawyers. I've noticed that lawyers like giving advice. I mean, that's what they're supposed to do, right? So learning to coach is a great skill for them, since keeping conversations advice free is fundamental to successful coaching.

One of the lawyers was hanging in the back, positioning himself to be the last to speak to me. When it was finally his turn and the room had cleared out, he got very close to my face and said:

"Okay, I get it, I get it. I get the coaching stuff. But really, how can I give advice without looking like I'm giving advice?"

One thing we agreed on is that he did not "get the coaching stuff"-- but he sure gave us a good laugh! This is one of my favorite work moments from last year. I also got fantastic questions and comments about working with the different generations, which you can read about here.

I have many inspiring, educational, and even challenging moments to draw from because last year I spoke over 70 times around the world. In fact, I had a stretch of seven days where I had nine speaking gigs in five cities. I was speaking on the East Coast, the West Coast and in between, covering a total of 5,000 miles. I spoke to small business owners, corporate employees, and non-profit leaders in the healthcare, finance, academia, pharmaceutical, and manufacturing industries, covering topics such as crucial conversations, female leadership, energy management, emotional intelligence (EQ) and marketing specifically to each generation.

There is One Common Denominator

Despite the variation of locations, industries, and audience, there is a common denominator in all questions I get asked: working relationships. No one is asking me how to create the most effective spreadsheet or improve a technical skill. No one asks how to make a widget or fly a plane. What everyone struggles with is interpersonal skills and relationships, otherwise known as soft skills.

How does this relate to my work? We can do a quick rundown of my recent speaking topics (generations, EQ, crucial conversations, female leadership, energy management) and see pretty clearly. For example, people struggle with understanding generational perspectives and communicating within those perspectives. EQ is about both internal and external relationships. Crucial conversations need trust and speaking up in a relationship. Speaking up in a relationship with both men and women is fundamental to retaining female talent. Even energy management is about our internal relationship with our bodies and managing our energy and stress levels to improve relationships.

So if we boil this down, what's the secret sauce to the soft skills we need? Here are eight quick tips to create your own sauce:

Eight Quick Tips for Interpersonal Communication and Relationship Building
When approaching any interaction with another person, try these eight things:

Let's look at a basic example. 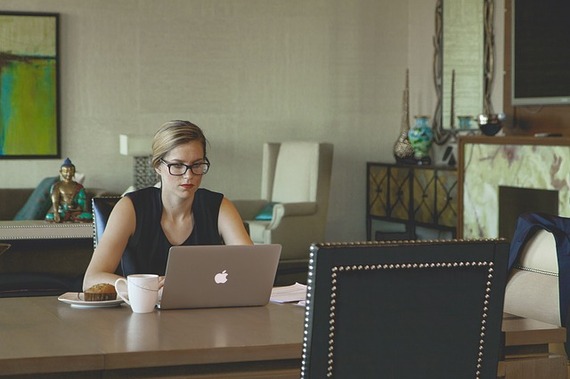 Tina is Aziz's manager; they are meeting in Tina's office because other members of the team mentioned to Tina that Aziz and Javier speak over each other, bicker, and refuse to collaborate, which is getting in the way of the team meeting deadlines.

To improve the team's chance for success, Tina decides to meet with Aziz to see what is going on. She's a little nervous that Aziz won't be open to a conversation about the matter and may act defensively.

Here is how Tina could handle the conversation with the eight tips in mind: 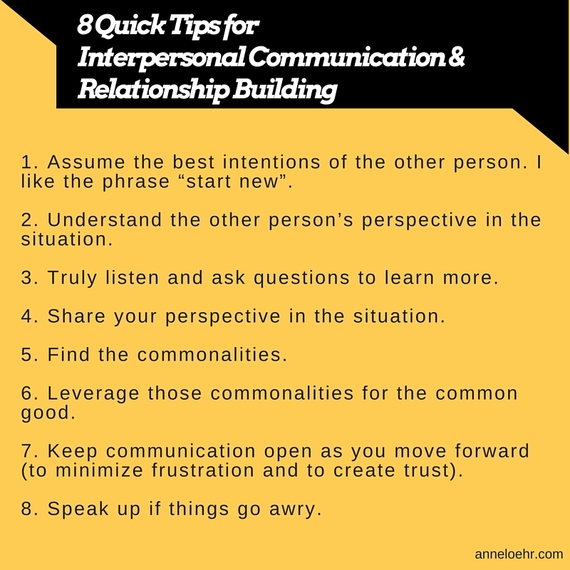 Step One: Before even starting, Tina is going to assume that Aziz has good intentions. He's not purposely trying to derail the team or hurt his coworkers. He's not trying to get Javier fired or miss deadlines out of spite. If she's honest with herself, she truly has no idea what is going on.

Step Two: When Tina starts talking to Aziz, she first lets him share his perspective. She makes Aziz feel that he can trust her by approaching him with empathy.

Step Three: While Aziz is speaking, Tina focuses on truly listening and asking questions. She not only listens to what he is saying with his words, she notices his body language and the energy in the room. He is sitting with his arms crossed and not making eye contact, which leads Tina to think he might be embarrassed or uncomfortable. She can feel that he doesn't really want to be having this conversation. This makes her re-evaluate how to make him more comfortable. 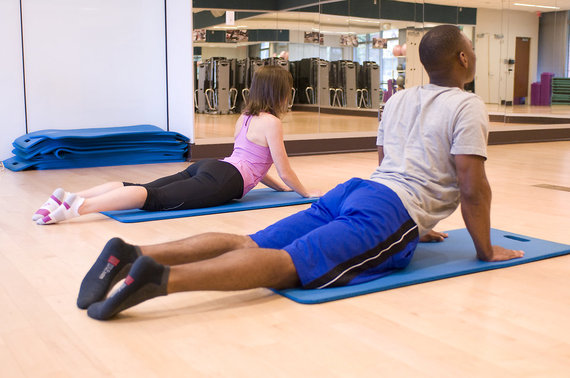 Aziz explains that Javier has no respect for him. According to Aziz, Javier won't answer his calls, tries to dodge scheduling one-on-one meetings, and constantly expects Aziz to pick up the slack of the team while he goes and enjoys himself at a midday yoga class.

To better understand Aziz and to help him understand the conflict, she asks open questions such as, "What does a successful relationship look like with Javier?" or "What does respect look like to you?"

Step Four: After truly listening to Aziz's perspective and asking him relevant questions, Tina shares her own perspective. In this case, she suggests that the conflict may be sparked by generational differences so she explains generational communication and behavior to him.

For example, when Baby Boomer Aziz thinks Millennial Javier doesn't respect him because he answers his voicemails with emails rather than calling, and leaves every afternoon for a yoga class regardless of workload, he's not seeing that these behaviors are sometimes generational. Millennials often prefer to communicate quickly via text and email, and that is normalized in their generation. It doesn't mean they don't care enough to answer the phone--they are just answering in a different way. And when his Millennial coworker leaves for yoga midday, it's not because he expects other people to do his work; it's because work-life balance is a Millennial core value. In fact, Javier is perfectly happy to work from home at night to get the work done.

Step Five: After Tina shared her perspective on the conflict, she tries to find commonalities. What do Javier and Aziz have in common when it comes to this situation? They both care about the success of the team. If Aziz didn't care, he wouldn't be upset that they weren't able to work together productively. And if Javier didn't care, he wouldn't work from home after hours. They are butting heads about how to communicate as well, which shows they both understand the importance of good communication.

Step Six: How can Tina leverage the commonalities for the common good? If Aziz cares about his team and knows communication is key, Tina can use those two commonalities as the framework for resolving the conflict between him and Javier. She can help him set goals for his team and create accountability, and she can plan a Lunch & Learn about communication skills. These things will help Aziz while also helping the team as a whole.

Step Seven: Now that Tina and Aziz have a game plan, she will follow-up in a month to see how the situation is going. She invites him to talk to her at any time if he's feeling frustrated and needs to let off some steam. This will keep communication open as they move forward.

Step Eight: Lastly, Tina has to hold herself accountable to speak up if things go awry. She is now aware of the situation and has developed an open dialogue with Aziz. For that to be valuable, Tina needs to call out any relapse in behavior she may see.

In closing to this story, I want to share another quote from one of my gigs last year:

"The only label we should be wearing is our name."

We bring all kinds of labels with us and see labels on others. She is a woman; he is Hispanic; they are Baby Boomers--all of these labels put people in boxes. We must "start new" with every interaction in order to give full potential to the relationship, and create room for productive communication.

We can all benefit from the practice of "starting new" in each interaction. I plan to keep this in mind as I move into 2016 and hope you will too.

What soft skills do you struggle with the most? Let's see how much we all have in common. Leave me a comment below, send me an email, or find me on Twitter.

Anne Loehr is a sought after international keynote speaker, writer, consultant, and trainer. She helps leaders in large organizations connect their everyday decisions today to the future workplace. Her end goal is to help organizations retain their top talent and not only survive, but thrive. To learn more about Anne, check out www.anneloehr.com or follow her on Twitter.