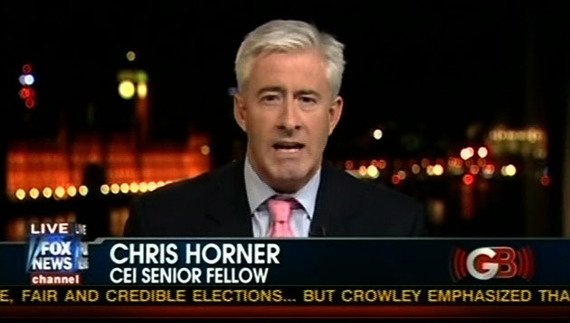 After all, that's what we learned from the bankruptcy filings of two other major U.S. coal companies, Arch Coal and Alpha Natural Resources. The companies' lists of creditors accompanying their chapter 11 bankruptcy filings both cited known climate science deniers. So far, the bankruptcy cases have not revealed the details of these financial relationships. But there is now no doubt the coal companies contracted with these groups and individuals to either make a donation or pay for services.

This new evidence is important at a time when coal and oil and gas companies are under increased scrutiny about their ongoing climate science disinformation campaigns. ExxonMobil, for example, currently faces state and possibly federal investigations into whether the discrepancies between what the company knew about climate science and what it told their shareholders and the public amounted to fraud.

Of course, there's no shortage of historical evidence of the coal industry's track record of deceiving the public about global warming. In 1991, for example, coal trade associations formed a short-lived front group called the Information Council on the Environment that ran a national public relations campaign downplaying the known risks of climate change. All through the 1990s, coal trade groups also were members of the Global Climate Coalition, an alliance of companies and business groups that disputed the findings of the U.N. Intergovernmental Panel on Climate Change (IPCC) and, later on, helped scuttle the Kyoto Protocol climate treaty. And, more recently, the American Coalition for Clean Coal Electricity paid a lobbying firm to send forged letters to members of Congress from actual nonprofit groups, including the NAACP and the American Association of University Women, espousing fabricated opposition to a 2009 climate change bill.

But such coal company connections have been harder to pin down in the current era of so-called dark money. That's what makes the latest disclosures so noteworthy: They indicate that coal industry disinformation campaigns have continued even as the scientific evidence that burning fossil fuels is driving climate change has only become stronger.

The creditor list for Alpha Natural Resources -- which filed for bankruptcy last August -- indicates that the company has been especially active in supporting the denier network. As first reported by The Intercept, Alpha -- the fourth largest U.S. coal company -- has financial ties with a half dozen denier organizations, some which have direct links to billionaire brothers Charles and David Koch, owners of the coal, oil and gas conglomerate Koch Industries. The Koch-affiliated groups include Americans for Prosperity, the Institute for Energy Research, and Freedom Partners Chamber of Commerce, a de facto Koch bank that disburses donations from anonymous, wealthy conservatives to groups that advocate rolling back public health, environmental and workplace protections.

Other Alpha creditors include the U.S. Chamber of Commerce, which questions the legitimacy of climate models; the Heartland Institute, which is probably best known for its billboard likening climate scientists to the serial killer Ted Kaczynski; and the American Legislative Exchange Council (ALEC), which convenes conferences for its state legislator members featuring speakers who distort climate science and disparage renewable energy. One of the speakers at a summer 2014 ALEC conference, for example, was Heartland Institute President Joe Bast, whose slide presentation falsely claimed: "There is no scientific consensus on the human role in climate change" and "The Intergovernmental Panel on Climate Change ... is not a credible source of science or economics."

Arch Coal, the second largest U.S. coal company, listed ALEC and E&E Legal in its list of creditors when it filed for chapter 11 protection in January. Just last month, the Wall Street Journal reported that the company donated $10,000 to E&E Legal in 2014. E&E Legal's executive director, Craig Richardson, told the Journal the contribution was for "general support."

The exposure of Horner's financial ties to coal companies is significant because he is a regular guest on Fox News Channel, which identifies him by his affiliation with CEI or E&E Legal but not by his connection to the coal industry.

Despite his lack of scientific expertise, Horner routinely critiques scientific findings, has called for spurious investigations of climate scientists affiliated with the IPCC and NASA, and has harassed scientists by filing intrusive open records requests with the universities where they work. As legal counsel for the Energy & Environmental Legal Institute and the Free Market Environmental Law Clinic -- which work in tandem -- Horner has targeted a number of leading climate scientists, including James Hansen and Katharine Hayhoe. Perhaps his most notorious lawsuit was against the University of Virginia to obtain emails, draft research papers, handwritten notes and other documents related to the work of Michael Mann, lead author of the famous "hockey stick" study demonstrating the link between increased fossil fuel use and rising global temperatures. The Virginia Supreme Court ultimately ruled in favor of the university and Mann, affirming the school's right to protect the privacy of its researchers from overly broad open records requests.

Besides Alpha and Arch Coal, Horner has ties to other coal companies. Last summer, he was a featured speaker at a private $7,500-a-person golf and fly-fishing retreat sponsored by Alpha, Arch Coal and four other coal companies: Alliance Resource Partners, Consol Energy, Drummond, and United Coal. After the event -- the 2015 annual Coal & Investment Leadership Forum -- attendees received an email from the coal company CEOs praising Horner, according to the Center for Media and Democracy, a nonpartisan political watchdog group that first reported the connection between Arch Coal and E&E Legal. "As the 'war on coal' continues," the email stated, "I trust that the commitment we have made to support Chris Horner's work will eventually create a greater awareness of the illegal tactics being employed to pass laws that are intended to destroy our industry."

Given the recent spate of bankruptcies, the companies' commitment to Horner likely will create a greater awareness of something quite different: that the coal industry -- along with the likes of ExxonMobil and Koch Industries -- is still funding denier groups to spread disinformation about climate science and delay government action. It is time we held these companies accountable.