A groundbreaking new report has, for the first time, estimated the human toll from India's dirtiest fuel source. According to the study 80-115,000 people died prematurely as a result of emissions from coal-fired power plants in 2012. Those deaths, along with a slew of other health impacts, including millions of cases of asthma, respiratory distress and heart disease caused by coal emissions, cost the Indian government $3.3 to $4.6 billion. The toll is staggering and it comes at a time when the Indian government seeks to dramatically expand its reliance on this destructive fuel source with a pipeline of coal projects matched only by China. 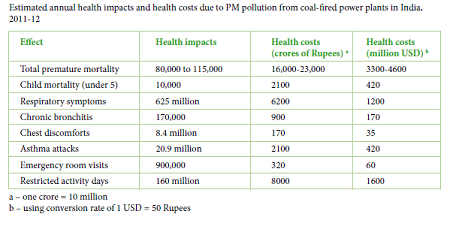 The study, conducted by Delhi based research group Urban Emissions (India) and commissioned by Conservation Action Trust in partnership with Greenpeace reveals the health impacts of some of the weakest air pollution standards in the world (see the comparison of emissions from the International Energy Agency below).

Debi Goenka of Conservation Action Trust says of Indian emission standards, "They are either absent or shamefully behind those of even China, let alone the EU or U.S. Does the Ministry of Environment consider Indian lives to be less valuable?" 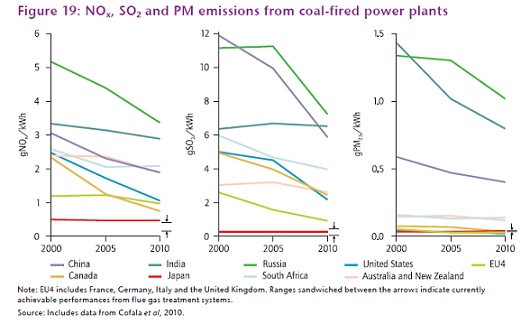 Dr. Sarath Guttikunda, Director and Scientist at Urban Emissions, also an adjunct faculty at Desert Research Institute (Reno, USA) and Adviser to the Clean Air Asia program in India, was the lead author. According to Dr. Guttikunda, "Thousands of lives can be saved every year if India tightens its particulate emissions standards, introduces emission limits for pollutants such as sulphur dioxide, nitrogen oxides and mercury and institutes mandatory monitoring of emissions at plant stacks, making the data publicly available in real time."

Even worse, the burden caused by woefully inadequate emissions standards is not borne equally. The study's results show that the burden of death and disease falls most on the Delhi-Haryana and Kolkata-West Bengal-Jharkhand regions as power plant concentrations, wind patterns and population density conspired to cause an estimated 8,800 and 14,900 deaths in 2012 respectively. That means that while coal plants may be far away from India's growing middle class, their pollution is finding its way into the lungs of Delhi residents and their children. To see how this pollution travels widely across the country check out the visualizations here (Additional information from the study can be found at the Urban Emissions website).

Perhaps more worrying, however, is the direction India is headed. Coal kills 100,000 today, but what if an estimated 588 GW of new coal comes online? That is five to six times the number of existing coal plants (and twice the size of the U.S. coal fleet) all being built without modern pollution control equipment. India may be facing an environmental disaster of Chinese proportions.

But that is not the only impact these plants will have. Their construction is causing a social crisis with local opposition leading to violent repression, death, and arrest. At the same time economic realities caused by skyrocketing international coal prices and domestic coal shortages, have created a wave of sub prime coal loans so great that Indian banks worry it poses systemic default risk. On top of it all the Indian government is pushing to mine what remains of the country's pristine forests to plug the growing shortage of fuel the pipeline requires. All to say that India is paying a far greater price for its coal reliance than even these numbers reveal.

But it need not happen. While the U.S. and India are clearly very different contexts in many ways this reminds me of what happened in the U.S. just a few short years ago. Between 2001 and 2010, the U.S. almost locked itself into a generation of 180 costly and unneeded coal-fired power plants. Campaigns led by the environmental community, the enacting of state renewable energy standards, and more-abundant competitive sources like energy efficiency, wind and natural gas, headed off that almost catastrophic coal rush.

Now India faces a similar problem. And just like the U.S. civil society is waking up to the threat. As Vinuta Gopal of Greenpeace puts it, "This is a wake-up call for our planners; the ongoing coal expansion is irrational and dangerous. Pollution from coal power plants is killing thousands; the coal is mined by sacrificing India's forests, tribal communities and endangered species. And at the end of it all, coal has failed to deliver energy security. We need a moratorium on new coal plants and ambitious policy incentives to unlock the huge potential India has in efficiency measures, wind and solar."