In a blatant disregard of the Surface Mining Control and Reclamation Act, among other regulatory guidelines, the Illinois Department of Natural Resources (IDNR) has quietly entangled itself in an inane and potentially deadly coal slurry scandal.

If allowed to continue construction under its violation-ridden Emergency Permit, the 80-foot-high impoundment of toxic coal slurry inside the town limits of Hillsboro, in central Illinois -- covering one square mile -- would rank as one of the most disgraceful monuments to corruption and regulatory negligence in the Quinn administration.

"It is one thing to have staff at our state mining regulatory agency whose background and allegiance is with the coal industry. It's another thing to have a state agency that is not protecting our state environment and not doing their job for the public," said Joyce Blumenshine, the Mining Issues Committee Chair for the Illinois Sierra Club. "These mines will be toxic legacies for generations to come. Future generations will have to pay the environmental damages whether it is to their own health, to the viability of the lands these toxic time-bombs sit on, or the loss of ag lands and water resources."

On October 11th, as if to mock the health and safety of Illinois citizens on the anniversary of the Martin County, Kentucky coal slurry disaster, which dumped 300 million gallons of toxic sludge into the area's waterways in 2000, the IDNR held a public hearing to assure local citizens that its oversight and Emergency Permit for the violation-ridden construction of the "High Hazard" dam was safe and legal.

Stunned by the state agency's exemptions and permit modifications, local resident Mary Bates testified, among a growing chorus of outraged Hillsboro town residents and besieged farmers, on the IDNR's "bait and switch" tactics:

"Did anyone on the county board or city council read the first 399 application? That application called for a non-impounding impoundment. That's the bait. IDNR approved it without asking the question "Where's the slurry impoundment?" Now we have a Class 1 high hazard dam which has the potential, in the event of dam failure, for the substantial loss of life and/or property downstream." 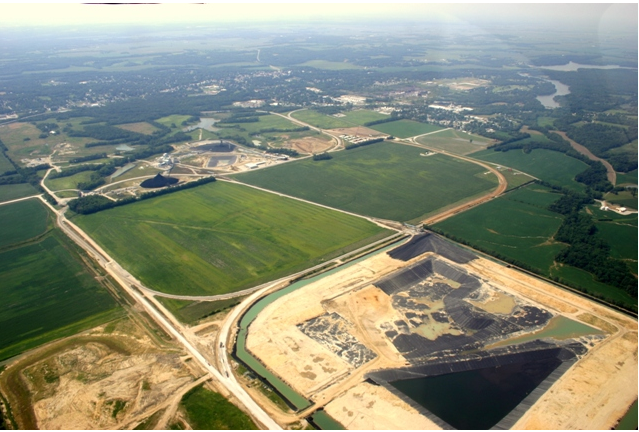 One thing is clear from the hearing transcripts in Hillsboro: If local residents and farmers hadn't intervened and served as watchdogs, the reckless state agency would rubber stamp virtually every demand and infraction and lawless maneuver by a coal company that has already racked up water pollution violations in the nascent stage of production. (The Deer Run Mine, in fact, owned by billionaire Appalachian coal baron Chris Cline, is overseen by CEO Dwayne Fransico, who was formerly the president of Massey Energy's criminally convicted Aracoma Coal Company.)

"Early in the mine permit process for the Deer Run Mine, citizens pointed out that the proposed coal slurry impoundment was not adequate for the operations that were proposed," Blumenshine said. "We had a volunteer civil engineer assess the plans. We knew this was a bogus design and listed the coal waste area issues in our legal challenge to the mine permit. All along the way, the IDNR Office of Mines and Minerals staff defended the design. Well, the permit was approved in February 2009, and by 2010, the mine had filed for the big change in the coal slurry impoundment. If we had had on paper at the time of the permit public hearings that the mine was going to build an 80-foot-high, thousands-of-feet-circumference toxic slurry stew container plunked on the flat land local citizens might have had a little more interest in this issue. This is worse than bait and switch. This is outright deception and makes liars of the coal company and the IDNR, because IDNR never challenged the inadequate design they approved in the permit."

Under attack by devastating longwall mining plans, farmers and residents in central and southern Illinois are closely following the Illinois Supreme Court, as it finally deals with the 1999 coal slurry tragedy in nearby Clinton County, which contaminated the Pearl Aquifer with toxic coal waste, and ruined the lives of many Illinois citizens in one of the state's most shameful legacies of regulatory negligence.

Ten days after the October hearing in Hillsboro, on the anniversary Aberfan coal slurry disaster, which took the lives of 144 school children and town residents, respected Illinois engineer Robert Johnson responded to the IDNR's clear efforts to limit public participation and access to information on the coal slurry site, and delineated the numerous levels of violations, incompetence and wildly outdated state regulatory process. In particular, Johnson noted:

The application form, on which Permit No. 399 Significant Revision No. 1 was prepared, developed by the Office of Mines and Minerals apparently decades ago, is seriously deficient... Once a person becomes experienced with SMCRA rules and, therefore, the intended purpose of IDNR's application form, it becomes more apparent that the purpose of the form is to camouflage SMCRA requirements and allow the mine to operate without full compliance to SMCRA regulatory provisions.

The IDNR is not the only entity attempting to restrict public discussion on the coal slurry impoundment -- the Hillsboro's Journal-News refused to publish Johnson's letter to the editor or other critical letters and editorials on the slurry impoundment and related longwall mines.

How can citizens think the state offices that approve mine permits can ever be trusted when you see the fiasco at the Deer Run Mine? First in 2010 the IDNR Office of Mines and Minerals approves a series of 'Insignificant Permit Revisions' that let the coal slurry design be totally changed and that let the entire base be constructed. This is done without any chance for the public to request a hearing. Then in 2011 the Office of Water Resources, who is the state expert agency on high hazard dams, issues a Cease and Desist construction order to the mine, because all this work has been done without the OWR office ever issuing an approved permit. Then weeks pass and the IDNR issues a statement that the Cease and Desist order was premature and months later issues an emergency construction permit approval for this monstrous 80-foot-high coal slurry impoundment, that, oh, by the way, is being built in the city limits of the town of Hillsboro. And then in the fall of 2011 IDNR Mines and Minerals holds a public hearing on this high hazard dam coal slurry impoundment saying that they are just in the beginning steps of reviewing the project and that they can make changes yet.

The IDNR public hearing process is worse than a joke. They hold hearings in an attempt to look like the coal companies are not running the agency. Basically whatever the coal companies do, they know they will get it approved by the state. Citizens in Illinois should be aghast. Our precious water resources and our prime farmlands, not to mention the health and safety of many citizens in coalfield communities, are just collateral damage to the mine permitting charade in Illinois.

Mickey McCoy, the former mayor of Inez, Kentucky, which bore the brunt of the Martin County disaster a decade ago, added:

The mayor of Hiillsboro better seek a grant to supply each household with a water craft to escape when the dam breaks. And while he's at it find funds to train the folks in another livelihood for after the flood of toxic waste; the land will forever be unfit for farming and the water will be filled with carcinogenic heavy metals. I'll be praying for Hillsboro.