The Australian Minerals Council just scored a spectacular own goal after their #coalisamazing ad.

Haven't seen it yet?

Not many people on Twitter seemed to be buying the perks of coal in 2015 with most calling the ad irresponsible and absurd to be promoting the use of coal, the prime offender for climate change. 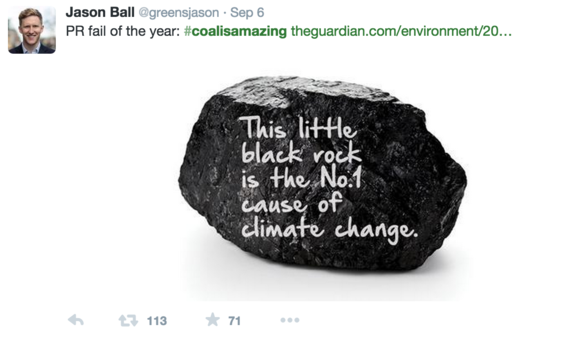 Others reflected on how else coal has helped humanity... 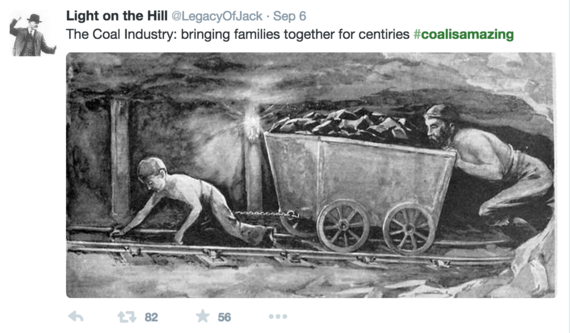 And so #coalisamazing became a viral hit and made the little known Australian Mineral Council a Twitter sensation... just not in the way their marketing team would have wanted.

So if we dig a bit deeper past these tweets mocking a PR fail what can we say about the shifting perceptions to fossil fuels.

For me there is one word to sum up this ad, and it is -- desperate. This really feels like the dying swan song for an industry which is in inevitable collapse. I feel like VCR manufacturers might have pulled off a similar ad to stem the rise of DVDs if YouTube had been around in the '90s. What is a VCR? My point, exactly.

Fossil fuels are increasingly becoming risky investments as visions of the future focus on a future underpinned by a low carbon economy. Yes, the transition is slow but with the growing divestment movement, global calls for strong climate action and stigmatisation of climate laggards it is safe to say scales are edging away from fossils.

The rich energy economies of the next generation will not be those who control vast reserves of coal, oil and gas as the global scales are tipping to a business environment that places a high cost on carbon. We need to wake up to this reality and start getting our act together to harness the vast economic and job creation opportunities that accompany clean energy.

Clinging onto the idea that fossil fuels create jobs like this ad does neglects the much bigger opportunities from a renewable energy economy which invites innovation and bold large-scale engineering energy solutions.

And finally... if you still don't reckon coal isn't amazing then check out this parody.