The U.S. Coast Guard says it has been kicking ass and taking drugs (so to speak) in the Caribbean sea this winter: crew members seized 4,000 pounds of cocaine in one incident, and made two other busts involving 940 pounds and 1,100 pounds of marijuana.

Much of the contraband was offloaded at the Coast Guard Sector Key West this week. The most valuable haul came December 22, when the Coast Guard Cutter Dallas spotted personnel aboard a 40-foot speedboat off Honduras jettisoning multiple bales into the water.

Not only did the crew nab four suspected smugglers, they recovered 77 bales of cocaine with a whopping $48 million street value.

A few days later, Dallas crew members on patrol launched a small boat to stop another speedy vessel south of Jamaica. As those aboard the boat began to throw bales overboard, the small boat crew recovered 16 packages of marijuana -- preventing the trafficking of 940 pounds of pot worth roughly $852,000, and turning over three suspects to the Jamaican Defense Force.

Most recently, the Coast Guard Cutter Confidence pursued a 28-foot speedboat in international waters south of Cuba on February 9. When those on board began tossing bales overboard (sensing a theme yet?), Confidence launched a second boat that collected 36 bales of marijuana. Six people were detained.

Cutter Dallas' two busts served as a spot of pride in the highly-decorated ship's final days. The Coast Guard is decommissioning the aging Charleston, South Carolina-based Dallas, which saw action in Vietnam and will now be sold to the naval forces of The Philippines.

"These old cutters, they cost too much, they break down too much," Coast Guard spokesman Paul Rhynard told the Charleston Post and Courier. According to a recent HuffPost report, the Coast Guard is battling its increasingly rusty fleet even as it attempts to battle narcotics smuggling and threats to homeland security.

Check out photos of the smuggling busts below: 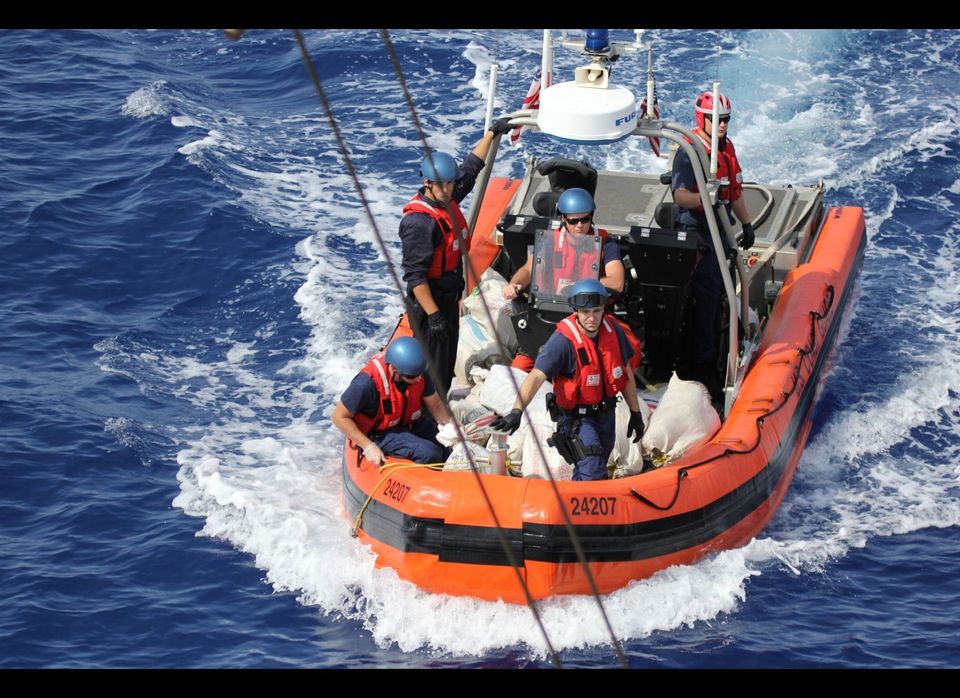