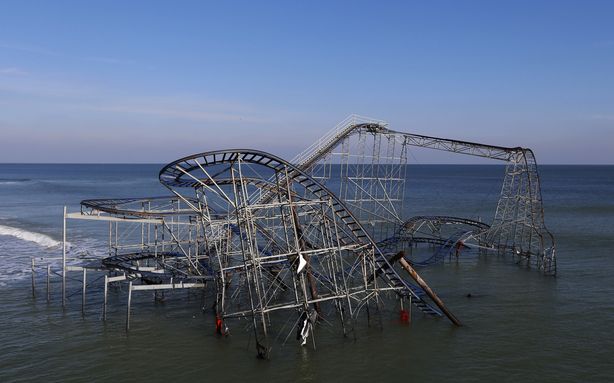 Six months after Hurricane Sandy lashed the East Coast, officials from coastal communities along the Eastern seaboard sat down for the first time to discuss the hurricane's consequences and how to best protect their residents from sea level rise. The meeting, which took place in New York City on Wednesday, was sponsored by the Union of Concerned Scientists. The nonprofit science advocacy group released a report on sea level rise on Monday.

Rising sea level is what linked Sandy directly to global warming. Over the last century, the ocean off the New York coast rose 13 to 16 inches, making flooding from Sandy a lot worse. The super storm triggered an estimated $60 billion in estimated losses in New York and New Jersey alone.

"We got a glimpse of our collective future," said Joe Vietri, director of the U.S. Army Corps of Engineers' coastal and storm risk management program, during a press briefing. "Clearly we know climate change and sea level rise are right here. We are living it right now."

The 25 officials at the meeting -- who hail from Florida, New Jersey, New York, North Carolina and Virginia -- spent the day comparing notes on how their cities and counties are adapting to sea level rise. Each of them are facing comparable problems, including beach erosion, increased flooding from storm surge, saltwater intrusion into drinking water wells, and compromised drainage systems. The officials discussed a number of adaptation strategies, including elevating homes, building sea walls and floodgates, using marshlands and artificial reefs to buffer storm surge, and reevaluating new development in the most vulnerable areas. Some municipalities are even considering elevating their entire town.

For some participants, such as Stephen Marks, Hoboken, New Jersey's assistant business administrator, Hurricane Sandy erased any doubts in his town about global warming. "The debate about climate change is essentially over," said Marks, whose 2-square-mile municipality of 50,000 was overwhelmed by 500 million gallons of Hudson River water. "Hurricane Sandy settled that for, I would say, a majority of the residents of our city."

For others, such as Broward County, Florida, Mayor Kristin Jacobs, Hurricane Sandy was just an extreme example of the same old same old. "We've been dealing with the effects of climate change for quite some time," she said. Broward County, she pointed out, established a climate change "compact" with three other South Florida counties in 2009 to address chronic flooding and other global warming impacts. Based on local trends and global projections, the compact -- which collectively represents 5.5 million residents -- expects the sea level off its coast to jump 3 to 7 inches by 2030 and 9 to 24 inches by 2060.

Development pressure on U.S. coastlines is bound to make a bad situation worse in coming decades. In 2010, more than 123 million Americans -- 39 percent of the U.S. population -- lived in coastal counties, according to the National Oceanic and Atmospheric Administration. NOAA expects the coastal population to increase by 8 percent to 133 million by 2020.

Vietri, who is overseeing the Army Corps of Engineers' Hurricane Sandy study, bemoaned the fact that despite greater public awareness of climate change and sea level rise, "You still have people by the truckload moving into high hazard coastal areas."

Vietri also criticized coastal communities for rushing to rebuild boardwalks and other beachfront infrastructure without considering sea level rise projections and the growing threat of storm surge. "This is a subject of great frustration for me," he said. "You would think common sense would dictate you would design your protection and then put your boardwalk in, not the other way around. ... I would even argue if, in fact, you even should rebuild them."