With a potential BP settlement for the Gulf of Mexico oil spill possible as early as this week, Gulf Coast communities are speaking up, urging Congress to quickly pass the RESTORE Act. Passage of this bill would ensure that fines for the spill are dedicated to restoring the communities, environment and economy of the Gulf.

I hope that lawmakers hear this message. And in a time of tough budget decisions, I hope they also hear the broader argument underlying the strong public support for the RESTORE Act -- that funding for targeted coastal restoration is a smart investment that produces very significant returns.

As the Gulf oil spill made tragically clear, healthy coastal habitats are essential to the economic and social well-being of coastal communities. Coastal wetlands and the rivers that drain the continent produce the fish and shellfish that are caught in U.S. coastal bays. Salt marshes, oyster reefs, seagrass meadows and coral reefs help to prevent erosion and also protect our communities from storm surges.

The bad news is that over the nation's history we have lost much of this natural capital, simultaneously losing the vital services coastal systems provide in the process. The loss of oyster reefs, seagrass beds and salt marshes means that coastal bays produce fewer fish and crabs now and don't have the capacity to filter the pollutants that they did a century ago -- outcomes that make a difference in our quality of life and the economic well-being of coastal communities.

The statistics are alarming. Studies show that approximately 30 percent of underwater grasses are lost; 50 percent of coastal wetlands are filled, ditched or drained; and 85 percent of oyster reefs have been overfished, dredged away, buried with sediment or made unproductive by pollution, diseases and changes to river flows. And unless a wide range of conservation and restoration actions are taken, we could lose up to 70 percent of coral reefs by 2050.

The good news is that we know how to bring these systems back and investments in their restoration make good economic and environmental sense.

Since 2001 for example, The Nature Conservancy and the National Oceanic and Atmospheric Administration (NOAA) have partnered to restore the health of degraded habitats in places and ways that benefit not just local marine life, but local communities and coastal economies as well.

Beyond the environmental benefits, these projects have shown that restoration pays off for coastal communities, producing jobs for direct restoration work and supporting coastal communities through increased fish production. In 2009, the NOAA awarded eight Recovery Act-funded projects to The Nature Conservancy. From scientists and engineers to tugboat operators and construction managers, these projects have created or sustained more than 950 jobs, or 39 jobs per $1 million in restoration funding. That's two to three times more jobs than typically produced by "gray" infrastructure projects, such as levees, dams, roads and bridges.

And once complete, these projects will pay for themselves many times over through the valuable services that healthy, functioning coastal systems provide to people. These investments produce fish for recreational and commercial harvests, filter water and reduce pollution, and make coastal communities more resilient to sea level rise and coastal erosion.

For example, a recently completed study by The Nature Conservancy shows that a pair of proposed oyster reef restoration projects in Mobile Bay would generate some $36,000 per year in increased seafood sector sales from additional fish and crab catch in Alabama's commercial fisheries. Researchers elsewhere have shown that a single acre of oyster reef or seagrass can remove $3,000 worth of nitrogen pollution per year -- pollution that otherwise decreases water quality and costs society money in the form of reduced fish catches and lost tourism revenue.

Community engagement also provides tremendous leverage for the public funds used in coastal restoration initiatives. In the first decade of the Conservancy's partnership with NOAA, more than 100,000 volunteers contributed their time and talent, showing that coastal communities are committed to restoring and stewarding their vital coastal resources. This strong community support speaks volumes about the public's appetite for healthier coasts. It's not just environmentalists who recognize that coastal restoration is a worthwhile investment. 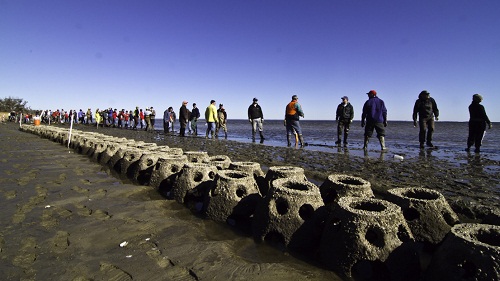 Twenty years ago, the field of marine habitat restoration was in its infancy -- we had little ability to respond to tragic events like the Exxon Valdez oil spill. Today, thanks to projects like those funded by NOAA, we know how to help our coastal habitats and communities heal. Now, in the face of necessary spending reductions to address the budget crisis, I hope that our lawmakers get the message that coastal restoration is both an economic and ecological imperative, a worthwhile investment that will more than pay for itself in the long run.

Photo: In Mobile Bay, Alabama, 500+ volunteers worked in teams to build ¼ mile of oyster reef, creating a living shoreline that will expand the marsh, slow erosion and provide habitat for oysters and countless other species in the Gulf. © 2011 Erika Nortemann/The Nature Conservancy