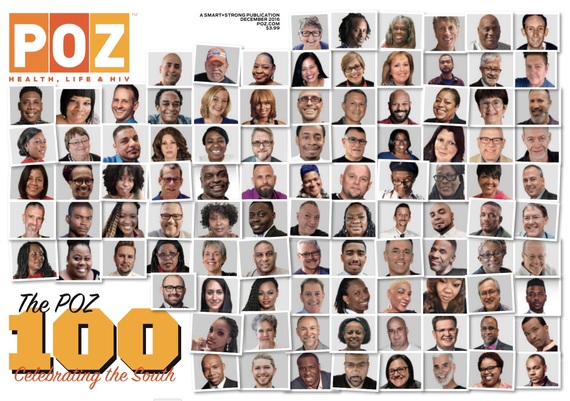 I am a born and bred Yankee. New York City is where I call home, but the South has a special place in my heart. My first experience in the South was a family trip to Florida when I was 2 years old. I admit that my memories of Miami and Disney World are cloudy, but they're happy.

I learned from my friends that the South indeed has obstacles to overcome, but it also has people who are capable of rising above those obstacles, if only given a real chance to do so. Having made more friends from the South over the years, I continue to believe that Southerners, like all of us, just need some help so they can help themselves.

In that spirit, we've dedicated this year's POZ 100 list to spotlighting the good deeds of advocates from the South--all 100 are on our gatefold cover. This year's list includes people living with the virus and people who are HIV negative from across the region, as defined by the U.S. Census. Click here to read the empowering stories of these leaders.

As is true across the country, the faces of HIV/AIDS in the South are diverse. Showing them all is impossible, but two of this year's POZ 100 honorees -- Steven Romeo and Alex Smith -- are trying their best to literally show as many of them as they can. Click here to read more about their photo project titled "IAMHIV" and to see some of the portraits.

Another project that shines a light on the realities of HIV/AIDS in the South is a documentary made by filmmaker and journalist June Cross. Titled Wilhemina's War, the film tells the story of Wilhemina Dixon, a South Carolina resident and the daughter of sharecroppers. She is HIV negative, but Dayshal Dicks, her granddaughter, was born with HIV.

The documentary follows Wilhemina and Dayshal over the course of five years. We see many of their highs and lows, including the death of Dayshal's mother, who was lost to AIDS. As we learn about their personal struggles, we also learn the extent of how the virus has affected both rural and black communities. Click here to read more.

As we focus this year's POZ 100 list on the Southern United States, we do not want to overlook the fight against the virus in the Global South. In honor of World AIDS Day, which is marked annually on December 1, Josephine Nabukenya of Uganda reminds us of the hope for an end to the pandemic.

Born with HIV, Josephine is an ambassador for the Elizabeth Glaser Pediatric AIDS Foundation. The 23-year-old found out at the age of 10 that she is HIV positive and has been an advocate ever since for youth living with the virus. Click here to read more.