I hope readers won't think I'm disingenuous in my pledge if I nominate someone else to perform the community service: my dog.

Off and on over the past eleven years, I've accompanied our 110-pound English Labrador Cobber on visits to the sick, the handicapped, and the disturbed. I've never had to train him for this work (although he has been registered as a "therapy dog" with the magnificent PAWS program). In fact, he trained me.

Our "teamwork" began when our two eldest children, now in their teens, were in pre-K. Cobber, gentle and calm by nature, has always been especially gentle with children. When under siege by toddlers and roughhousers, he exhibits the same kind of stoicism as a Londoner during the Blitz. You can push his nose, tug on his ears, bodycheck him, attempt an air landing on his back, and at most he will emit a heavy sigh before closing his eyes and resuming his nap. Somehow I persuaded the school principal to allow Cobber into the building on my children's birthdays: Cobber would show up pulling a flotilla of helium balloons tied to his collar. In his mouth he'd carry a little sack containing his parcel of "tricks:" a tennis ball, a newspaper, and a brush. The children would take turns tossing the ball to him, brushing his coat, and after, applaud his best trick -- fetching the paper. 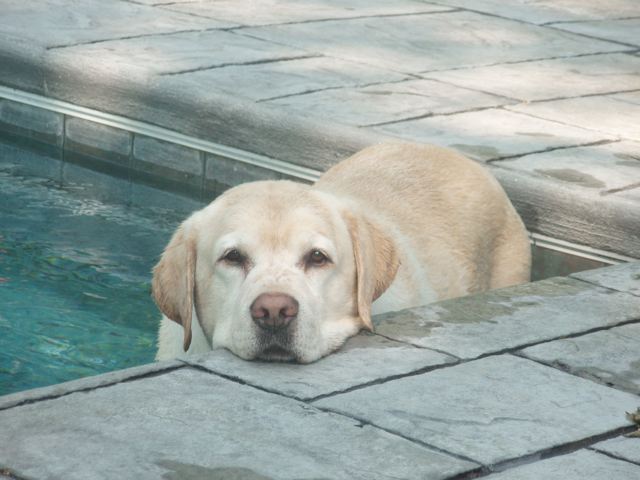 This was one he taught himself. At one time, in the pre-Internet age, as many as five different newspapers landed on our front walk (or more often, in the bushes) every morning. After observing my husband collect them a few times, he got the idea, and from then on assumed the daily task. You would open the front door, say "Carry paper!" and out he'd charge, running back and forth until they were all picked up (even the heavy weekend supplements, which he had to drag). We soon realized that Cobber could count: If only four had arrived, he'd go back without prompting and start searching the bushes. Occasionally he made up for the loss by fetching our neighbor's paper.

So in the classroom, I'd place the newspaper as far away as possible from Cobber, sometimes on a low shelf. Then on command he'd retrieve it, cheered on by the children.

When my kids got too old for this dog and mommy show, I wondered how we might take it on the road, so to speak: Cobber never seemed happier than when he was visiting a classroom performing his "work." I found out about a program here in D.C. that organized dog visits to sick children in hospitals. Who would be more perfect for this than Cobber?

We drove out to a facility in which Cobber had to pass an "exam" in order to be certified to enter hospitals and other public buildings. This exam consisted of proving he could walk well on a leash, follow basic commands, would not jump up on people, nor be startled by sudden noises or the site of people in wheelchairs or walkers.

The only issue I had with Cobber was waking him up for his turn to be tested. All around him, there were twenty different species of dogs, barking, yapping, sniffing, breaking loose, breaking wind. I tugged him into the middle of the room: he looked slightly puzzled as to why I had him on a leash, since we rarely used one, and offered to take it from my hand and walk himself.

In the end, Cobber ended up testing the testers: no amount of crazy noises, tossed books, or people yelling as they came at him in a walker could ruffle him. He was in -- and now, so was I.

Initially we were sent to a few different gigs, but the program I had hoped to do -- visiting the pediatric cancer ward at NIH -- was full. Instead they found us a regular weekly spot at the psych ward in a nearby hospital. I was somewhat disappointed, knowing Cobber's talent was with children. In the psych ward we would be dealing mostly with adults who were suffering varying degrees of depression and mental breakdown. But Cobber wasn't disappointed. In fact it was there that he found his true calling as a therapy dog -- and I witnessed the extraordinary healing powers pets have over people.

Imagine this: an elderly man in a dressing gown, slumped in front of, but not watching, a television in the ward's common area. I'm asked to take Cobber over to visit that man, and to start a conversation. Right. Awkward. As I'm mulling over a good "opener" ("How are you?" is obviously out. How about: "Say, that's a nice bathrobe. You look great in plaid...") Cobber has already placed his soft muzzle in one of the man's limp hands. A couple of the man's fingers spring to life and begin to rub the muzzle. Cobber's tail wags, and he eases his big head under the man's fingers for an ear rub. The man obliges, and soon both his hands are at work on Cobber's ears while the man mumbles, "Oh aren't you a good fellow. Yes, you like that don't you?"

I haven't said a word.

Then the man asks, "What's your name big boy?"

"Cobber! That's a funny name! Where'd you get that?"

But the man is now lost in Cobber's face again, and his big Harp Seal eyes that seem to say, "I understand. I know. But it's okay."

Finally we move away. That was nice, I think. But I didn't understand how nice. A few minutes later, a nurse comes up to tell me: "Do you realize that man hasn't spoken a word for two weeks?"

That was a long time ago. Over the years, as Cobber grew older and my life became busier with three children, we stopped doing therapy visits. I felt bad about this, but I just couldn't seem to find the time to resume them.

Then last fall, a fabulous young woman who had taught at my youngest daughter's elementary school, took a job at another elementary school in Southeast Washington. Quite a change of scene. Metal detectors, pregnant sixth graders, knife-fights in the bathrooms. The backgrounds of her first grade students read like social worker case studies: single mothers, drug-abusing mothers, plain old abusive mothers, and very few fathers because the ones who aren't AWOL are in prison.

How would Cobber like to come out of retirement for a morning and visit the class?

A security guard met us at a side door, and led us down a corridor. All seemed pretty calm -- except for a comical moment when some tough kids lingering by the lockers were suddenly nonplussed by the sight of Cobber and took a few nervous steps back.

When we entered the classroom, it felt like the old days -- the children swarmed Cobber excitedly; I cursed myself for not bringing balloons. I should say, all the children swarmed Cobber but one. That one stood in a corner, looking as if his entire body was packed full with anger. In a rage he said, "I wanted to pet him!" and then turned his back to the class. The teacher whispered that the boy was her most difficult student -- "a lot of issues" -- but not to worry about him. He might come around. I spoke to him but he remained sullen and silent. He wouldn't touch Cobber.

The other children, however, were enraptured. Cobber, a little bit creakier now, performed his "tricks." They gave him a standing ovation when he retrieved the newspaper. I then had Cobber lie down in the middle of the group while I read aloud a story about a dog. By the end of the story, every child -- and there were about twenty of them -- had somehow claimed a piece of Cobber's ample, cozy body. All I could see of him were his nose and eyes peering out from underneath a sea of heads.

Of course we had to plan another visit. That one took place just before Christmas. This time, another young man was waiting with the security guard to escort us to the classroom. The young man greeted Cobber with a big hug and chatted amiably as we walked down the hallway. I let him hold the leash and walk Cobber into the classroom. Our program for that morning was to take turns "reading with Cobber" in small groups. The children would each choose a story and read it aloud with "Cobber's help." Mostly that help consisted of Cobber serving as a bean bag chair for the kids to recline upon as they read. Afterwards, the young man excitedly told me about all his favorite books.

"What a nice kid!" I later said to the teacher. "I don't remember him from last time."

So, HuffPost readers, my commitment to you -- or rather, Cobber's commitment -- is to return to service for at least two hours every month. And now Cobber will have a sidekick: his newly adopted brother, Chester, a 2-year-old English Lab who is not yet versed in proper therapy dog manners. With Cobber as his teacher, I know he'll learn quickly. After all, Cobber taught me.