ATLANTA (AP) — The curvy Coca-Cola bottle is celebrating its 100th birthday, and an art museum is exploring the origins and influence of a bottle design that's so recognizable, you'd know the brand if you held it in the dark.

"The Coca-Cola Bottle: An American Icon at 100" opens Saturday at Atlanta's High Museum and is set to run through Oct. 4. Visitors can see original design illustrations, a prototype of the 1915 design and the work of artists who have been inspired by the now-classic design.

Coca-Cola is headquartered in Atlanta. 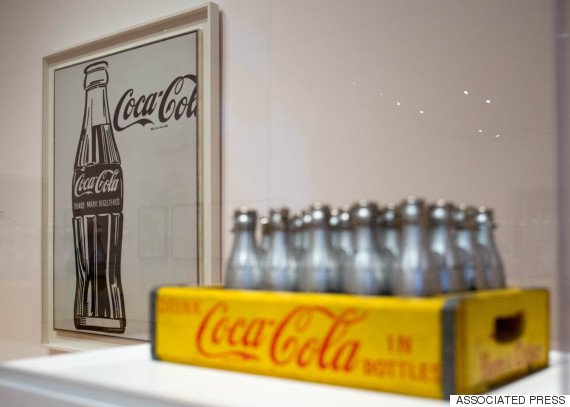 "To do something that not only stays its course for the company over 100 years, but that also becomes a cultural icon that really is recognizable all over the world, is amazing," said High head of museum interpretation and exhibition curator Julia Forbes. "It really is a design success story."

The exhibition walks visitors through the history of the bottle's design, which was conceived as a way to distinguish Coca-Cola from a multitude of imitators.

In a 1915 memo, the company asked glass companies to come up with "a bottle which a person could recognize even if they felt it in the dark, and so shaped that, even if broken, a person could tell at a glance what it was."

The Root Glass Company in Terre Haute, Indiana, developed the winning design in "Georgia Green" glass with a bulge in the center and ridges down the sides. The exhibition includes a concept sketch and patent for the contour bottle design, both dating from 1915. An original prototype bottle from 1915, one of two known to exist, is also on display.

Opposite a display of Coca-Cola bottles through the years are two dozen posters by contemporary designers created in response to an invitation from Coca-Cola last year to imagine the next century. They were instructed to consider attributes like "universal happiness" and "stubborn optimism" and to use the colors red, black and white. 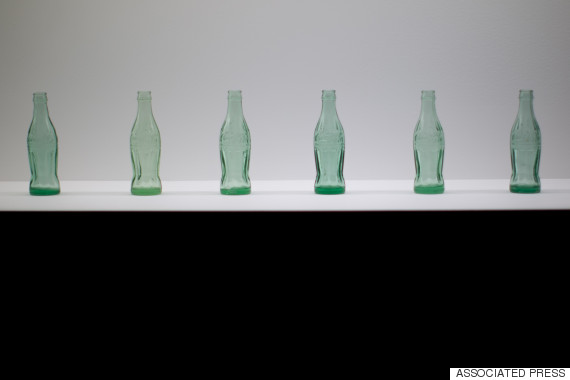 An entire gallery in the exhibition is devoted to Andy Warhol. On one wall are two paintings of single Coca-Cola bottles inspired by old ads, one a bit abstract with smudgy lines and the other with lines so crisp and clean it doesn't even look like a painting. These works from 1961 and 1962 came at the beginning of Warhol's Pop art style using commercial images.

A Warhol quote from 1975 is printed on the gallery wall: "What's great about this country is that America started the tradition where the richest consumers buy essentially the same things as the poorest. You can be watching TV and see Coca-Cola, and you know that the President drinks Coca-Cola, Liz Taylor drinks Coca-Cola, and just think, you can drink Coca-Cola, too."

The exhibition concludes with a gallery of photos from the mid-1930s through the present. In some, the photographer is clearly using a Coca-Cola bottle or logo as art, while in others the bottle and logo just happen to be present.

Two photos of Times Square from the mid-1930s and one from the late 1990s include Coca-Cola advertisements. The logo also pops out in shots of rural highways and stores, as well as urban landscapes. Photographer Imogen Cunningham in 1953 shot landscape photographer Ansel Adams sitting in his truck with a glass bottle of Coca-Cola in hand. 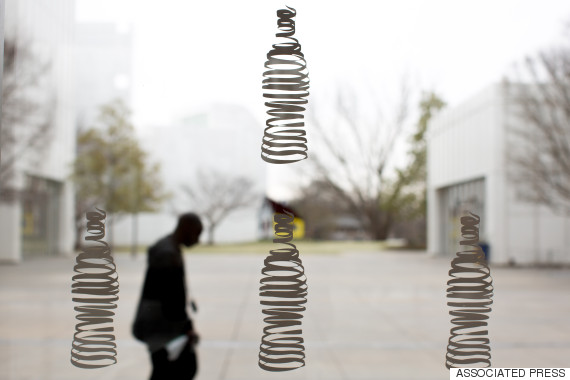 "They show the ubiquity of Coca-Cola," Ted Ryan, who oversees archives for Coca-Cola, said of the photos. "It's in Times Square. It's in China. It's on the street. It's everywhere."

The exhibition is a collaboration between the High and Coca-Cola, and kicks off a yearlong celebration of the instantly recognizable bottle that will include advertisements highlighting its design in more than 140 countries, Ryan said.

"It all starts here at the High," Ryan said. "We wanted to start in our home."