In January of 1971, Bill Backer, a creative director on the Coca-Cola account at the McCann-Erickson advertising agency, was on a flight to London that was forced to land in Ireland due to heavy fog at Heathrow. The result of this diversion was the most popular and iconic (and my favorite) television ad ever created. 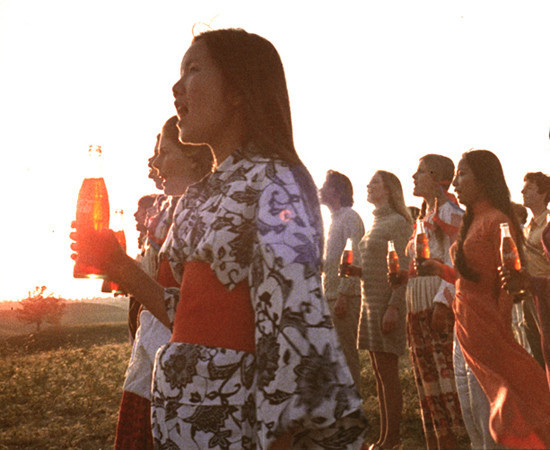 According to his account, as the passengers gathered in the airport coffee shop the following morning waiting for a flight, "Backer noticed that several who had been among the most irate were now laughing and sharing stories over bottles of Coke."

"I could see and hear a song that treated the whole world as if it were a person -- a person the singer would like to help and get to know. I'm not sure how the lyric should start, but I know the last line." With that he pulled out the paper napkin on which he had scribbled the line, "I'd like to buy the world a Coke and keep it company."

Backer took this last line to Billy Davis, formerly of the Four Tops, and English songwriter Roger Cook, and together they wrote the most Zeitgeistic jingle ever written.

The song first aired on American radio in February, where it flopped. The Coca-Cola Company hated it and refused to buy airtime for it. Backer realized the song needed another dimension.

Forty years ago this month, McCann filmed the famous "Hilltop" ad on a hill outside Rome, Italy. Released in the U.S. in July, 1971, the ad, which featured a multicultural group of young people lip syncing the jingle, was a huge hit. By November, The Coca-Cola Company received more than 10,000 enthusiastic letters. People called radio stations asking them to play the commercial and called TV stations to find out when the ad was scheduled to air.

I myself haven't bought a Coke, for me or for anyone, in 15 years. (I won't go into its bone-corroding phosphoric acid or its reported anti-union activities abroad because that would be downright annoying...) But in terms of marketing, it's interesting that the '71 campaign, aired during the height of another long campaign abroad, and the sentiments it spoke to was directed at the middle of America. And that was the middle of America, both up-down and left-right. The popular myth is that it was young adults who most opposed the Vietnam War. The fact is Americans over the age of 50, who served in and lived through WWII and knew the true cost of war, were even more opposed to the conflict in Asia. And peace and multiculturalism, though the purview of love-children, was not yet a "liberal" scourge. I imagine such a campaign would cut a large swath today sending Glenn Beck to the nearest chalkboard to scratch white lines between Coke, the Muslim Brotherhood and George Soros. "It's the Coca-Caliphate, people!!"

But that's what I love about vintage commercials, and this one in particular. They stand as pins in the cultural-political maps. For media-geeks like myself, finding an old ad on YouTube is like finding a spec of gold in a river -- it's what I'm doing for the next two hours. And the '71 Hilltop ad with its bouncy-catchy theme and hippie-dippie charm is a shining example of Golden-Age advertising.

In 1990, the original cast members of the "Hilltop" commercial reprised their roles for a reunion ad, which launched the "Can't Beat the Real Thing" campaign during Super Bowl XXIV.

Scroll down so that the two videos, the '71 version and the '90 version are both on your screen. Mute the '71, start the '90, and 3-4 seconds in, start the '71 (you might need to load it first and pause it). Watch how the young and old cast members appear together!