A new study at UC San Francisco's Ernest Gallo Clinic and Research Center has revealed that cocaine may rewire the brain and drastically affect decision-making after just one use.

While similar studies have revealed such rewiring in long-term use, the new study's results are especially alarming, showing that the brain can be altered after one dose.

Using live mice, researchers from both UC San Francisco and UC Berkeley studied the frontal lobe -- the area of the brain that handles decision-making and memory -- when cocaine was introduced to the body. After one dose, researchers found substantial growth of new dendritic spines, which are "tiny, twig-like structures that connect neurons and form the nodes of the brain’s circuit wiring."

According to researchers, these new spines rewired the brain to seek cocaine, explaining why the search for the drug might override other priorities in human users.

"We've long known that when you become a repeated drug user, the search for more drugs tends to dominate your attention and decision-making," Linda Wilbrecht, an assistant professor of psychology and neuroscience at UC Berkeley and the lead author of the study, explained to The Huffington Post. "But it's quite shocking that these neurological changes happened after just one use."

A series of brain scans exhibited how the spines changed over several days after exposure to cocaine: 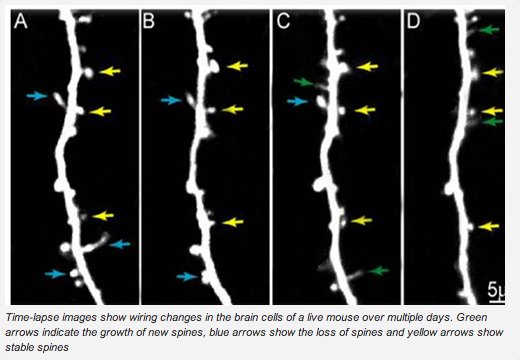 The changes were evident not just in the mice's brain scans, but in the animals' behavior.

“The ones that developed the biggest change in preference for the cocaine side were also the ones that grew the most spines,” Wilbrecht told the LA Times.

"We have limited real estate in the brain, and this shows how drugs dominate what its users think about," she told HuffPost. "Drug exposure fuels drug use, potentially at the expense of other priorities."

However, Wilbrecht explained, because our brains regularly grow and lose new spines, she is hopeful.

"The frontal cortex regulates decision-making and, as we grow up, we make decisions in an increasingly habitual manner," she said. "But the brain can rewire, and it is rewired by lots of experiences. So even though it was so much more rewired by the exposure to cocaine than it usually is, it can return to normal. I see this as evidence that recovery is possible."

These Are Not GIFs