Cockroaches aren't typically known for being cute, but a new species recently discovered by researcher Peter Vršanský and colleagues could change that. If viewed from atop and in the right lighting, the new species appears to mimic the look of a Jawa. That's right: a cockroach that looks like a Jawa. (I bet you never thought those two images would be linked.)

Interestingly enough, it turns out that this visual quirk isn't even the most distinctive thing about the cockroach's appearance. The creature is also bioluminescent, meaning that it produces its own source of light -- i.e., it glows in the dark. In fact, the species represents the only known case of mimicry by bioluminescence ever found in a land animal, according to mongabay.com. 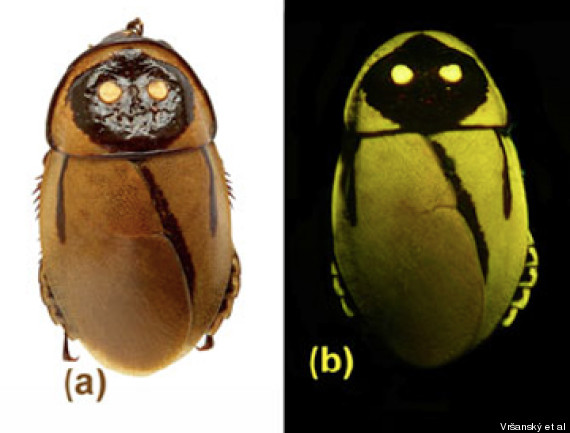 In other words, it would seem that the Force is strong with this one. Well, except in regards to this one dreadful fact: the species may already be extinct.

The only place the cockroach is known to exist is atop the Tungurahua volcano in Ecuador, and that volcano recently experienced a violent eruption. No sightings of the new species, Lucihormetica luckae, have been reported since. It would certainly be a tragic irony if this charismatic animal was wiped out so soon after initially being discovered.

The good news, though, is that Vršanský and colleagues got a chance to study these creatures before the cataclysmic event occurred. What they found was that the bioluminescent patterns produced on the roach's carapace are nearly identical to those of the poisonous click beetle. In other words, it would appear that Lucihormetica luckae, which is not poisonous, has evolved to look poisonous in order to scare off predators. The strategy is similar to that of the nonvenomous milk snake, which looks nearly identical to the deadly coral snake.

Vršanský and colleagues were also able to reveal exactly how Lucihormetica luckae produces its light. The roach harbors symbiotic bacteria within tiny depressions on its body, a highly complex system which is believed to be the most specialized structure of any known bioluminescent insect. The patterns created by the bioluminescence are also unusual in that they are asymmetrical. In fact, this species is the first known case of asymmetrical bioluminescence ever found.

According to Vršanský, the research proves that even creatures considered as terrible as cockroaches "are beautiful if you are sensitive enough."

CORRECTION: A previous version of this entry stated that the cockroach looks like an "Ewok." The cockroach resembled a "Jawa."

1 / 14
Octopuses: A Man's Greatest Fear
A man's greatest fear? Discovery Science reports that in the <a href="http://science.discovery.com/top-ten/2009/mating-ritual/mating-ritual-01.html" target="_hplink">octopus</a> world, it's actually expected that a male's penis will break off during mating. Fortunately, it grows back in time for the next mating season.
Getty