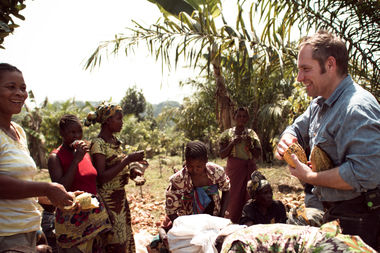 A beloved staple in many a household, chocolate has taken on a richer meaning for family farmers struggling for an improved quality of life in one of the world's most volatile areas, chocolate makers in the Pacific Northwest, and an Oscar-winning director.

Over the last eighteen years, the eastern region of the Democratic Republic of Congo (DRC) has been described as the "rape capital of the world," and a place where reoccurring clashes between armed groups have forced civilians to repeatedly flee their homes. Three years ago, when many high-end chocolate makers were focused on Madagascar, Seattle-based Theo Chocolate, began focusing on sourcing DRC-grown cocoa.

In January 2013 Theo, in partnership with Eastern Congo Initiative (ECI), released two chocolate bars using organic, fair-trade cocoa sourced from farmers in the northeastern region of the DRC. Founded in 2010 by Ben Affleck, the actor and director, ECI is a non-profit focused on cultivating long-term relationships with organizations supporting economic and social development opportunities for the people of eastern Congo.

Affleck visited Theo's factory in 2010 seeking a partner who would help poverty-stricken Congolese farmers by taking the risk of developing a sustainable supply chain to market their cocoa crop. Since then, Theo along with export partner ESCO have trained several thousand farmers to grow high-quality cocoa. Joe Whinney, Theo's founder and CEO, makes periodic trips to the Watalinga area, a mountainous region along the Ugandan border, where most of the farmers are based.

Optimal conditions for growing cocoa beans are in hot, rainy climates like that found in the eastern region of the DRC. The main crop is harvested from September or October thru January or February, and the minor crop in June and July. Some harvesting takes place other months as well.

Earlier this year renewed fighting drove many of the farmers from the Watalinga area across the border into makeshift homes and refugee camps in Uganda. Some farmers who slept across the border were able return to their farms during the day. This spring the United Nations helped restore order and things have started to improve, but the area continues to be unstable.

According to Whinney, the cocoa is "militia proof," meaning when the rebels enter a cocoa growing area, they do not steal the cocoa, because it has no value to them. The value is added back in the states when the cocoa beans are turned into chocolate products. In the DRC, Whinney said cocoa is not just a cash crop, it is a survival crop -- a particularly resilient form of agriculture.

In the DRC, where seventy-one percent of the country's 65.7 million people live below the poverty line, people die from preventable causes at rates far higher than what should be normal.

The premiums Theo pays to the farmers provide additional income, and help pay for important healthcare services and preventative measures like bed nets, as well as school fees. ECI does not currently have direct health care or education programming as part of its cocoa revitalization work, but is working with other partners in the region who can best provide services to address the needs of the farmers who supply Theo. The project is targeting 3,000 farming heads of household, with an average of six family members per household, and a potential to impact as many as 18,000 members of the Watalinga community.

Theo has a transparent pricing system that's based on quality. The higher quality the more money the farmers can make.

Wherever Theo sources cocoa the company partners with a local cooperative, exporter, or NGO to provide technical assistance and advice on agricultural practices to help improve the quality of the yield. In the case of the DRC, ESCO currently provides training. The next step, according to Whinney is to build a program with ECI to expand the farmer-training component.

"I have to say I think there is the opportunity for cocoa to be not only a really strong economic crop for the Congo, but also to protect the incredible biodiversity there," Whinney said. "It could be the real model globally for how to build and sustain a cocoa industry."

"One of the things we were most excited about when we first sampled the Congolese beans are how chocolaty they are," said Vice President of Sales and Marketing Debra Music. "That's been really exciting for us, and in fact we've moved more and more into deepening our commitment to using Congolese beans for fifty percent of our cocoa supply and it's in all of our products - so not just in our ECI bars -- it's in everything."

Today Theo has two 3-ounce bars -- Vanilla Nib and Coffee & Cream -- made from one hundred percent Congolese cocoa. The Congo bars are available on Theo's website and at Whole Foods stores. You can spot the bars in red and tan labels with art inspired by traditional Congolese textiles and wood-carved masks.