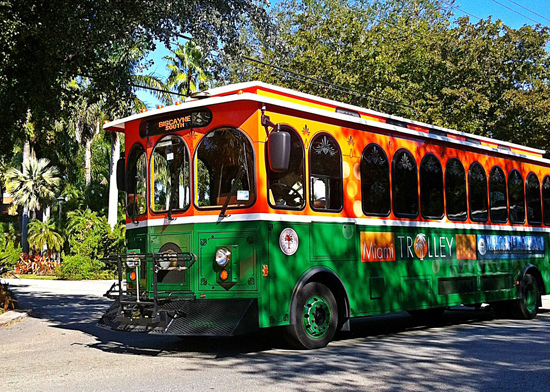 The subject of trolley service into and out of Coconut Grove has been going around for a long time now. I brought it up years ago and now that the City of Miami offers free trolley service to it's business and arts districts, it's the right thing to do to include Coconut Grove. But for some reason, the city leaders refuse to share the trolley with one of the neighborhoods whose taxes pays for the bulk of the free service.

I started a petition at Change.org in order to get some response and to get trolley service into our little village. Currently, the Brickell Avenue line just about touches the North Grove as it goes to Mercy Hospital and then turns back, totally ignoring the rest of Coconut Grove. Residents would love the opportunity to hop on and hop off the trolley, to take it to Coral Gables, which connects their trolley with other City of Miami lines, the Grove residents could take the trolley to Brickell, Wynwood, Coral Way and even Marlins Stadium of the trolley was added.

Just recently we had the Coconut Grove Arts Festival in Center Grove. A trolley would have been a perfect addition to the parking-challenged village on days when hundreds of thousands congregate for an event like this. Same with the Bed Race, King Mango Strut, Seafood and Beer Fests, etc. The trolley service could only help these events.

We (Coconut Grove residents) as City of Miami taxpayers deserve the same city services as other business and arts districts receive in the city. I have been given all sorts of B.S. as to why the Grove doesn't have the trolly. I've been told we have the Circulator, we don't need the trolley. I've been told we don't need a trolley to get from one end of the Grove to the other (the stupidest one since that's not what we want it for), I've been told it will add eight minutes to the route, that that is too long; I've been told that routes are being tested and those that have little or no riders will be swapped out for other routes. I've been told everything as an excuse.

Businesses and residents in Coconut Grove suffer by being left out of the trolley route. It's a quality of life issue. It's here in the city already. It is not on tracks or run by electric current above and can be easily rerouted into the village.

The trolley should connect Metrorail with the rest of the village as does the Coral Gables trolley.

The trolley is a quality of life issue that our taxes pay for. We in Coconut Grove demand the same services as the rest of the City of Miami.

Right now the goal is 1500 signatures, but hopefully we'll get much more. I'll present the petition to the city (the mayor, transportation dept. commissioner, etc.) after it's end date, April 30, 2014.