WASHINGTON -- Medea Benjamin, the leader of the anti-war group Code Pink and perhaps the most easily recognizable protester in Washington, celebrated her 61st birthday in true form on Tuesday night: at a large protest outside the White House during President Barack Obama's national address on Syria.

The scene on the closed-off street was half party and half war protest. At least 100 people swarmed around a table set up in honor of Benjamin's birthday with free cupcakes and lemonade for anyone who walked up. Two women sang peace songs and played guitar; another guy hauled out a popcorn machine. But nearly everyone was also holding a sign or wearing a sticker opposing a military intervention in Syria.

"It seems very apropos to have a birthday out in front of the White House at a time when we're trying to mobilize for peace, but they're a little nervous about us," Benjamin told HuffPost, referring to police officers' response to the gear Code Pink brought to the scene. "They've got some 9/11 jitters."

Someone came all the way from Canada to set up a Jumbotron in front of the White House for the group to watch the president's address. Rows of foldable chairs were set up in anticipation of the screen, along with the aforementioned popcorn machine. One organizer announced, "It's movie night at the White House!" But the police nixed the plan for security reasons. The compromise was leaving the chairs and popcorn machine, but allowing an audio of the speech to play through a small speaker set up on one of the chairs.

Everyone gathered around that speaker for the duration of Obama's remarks -- and their reactions ranged from amusement to fury. As the president described the horrors of chemical weapons being used by the Syrian government, one woman shouted, "Drone victims are just evaporated, you don't see them!" Several booed when Obama said everyone agrees that Syrian President Bashar Assad was behind recent chemical weapons attacks there. "We don’t know," shouted one woman. "No we don’t," responded another. When Obama vowed not to put any American boots on the ground in Syria in the event of a military strike, even more people booed in disbelief. One guy shouted, "Bullshit."

Benjamin, seated front row and center with a "Stop War" sign, also had some choice responses. "Ask an Iraqi about that," she muttered when Obama said the U.S. military "doesn't do pinpricks." When the president said he asked Congress to hold off for now on passing a resolution authorizing military strikes, people erupted into laughter as Benjamin said, "'Cause you couldn't get a vote through!"

Benjamin said Obama's speech was pretty much what she expected, and lamented that he doesn't understand that Americans are war-weary. Still, she said, she thinks war critics are having an effect on the debate.

"In a sense, democracy has won for round one," Benjamin said. "We forced the president to go to Congress, that was round one. Round two, the president decided it wasn't worth getting a black eye going to Congress and having them vote him down. I would say now we're in round three, the Russians have ... presented a solution."

Benjamin described Russia's proposal to have Syria turn over its chemical weapons to international control as "amazing" and "a real possibility" for avoiding a military strike. She shook her head at the way the situation has played out.

"It's seems like this is incredibly accidental, like the whole thing is accidental," she said, laughing. "Obama spoke the words 'red line' -- that was accidental. Kerry said in a press conference 'maybe' Syria would hand over weapons, now it's becoming the plan forward. This is crazy."

Benjamin added, "This isn't how policy should be made."

Scroll down for scenes from the Code Pink protest/birthday party. 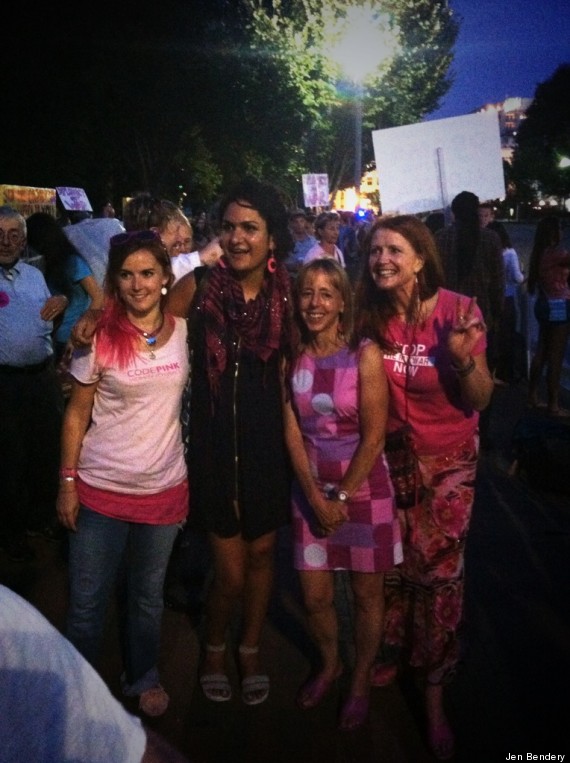 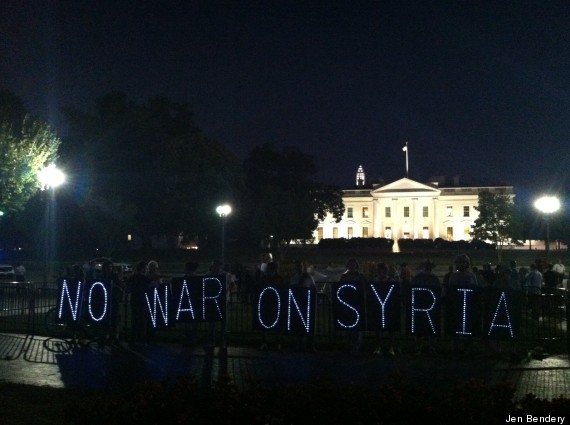 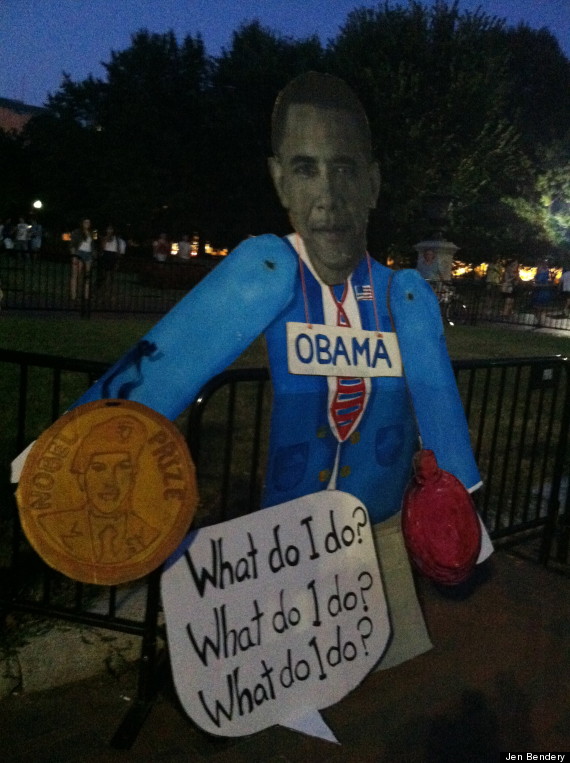 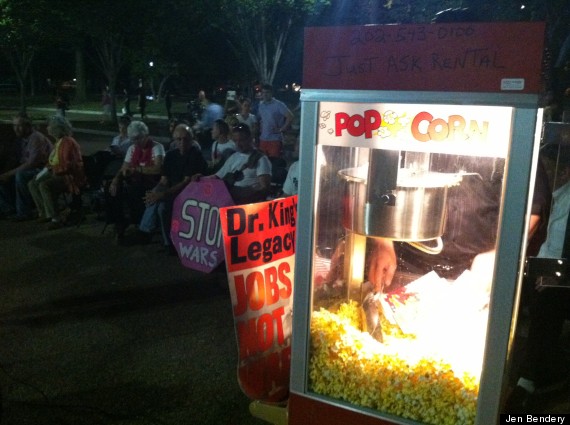 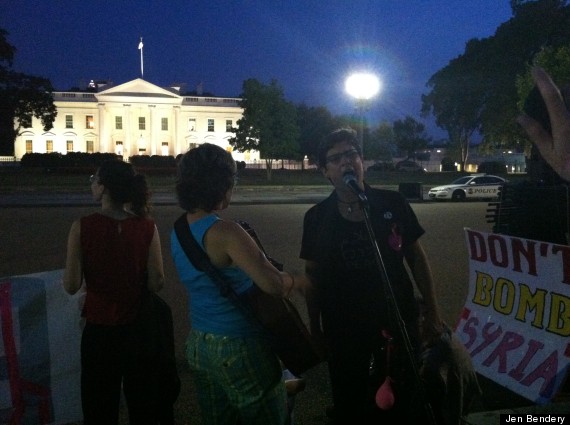 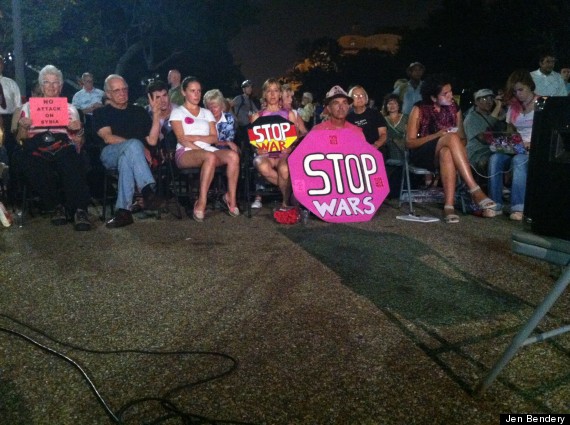 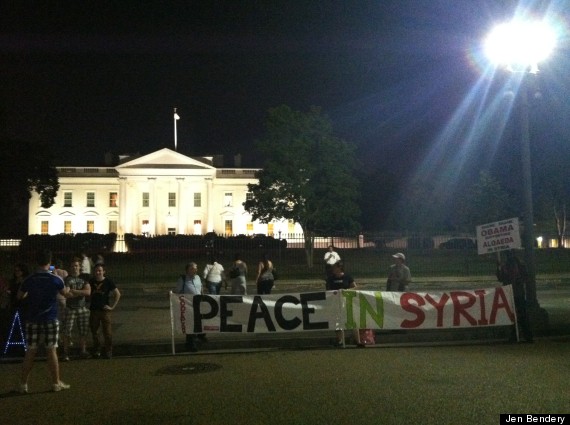