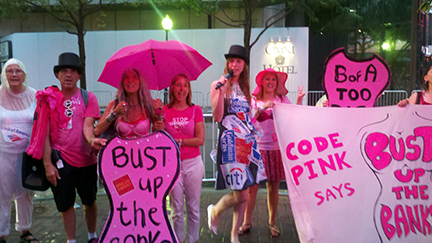 Code Pink, the women-initiated peace and social justice group, protested the War on Women at the Republican National Convention. Their message for President Barack Obama and Democrats targets the military-industrial complex.

At the People's Convention, sponsored by Progressive Democrats of America (PDA), Code Pink co-founder Medea Benjamin spoke against war -- particularly drone warfare -- and called for Congress and the president to make dramatic cuts to the military budget.

At the PDA event, she said that there are strong, powerful men like Arizona Sen. John McCain, who are standing up against cuts to the military budget, which are scheduled to go into effect due to sequestration.

But where is the movement to protect Pel Grants, Medicaid, and other social programs? According to Benjamin, the US could cut the military budget by 80% and still have the largest military in the world.

"Slash the Pentagon and put that money into life-affirming activitieis, which is what the people on the planet need," Benjamin demanded.

Attacking the other sector of the military-industrial complex, Benjamin and other Code Pink protesters wore pink bras on the outside of their clothes and shouted "Bust up the banks" in front of Bank of America, which is headquartered in Charlotte, host city of the Democratic National Convention.