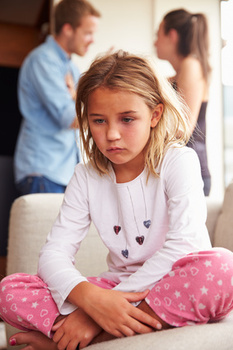 Although the codependent parent is harmed by their narcissistic partner, their codependency should not be considered a valid excuse for not protecting their children. Even with the all-powerful Human Magnet Syndrome, the adult codependent parent, like all other adult parents, carries the responsibility to care for and defend their children. However, the stark and most unfortunate reality is they predictably fall in love with pathological narcissists who they feel intractably bonded to, despite feeling abused, neglected and/or deprived. And when they become parents, they often choose staying in the relationship with the harmful narcissist over protecting their children.

Most codependent parents sincerely do not wish any harm to befall their children. In fact, they go to extraordinary measures to stop, mitigate or buffer the narcissist's harm or abuse of the children. Despite their best intentions, they are unable to stop the resulting disregard and/or mistreatment that everyone in the family is forced to endure, except, of course, for the offending narcissist. The codependent's inability or unwillingness to shield the children co-creates a toxic family environment in which the children are harmed and their future psychological health is compromised.

The codependent's compulsive desire to satisfy the narcissist's insatiable selfish needs, while also trying to control or coerce them to behave less narcissistically, results in a depletion of their energy, time, focus and emotional resources, which would otherwise be given to the children. Trying to control a person who, by definition, cannot be controlled, while unsuccessfully seeking love, respect and care from them, results in a hamster-wheel experience where their physical and emotional resources are exhausted. Tired and beaten down, they often shut down and disconnect from their parental responsibility to protect their children (and themselves).

Although I am suggesting that codependents share responsibility for the harm of their children, caution must be taken when attributing blame. Codependent parents similarly grew up in a family in which all the children were held captive by the neglect and/or abuse of a codependent and pathologically narcissistic parent. They are clearly victims of their childhood environment. In addition, without their attempts to protect their children and the love and nurturing they did give them, the sum total of psychological harm to the children would be far worse compared to being raised solely by a pathological narcissist.

Many a codependent client has lamented over how much they resented and were angry at their codependent parent for not protecting them and not divorcing or leaving the abusive narcissist. In fact, these same clients recall numerous occasions when they could have been protected or removed from harm's way, but were not because of their codependent parent's distorted sense of responsibility, loyalty and feelings of completely powerlessness. Adding insult to injury, their need for security, nurturing and safety was traded for their parent's fear of living alone and feeling shameful, broken and pathologically lonely.

Often, in the beginning of codependency treatment, my clients are unable to wrap their arms around the concept that their "wonderfully loving and nurturing" codependent parent should share any responsibility for their neglectful or abusive childhood. After working hard in codependency-specific psychotherapy, there comes a time when the codependent client is psychologically healthy enough to let go of the "good" codependent parent fantasy, and realistically hold them partially responsible for their traumatic childhood.

Although this process often begins with anger and a need for accountability, it eventually transforms into a willingness to empathize, accept and forgive their codependent parent. In the process of being honest about who their parent really was and how much they were harmed by them, they are able to "own" their own codependency, while better understanding what they are doing or have done to their own children.

The codependent parent who disassociates from their Human Magnet Syndrome fueled desire/attraction to pathological narcissists also harms their children. Although this type of codependency, which I have coined "codependency anorexia," protects both the codependent and her children from narcissistic abuse, it is still harmful.

By depriving oneself from psychologically healthy, intimate adult companionship and the children from a second parent, the children are ultimately deprived of another adult who deeply loves, respects and cares for them, and who is unconditionally committed to their life-long welfare. In addition, they are deprived of an opposite sex parent who provides an alternative gender perspective and form of nurturing. In addition, raising a family, while purposely avoiding a romantic or intimate partner, sends a message that such types of adult relationships may be dangerous and harmful.

Codependency anorexia often results in the codependent parent unfairly and inappropriately seeking to meet their emotional, social and personal needs through their children. This form of enmeshment is often referred to as emotional incest, which is harmful to a child's psychological development.

The purpose for writing this article was not to slam or denigrate codependents, as I am a recovering codependent and a psychotherapist who is dedicated to helping this unique and underserved population. It is my intent to raise awareness about the dysfunctional parenting dynamics that are unique to the codependent/narcissist relationship, while giving codependent parents a loud but supportive wake-up call.

Yes, despite your giving, sacrificing and altruistic motives, you too are hurting your children. Even with your superior parenting skills and your genuinely loving ambitions, you are still a partner to the dysfunctional process that is harming the people you love most. I am hopeful that this article will inspire and motivate you seek help for your addictive and compulsive self-harming pattern of being stuck and frozen in relationships with pathological narcissists. Join me in protecting our nation's most valuable resource: our children.