One of the first things I learned in seventh grade Latin class was that "the poets loved the women." (Poetae feminae amant.) I was happy to learn that the affection was returned (Feminae poetae amant.), which to my 12-year-old mind meant that a kid who preferred literature to sports, at least in antiquity, had a shot with the girls. Our textbook was mum on the affections of ancient Olympians, but farmers (agricoale) were evidently plenty amorous as well. Food and poetry -- the essentials.

Over the next two years I would struggle with conjugations and declensions and tenses (Oh, my!) as my reading and understanding became more sophisticated and ran the gamut from Cicero to Quintilian. What I didn't know at the time, though, was that in addition to reading some of the most classic literature mankind has ever produced, I was also learning how to learn. The process of learning Latin, particularly in the middle grades and early high school is that it familiarizes the student with a specific information system and at the same time teaches systematic thinking, which will be applied to any other learning throughout one's lifetime.

Sadly, Latin is no longer taught widely, thought of as rarified or, in some cases, even elitist. So, where does a student learn to understand systems and think systematically in today's world?

In many educational circles there is a great emphasis on children learning coding from even the youngest ages. It's widely promoted as a means of preparing children for the technologically driven world. That's true, and at the same time, it is the way that children learn systematic thinking. It may lack the linguistic and philosophical benefits of Virgil, but it is an essential building block in creating a foundation for learning.

That being said, coding has, of course, become fashionable, and there are all sorts of products being launched that promise to teach your toddler to code. Most of them are not very effective, and some of them are downright rotten. The fact of the matter is that junior is probably not going to become a coding prodigy by playing with a toy. Indeed, even the best toys do not "teach" anything. They provide a platform for experiences, and any learning occurs organically through the child's interaction with them over time.

So, these toys that promote teaching coding are not doing that so much as they are providing a framework for systematic thinking and an understanding of how to take a problem apart and have the intellectual tools to put the pieces together in various ways in the search for a solution or desired outcome. Figuring out what instructions you need to send to a robot, then, is essentially no different that figuring out the vocabulary, tense and grammar of a sentence that communicates successfully.

At ttpm.com, we've been studying and reviewing toys that promote learning coding. Many of them are robotics. Interestingly enough, though their technology is very sophisticated, the learning experience is not much different from the mega-hit robot of 1960, Mr. Machine. He showed up at a time when robotics was in its relative infancy, and children were fascinated by this character who came to life mechanically.

Fast forward to 2015, and meet Dash and Dot from Wonder Workshop. Of all the coding toys we've reviewed so far, this is the one that has impressed the most. It's impressed us not because of its groundbreaking design but because the entire process is based in self-directed, open-ended play. Kids we've observed become engaged by the characters and instantly anthropomorphize them. It's not about learning equations and algorithms to achieve a result. It's about making this cool little guy (or girl. You personalize each one.) do whatever the child wants it to do. The child is in almost complete control of the play and by experimentation and discovery is without knowing it, having an experience that creates and reinforces systematic thinking. When those experiences and that thinking is applied successfully to other tasks, we can say with confidence that learning has occurred and, as noted, it happens most effectively in child-directed play, at least for the younger kids.

In the rush of fashion that generally follows any "new" trend of education, it's important to remember that what we want to be teaching children are intellectual processes and not focus on results. While there are certainly more future job opportunities for kids how know how to code than can quote Cato, our primary goal should always to be develop independent thinkers and problem-solvers, however that's achieved. 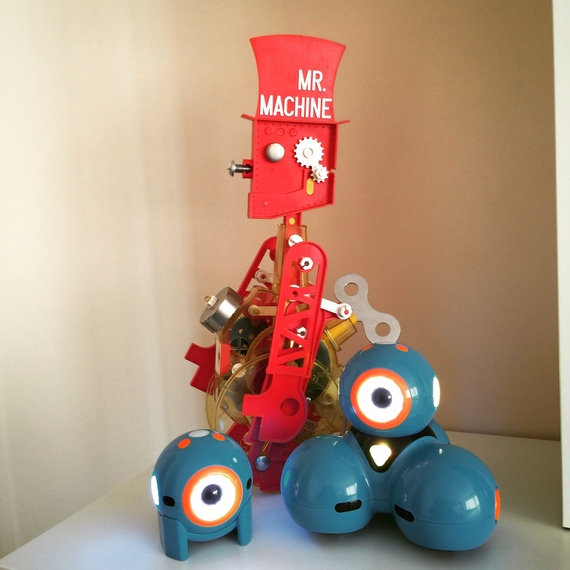 Mr. Machine and Dot and Dash may have 55 years of technology between them, but they still fascinate kids in the same way.