Should "coding" be taught in all-American public schools? We know the U.S. is falling behind the rest of the globe in the Science, Technology, Engineering and Math (STEM) fields. By exposing kids to coding, starting in kindergarten, we give them the tools they need to both compete and make smart life choices in a digital world. 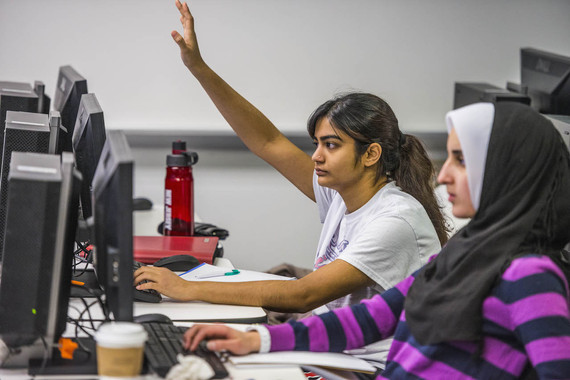 Coding is how technology, including software, apps and websites, is created. There are thousands of coding languages, such as JavaScript, Python and SQL, and early exposure helps young people understand and interact with the devices that provide the means to shape our technology-driven culture.

Coding is valuable in that it teaches problem solving, design and innovation. It is practical in that it creates solutions to immediate challenges. It is creative in that it allows people to imagine and invent with few boundaries. It is liberating in that one can go from knowing code to owning one's own company. It is equalizing in that code is not limited by the stigmas humans readily cling to, such as race, gender, ethnicity, sexual orientation and religion.

But even more exciting, children love to code. That's why the U.K. last year infused coding into the national curriculum starting at age 5. That's why there are movements all across Asia to get young people, particularly girls, to code. They understand that you don't expose young people to code simply to create a bunch of computer scientists. Exposure to coding can open up a love of learning that builds pathways to other critical skills, including many important ones in STEM.

One can win a Nobel Prize in literature because of the value we place on the perfect creation of new worlds through language. But even a novel with intricate story lines is limited by the author's ability to tap into readers' imaginations. Coding allows authors to create worlds that can actually be enhanced by users, and therefore has exponential potential to magnify such cherished human experiences.

Coding is empowering. At a recent women's conference on NJIT's campus, speakers from students to executives told passionate stories of finding their voices through code. Yet when we think of the leaders of the digital revolution - Bill Gates, Steve Jobs, Alan Turing, Claude Shannon - men clearly have dominated the realm. Who wants to keep it this way?

According to Code.org, a non-profit dedicated to increasing access to computer science, 90 percent of American schools don't offer coding yet, by 2020, there will be about a million more computer jobs than computer science students. In 24 states, including New Jersey, students can't even count computer science for credit toward high school graduation.

Imagine a world where the new form of slavery comes from those who know code, such as hackers, placing digital shackles around those who don't. That time isn't very far away. Hackers succeed because lawmakers and others don't understand their world. They don't react fast enough nor do they legislate deep enough to cover the myriad ways in which one hacker can wreak havoc on world systems. So whether we want our daughters and sons to become lawyers, doctors or entertainers, in a digital world they will not be truly successful unless they understand code.

When I was a child, I could spend hours with my imagination and a crayon. Today's children also know how to use a tablet before they can walk. This monumental leap forward undoubtedly has an effect on cognitive thinking. I encounter children who are exhibiting, at younger and younger ages, deductive reasoning skills and other forms of higher thinking. They need coding as an outlet. Have you ever seen what happens to smart children when they are bored? When they're not using those creative juices in a positive way, they use them in ways that can be destructive.

So not only must coding be integrated into curricula, it has to be done properly. Teachers, most of whom weren't raised in the digital age, need to be prepared and trained well. The state of New Jersey recently awarded NJIT a $1.2 million grant to develop resources for teachers so they can better implement STEM education. It's a terrific model for how this can be done quickly. Quite frankly, we have little time to lose.

Each year, NJIT graduates some 3,000 students, almost all of whom go on to graduate school or productive jobs. NJIT alumni are in demand, and a recent Brookings Institution report shows that they are in the top 1 percent for occupational earners nationally and in the top 10 percent for mid-career earners.

They're in demand because they have the leadership, skills and flexibility essential in today's markets. Let's widen the talent pool and equip more students by teaching coding in public schools.