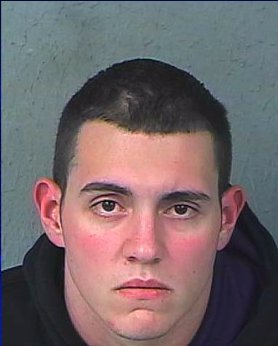 A former detention officer in Florida has lost his job after being charged with child abuse.

The horrific abuse that 21-year-old Cody Marrone allegedly inflicted on a 3-year-old toddler has left the boy with severely burned legs and genitals.

On Jan. 17, Hernando County deputies arrested Marrone after they say he confessed to burning his girlfriend's toddler with a hair dryer because the little boy wanted to play and Marrone wanted to sleep, according to WTSP.

The mother of the child, Meghan Sherron, spoke exclusively to ABC Action News last Thursday about her child's injuries and the ex-boyfriend she once thought could be trusted.

Marrone -- who at the time was her long-term, live-in boyfriend -- had watched her son, Ethan, many times before without incident, Sherron explained.

"Cody never even raised his voice to me," she said.

When Ethan began complaining about his pain, saying only "pee pee owie," Sherron pulled down his diaper and saw that his genitals were swollen to the size of a softball. The boy also had burn marks on his thighs, buttocks, and chest.

"When I saw the marks on his behind, I [thought], that looks like my blow dryer," she said.

When she asked her son what happened, the boy became quiet and unresponsive.

At the hospital, Marrone allegedly said he "woke up and found the baby that way," according to Sherron.

Marrone was arrested after eventually admitting his crime, according to an arrest report obtained by Bay News 9.

The boy suffered scarring, and doctors said he narrowly avoided needing a skin graft after spending three days in the pediatric burn unit. Sherron said she can no longer go to work because she has to take care of her son, changing his bandages multiple times a day.

"I can't stop thinking about...what my child was going through. Doctors I talk with say this wasn't a short thing. It took time," she told ABC.

Marrone has been charged with aggravated child abuse and child neglect and has been fired from his position at the Hernando County Sheriff's Office. Marrone is now out on bond.

Sherron said Marrone has a 4-year-old son from a previous relationship. That child is now in the protective custody of his biological mother.

Cody Marrone Burns Toddler's Genitals With Hair Dryer: Cops
Missing Children
1 / 21
RAjena Linson
RAjena Linson left her Detroit, Michigan home on the evening of Oct. 4, 2014, after getting into an argument with her mother. She has not been seen since that time.&nbsp;<br><br>Click here to submit information to the&nbsp;<a href="http://www.blackandmissinginc.com/cdad/Tip.cfm?misID=1955" target="_blank">Tip Line</a>.
http://wwwblackandmissinginccom