Even though you have a cup every day, you may still be surprised to learn how it's affecting you (and your mood and your sleep…).

1. Not Realizing That Coffee's Power Over Women Waxes and Wanes
What you do: You get the same-size brew every day of the month.
How it affects you: Hormonal fluctuations can slow down caffeine metabolism, explains James D. Lane, PhD, a professor of medical psychology at Duke University Medical Center in Durham, North Carolina, and a longtime caffeine researcher. This is why women who are pregnant (most docs agree that one cup a day is fine during pregnancy) or taking estrogen-containing contraceptives may feel like a little caffeine goes an extra-long way. Lane's studies have also shown that the process is slightly slower during the times of the menstrual cycle when estrogen is highest.
What to try: Try a smaller size cup during the late luteal phase of your cycle (or when you usually experience PMS) to see if it makes any difference in how you feel and how you sleep.

2. Using It to Replace Cigarettes
What you do: After finally giving up smoking, your French press becomes your new best friend.
How it affects you: Lane says that smoking is one of the few things that can slightly blunt a caffeine buzz. He explains that the chemical by-products of tobacco kick the liver into high gear, which spurs it to metabolize caffeine faster. Because of that, research has shown that smokers have a higher caffeine tolerance and need three to four times more than non-smokers to get the same perk-up effects.
What to try: When smokers decide to quit, it's important they realize that the same amount of coffee they usually drink could make them feel agitated, irritable and extra-jittery—not a welcome state at any time, but especially when trying to stick to a tough resolution.

3. Drinking It Too Late...in the Morning
What you do: You follow the medical recommendations to finish your mug before 11 a.m.
How it affects you: New research shows that some people have a gene that causes them to metabolize caffeine quickly, while others can take two or three times as long, says Lane. This means that if you're one of those people who are genetically predisposed to be very sensitive to caffeine, the 8-ounce cup you drink in the morning might not be completely out of your system until after your bedtime.
What to try: There isn't an accessible genetic test to find out which kind of coffee metabolizer you are. But if you're doing everything else the sleep docs tell you to do and you're still finding it hard to nod off, make sure you don't have any caffeine for at least 12 hours before you go to bed. (You can track your caffeine consumption using an app like Caffeine Zone 2 Lite)

4. Trying to Sweat It Out
What you do: You have one refill too many, so you go for a run to get the caffeine out of your system. (Or you try to soak it up with starchy food. Or you drink tons of water in an attempt to, well, flush it out.)
How it affects you: Caffeine molecules circulate through your bloodstream and are eventually broken down by the liver into an inactive form that's then excreted through the kidneys. Experts say there isn't anything you can do to speed up the process once it's already begun.
What to try: Caffeine exaggerates your response to stress, says Lane. This means that regulating your emotions will make you much less likely to have a full-blown caffeine-induced freakout. When you start to feel agitated, Lane suggests going into a quiet room (or putting on noise-blocking headphones) and doing the things that you would typically do to de-stress: meditate, perform a few sun salutations, practice deep breathing.

5. Thinking Espresso Is for Die-Hards Only
What you do: You shy away from espresso because you think the extra caffeine will make you feel wired.
How it affects you: Espresso packs a concentrated punch of caffeine—but that's why it's served in tiny cups. So a standard shot of espresso actually has significantly less caffeine than an 8-ounce cup of regular Starbucks brew (75 mg vs. 180 mg). Studies show that the sweet spot of caffeine is between 100 mg and around 400 mg—more than that, and you will find yourself climbing the walls.
What to try: An espresso can be a convenient alternative to an easy-to-spill mug for days when you need a fast fix.

PHOTO GALLERY
Dr. Oz: 5 "Vices" That Can Be Good for You

5 Mistakes Coffee Drinkers Make
Dr. Oz: 5 "Vices" That Can Be Good for You 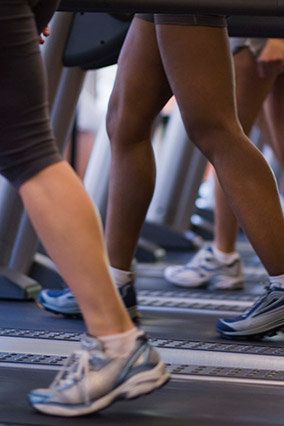 1 / 5
Habit: Skipping the Gym When You're Short on Time
Good News: You can work out less--if you move more. In one 2013 study, people who stood for a total of two hours and walked for four hours daily had greater insulin sensitivity (which reduces the risk of diabetes and heart disease) than people who completed an intense workout for one hour but were mostly sedentary for the other 23. This may be because muscle contractions from more sustained movement stimulate the production of an enzyme that helps regulate glucose.
Thinkstock